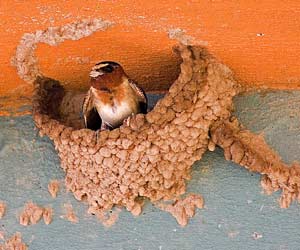 According to authorities Charles R. and Mary B. Brown, The Birds of North America, the Cliff Swallow is one of the most social - and more quarrelsome - of all our landbirds. During the breeding season, it lives in colonies that may have hundreds to thousands of pouch-shaped mud nests attached to stony surfaces. Before the 20th century, the bird spent its breeding season primarily in the rocky foothills of the mountains of the West, typically nesting beneath the ledges of cliffs and canyon walls. During our expansive 20th century, it extended its breeding season range dramatically, both northward and eastward, capitalizing on nesting sites offered by newly constructed bridges and buildings.

The Cliff Swallow’s modern, expanded summer breeding range extends from western Alaska to southern Mexico, and spans southern Canada and the continental United States from coast to coast (except for our southeastern states). The Southwest populations’ non-breeding, winter ranges, although imprecisely known, appear to extend through Central America and deep into South America. Its fall and spring migrations each last for several months. 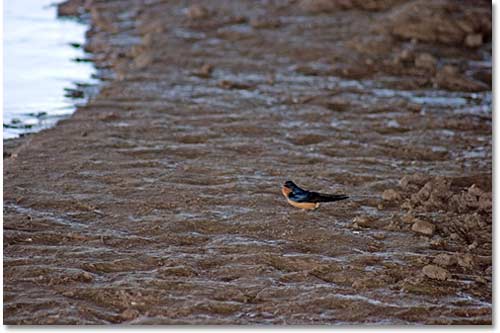 Typically, according to the Browns, the Cliff Swallow’s preferred breeding season habitats lie near bottomlands, open forests, cultivated fields or grasslands - locations with concentrations of flying and swarming insects, the bird’s favorite prey. It favors locations near streams, lakes or ponds, particularly if there is a source of mud for use in nest building. It normally avoids open desert basins and dense forests that lie beyond reasonable access to water and mud. It may set up housekeeping at elevations ranging from near sea level to some 9000 feet.

The Cliff Swallow's preferred nesting sites - in the foothills of the mountain ranges of the West - includes cliff faces and canyon walls in drainages, hills, escarpments and rock outcroppings. Its preferred sites - in its more recently adopted, expanded habitats - include vertical concrete surfaces beneath horizontal structural ledges of highway bridges and culverts and buildings.

The bird’s winter habitat, even though not definitively mapped, appears to include marshes, fields and grasslands. During the non-breeding season, it may be nomadic, moving and searching continually for insect concentrations. Its migratory routes take it across a wide diversity of landscapes, sometimes moving with flocks of thousands.

Prior to and during nesting, the Cliff Swallow typically forages as part of a flock, which facilitates discovery of insect prey concentrations. Those “...nesting in larger colonies feed more efficiently and deliver more food to the offspring...” say the Browns. The bird also drinks as part of a group while skimming the water’s surface.

With the approach of mating, the cantankerous Cliff Swallow may fight for a nest site, especially in the more central and protected parts of a colony. It may peck and flog a competitor. It may also attack or defend a completed nest, doing battle at the entrance or within the nest itself. For good measure, it may chase a competitor in flight or knock it from a perch. It may raid an unattended nest, attacking, and sometimes even killing, nestlings. 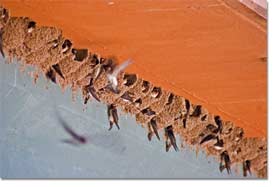 Cliff Swallow nests, with many shared walls,
beneath bridge.

A Cliff Swallow pair builds a nest with approximately 1000 mud daubs and lines it with grass, often sharing walls with adjacent nests. The pair may also refurbish and reuse a nest from a previous year. When breeding, the male and female mate at a nest, often before it is complete, sometimes falling from the nest during the act of copulation. They form a relationship marked by marginal mutual tolerance, short duration and the male’s philandering.

A few days after mating begins, the female starts laying cream-colored eggs in the nest. Given a chance, she may lay an egg in another female’s nest, or she may transport one of her eggs to another nest. She may even summarily discard an another bird’s egg from another nest. Of course, she may suffer reciprocation by other females. In the end, the male and female usually raise a clutch of perhaps two to six eggs of mixed parentage.

The male and female incubate the eggs for about two weeks, when hatching begins. The parents dispose of the egg shells, dropping them from the nest entrance. For the next three weeks, both forage for insects, compressing them into paste-like balls and feeding them to the naked, reddish-colored and clamoring young. Over the following week, through fledging, the parents continue to care for the young, feeding them in flight, guiding them home at dusk. The two dissolve the family bond after the fledglings reach independence and join juvenile flocks.

With the end of summer, the Cliff Swallow begins to feel the call of its winter home.