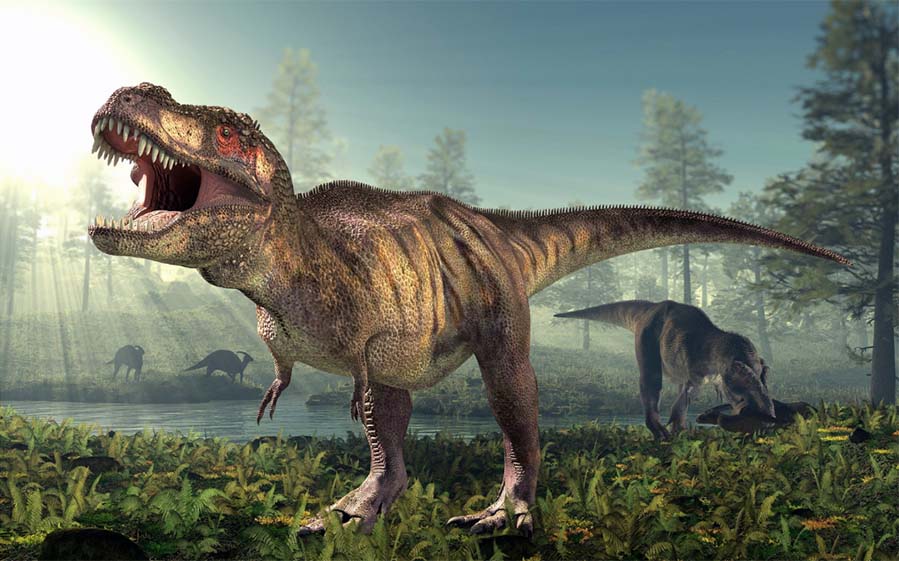 Tyrannosaurus, a theropod, falls in the order of Saurischia.

Scientists classify dinosaurs within a larger group of animals called archosaurians, which also includes crocodiles, alligators and their relatives – pterosaurians (extinct flying reptiles such as pterodactyls), birds and thecodonts, the earliest archosaurians.

Dinosaurs were the dominant land animals on the planet throughout the Mesozoic Era (from 245 to 65 million years ago) but became extinct at its close. They were divided into 2 distinct divisions -- the Saurischia (lizard-hipped dinosaurs) and Ornithischia (bird-hipped dinosaurs).

Dinosaurs ranged throughout all of what is now the North American desert region. During the Mesozoic era, these areas changed from a tropical climate, when the continent was near the equator, to a more temperate and arid one.

Dinosaur habitats were probably as diverse as the animals themselves – from lowland forests of cycads and conifers, to aquatic, littoral, or marine shorelines and to arid deserts.

Mammals and dinosaurs both made their appearance in the Upper Triassic period (about 225 million years ago). Mammals remained small and insignificant throughout the Mesozoic, while dinosaurs ruled the Earth. But contrary to popular belief, dinosaurs represented less than 10% of the 40 groups of reptiles from the Mesozoic era. Other large prehistoric beasts such as pterodactyls, icthyosaurs, sea-serpents, giant lizards and pelycosaurs are not classified as dinosaurs.

It is believed that the early dinosaurs descended from bipedal (walked on 2 legs) archosaurs called thecodonts. Many remained bipedal throughout the group's history, but in both dinosaur orders, many that became herbivores developed a four-footed mode of locomotion.

Of the three known suborders of saurischian (lizard-hipped) dinosaurs that evolved, the two main types were the theropods and the sauropods. All carnivorous dinosaurs belonged to the theropod group, and almost all of these were bipedal with sharp teeth, like the earliest dinosaurs and their thecodont ancestors. Some evolved into the most well-known of the Jurassic period: allosaurus and tyrannosaurus, which had huge skulls, many razor-sharp teeth and reached a height up to 18 feet and a length of about 50 feet.

Herd of Diplodocus by a Stream
Diplodocus is a sauropod, in the order of Saurischia.

Sauropods, with massive bodies, powerful limbs, long tails, long necks and small heads – were the largest of all dinosaurs. They included the huge, 4-footed plant eaters diplodocus, which reached a length of 87 feet, and the heavier brachiosaurus, which weighed as much as 80 tons. In their Jurassic heyday, they were the dominant herbivores on Earth, but by the end of the Age of Dinosaurs they had been replaced for the most part by armored, horned and duck-billed dinosaurs.

All ornithischian (bird-hipped) dinosaurs were plant eaters. They were especially dominant during the Cretaceous period. They did not grow as large as some of the saurischians but were notable for their armor and other strange adaptations. They comprised two main groups: cerapods – which included the ornithopods, pachycephalosaurs and ceratopsians – and ornithopods – included the hadrosaurs and the iguanodonts, which were bipeds with duck-like mouths and several hundred teeth used for grinding hard vegetable matter.

The pachycephalosaurs were bipeds with dome-shaped skulls, while the four-footed ceratopsians, such as triceratops, had a broad bone protecting the head and neck and a long horn or horns projecting from the skull. Another ornithischian group, the thyreophorans, included the armored dinosaurs. 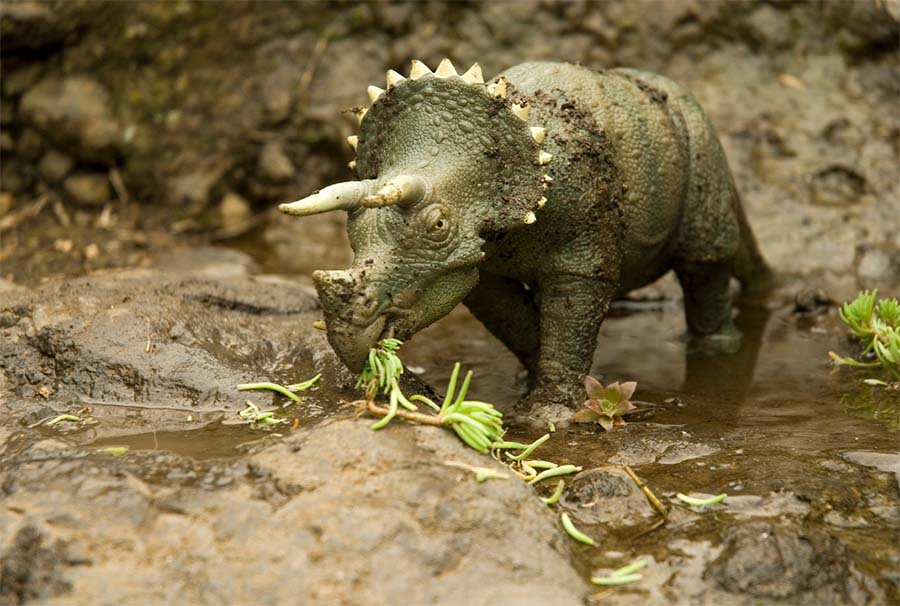 Triceratops, a ceratopsid is in the order of Ornithischia.

In the Jurassic period, the main group of armored dinosaurs was the stegosaurian group, the most familiar of which is stegosaurus from what is now the United States. This 20-foot-long oddity had a double row of upright triangular plates that ran down its back, followed by four spikes on its tail.

The ankylosaurians, who flourished during the Cretaceous period comprise the other main group of armored dinosaurs. The biggest and best-known of these was ankylosaurus itself, which lived at the end of the Cretaceous, had small front legs and large back legs. Instead of erect plates, however, ankylosaurians had flattened armor all over the top and sides of their bodies. 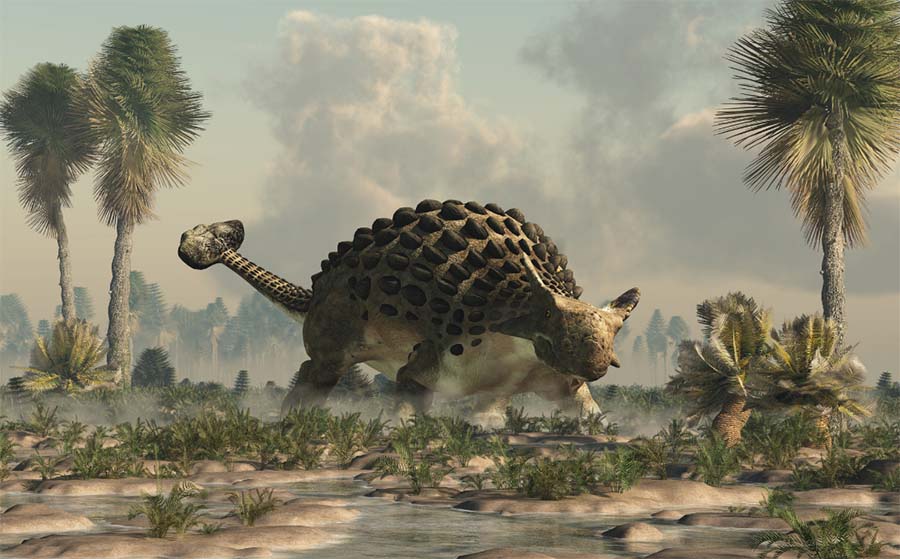 Ankylosaurus, an ankylosaurian is in the order of Ornithischia.

Most dinosaurs had long tails, but they held these tails straight out and off the ground for help in maintaining their balance, rather than dragging them along the ground as had been previously thought. Contrary to the traditional image of dinosaurs as sluggish, slow-moving beasts, many of them were swift-moving creatures with relatively high metabolic rates.

The discovery that many dinosaurs probably walked upright and that many dinosaurs appear to have been adapted to running, not crawling, has led many paleontologists to the conclusion that they were neither "warm-blooded" (endothermic) like modern mammals, nor "cold-blooded" (ectothermic) like modern lizards. Today, most specialists believe dinosaurs probably relied on a combination of both endothermic and ectothermic mechanisms for thermoregulation. New unofficial terms, such as metathermic and gigantathermic have been proposed for this condition in Mesozoic dinosaurs.

Fossil eggs have been found from only a few species of dinosaurs but it is likely that all dinosaurs reproduced by laying eggs. Baby dinosaurs grew very quickly and, in some cases, increased in size as much as 16,000 times before reaching adulthood.

There is evidence that some hatchlings were cared for by their parents. The fossils of many plant-eating dinosaurs have been discovered in herds made up of both adults and young, indicating to some researchers that dinosaurs were maternal.

The discovery in 1978 of 14 dinosaur nests in a Montana excavation helped convince paleontologists that dinosaurs built vast colonies in order to better care for their young, much as today's penguins do. Living in groups may have also helped some dinosaurs defend against predators. It is also possible that some carnivore dinosaurs hunted in packs, and that together they could kill larger prey than a single dinosaur could on its own.

The exact cause of this extinction has puzzled scientists for decades. One theory suggested that mountain building activity so changed the environment that it destroyed the lowland habitat of the dinosaurs. But the "asteroid theory" of dinosaur extinction – that an asteroid or comet striking the Earth at the end of the Cretaceous period caused the extinction of the dinosaurs by raising a huge dust cloud that lowered global temperatures -- has gained great popularity. While most dinosaur specialists are willing to accept that an asteroid struck the Earth about this time, they do not agree that it was the only cause of the Mesozoic extinction.

Whatever the cause, the massive extinction of many species, in addition to the dinosaurs, marks the beginning of the Cenozoic era and the Age of Mammals. For whatever reason, mammals survived this extinction, and thereafter, filled many of the eco-niches left by the dinosaurs and other extinct species.

It is usually supposed that dinosaurs left no direct descendants, a view that has been challenged and is now a matter of intense reexamination by paleontologists and evolutionary biologists. Today, many experts agree that birds are the direct descendants of the Theropoda group of dinosaurs. If true, then ironically, birds evolved from the Saurischia (lizard-hipped), not the Ornithischia (bird-hipped) division of dinosaurs.