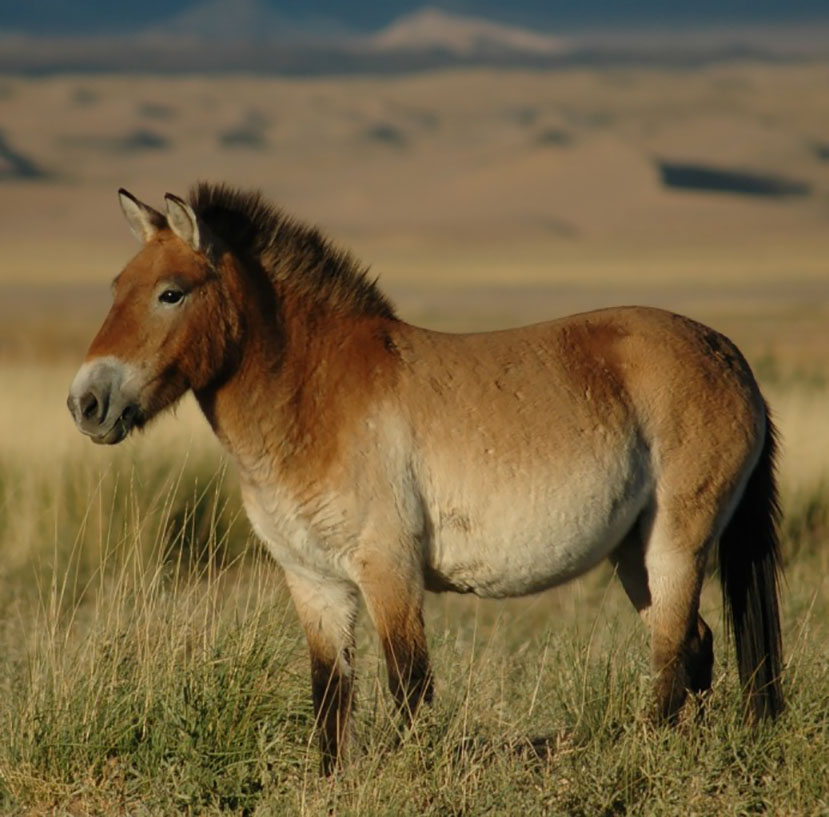 Przewalski's horse -- pronounced "sheh-val-skee's," according to the Smithsonian National Zoo -- is the last of the world's truly wild horses, a designation it earned by always resisting any attempt at training. As a matter of note, the famous mustang that ranged in great free-running herds across the plains of Texas was not a truly wild horse. It descended from domesticated Andalusian horses imported by the Spanish, and it would submit to training.

Przewalski's horse -- named for the 19th century Russian explorer, Colonel Nikolai Przewalski -- has a compact body and relatively short legs. Generally it is somewhat smaller than the mustang and roughly the same size as the plains zebra, the African wild ass or the domesticated burro.

During the last Ice Age, Przewalski's horse ranged over grassy plains that extended from Asia's eastern coast westward across Europe's Iberian Peninsula, at elevations as high as 8000 feet. Perhaps it is Przewalski's horse that is depicted in the images painted by Palaeolithic peoples tens of thousands of years ago on the walls of caves in France and Spain.

As the last Ice Age drew to a close, roughly ten thousand years ago, the horse lost much of its favored range as woodlands replaced grasslands. By the 19th century, the animal's total population had shrunk due to habitat loss as well as other factors, said the San Diego Zoo. Only a few herds remained, all in Mongolia, southern Russia and Poland. Late in the 20th century, those, too, had virtually disappeared. Przewalski's horse was last seen in the wild in 1969.

Fortunately, several of the animals had been captured and saved. Through the international cooperation of foundations and zoos, these horses were enlisted as seed stock for resurrecting the species. Today, the animal's population is roughly 2000, with about 1500 in zoos and breeding reserves around the world, and another 400 -- in reintroduced herds -- in wildlife reserves within its historic central Asian ranges.

Within its traditional range, said National Geographic, the horse preferred a steppe vegetation, shrubland and plains habitat, where it spent nearly half its time feeding primarily on the grasses. 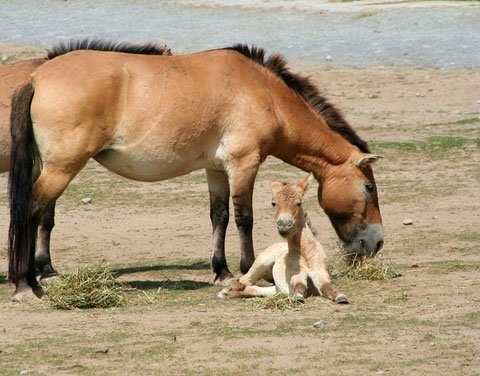 Because naturalists have had only limited opportunity to study Przewalski's horse in its native range, the animal's behavior in the wild is not fully known. Apparently, however, the naturally gregarious horse -- like feral domesticated horses -- forms "harem groups," which comprise a dominant stallion with his mares and young foals. At about two years of age, a young stallion leaves its harem group -- often driven out by the dominant stallion -- to join a different kind of group, a bachelor herd, with which it will remain associated until it forms its own harem group.

A dominant stallion asserts rigid control over his harem group, biting and kicking mares to keep them in line. He frequently rounds up his mares and the foals to keep them from straying. He sets the course when the herd moves, perhaps over several miles, to new feeding grounds or to water. He lines his charges out in single file to minimize the herd's exposure to danger. He brings up the rear so he can oversee and protect them. He drives off intruders and predators, raising and lowering his head, flattening his ears, and baring his teeth to signify his readiness to fight. He marks his claim to territory (which may encompass several square miles) and the possession of his harem with piles of dung seasoned with his urine.

Sniffing a mare's dung and urine, the stallion can assess her readiness to mate. (She reaches sexual maturity at about four years of age, he, at about five years.) When she turns her hind quarters toward him, he nuzzles her to gauge her willingness. Then he mounts her and they copulate.

Nearly a year later, the mare seeks out a quiet place within the herd's territory, and she delivers a foal that weighs some 60 to 70 pounds. She will return to the herd about nine days later. She will nurse her newborn for several months and may keep it nearby for the next two years.

By the end of the first day, her colt stands, finds its legs, and begins to forage. Within a week, it starts to graze and play. Within a month, it begins to interact and cavort with other foals. Within a couple of months, it reduces its nursing, increases its independence, and cultivates peer relationships. Within about five months, the young Przewalski's horse grazes and drinks like an adult. It may live for 20 years or more.