The raccoon – a masked, stealthy and cunning creature of the night – long ago established a firm hold on human imagination. 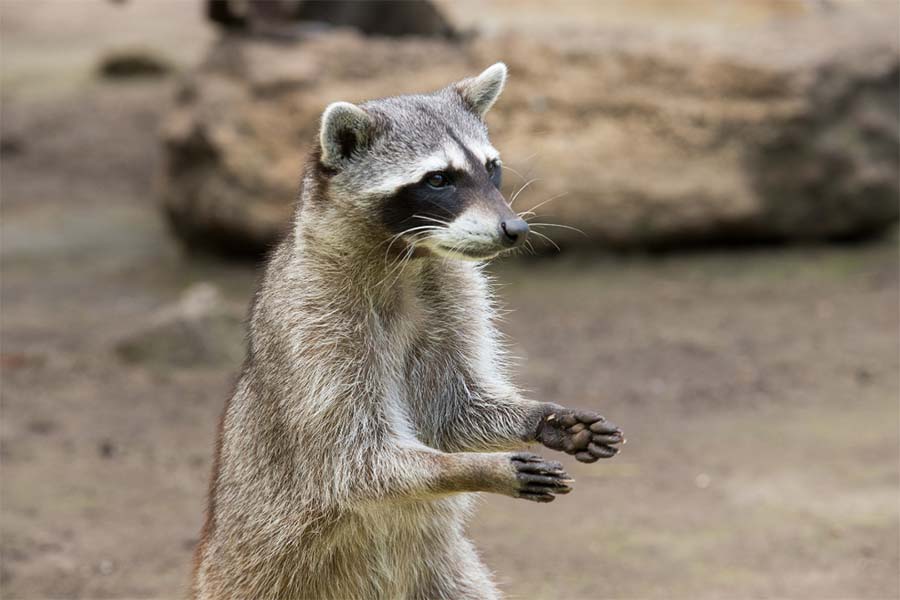 For some Native American peoples, the raccoon evoked associations with spirits of the sky, rivers and lakes and the mischievousness and foibles of the near-universal “Trickster” figure.

Description of the Raccoon

The typical two- to three-foot-long, 15- to 20-pound raccoon, distinguished by his bear-like shape, black and white color, masked face and bushy ringed tail, began its particular evolutionary journey about 37 million years ago, according to San Francisco State’s Kirsten Leising (see the university’s Department of Geography Internet site).  The raccoon shares the same ancestor that gave rise to the dog, weasel and bear.  Its evolutionary path appears to have been begun in Central America, radiating from there.

Today, the raccoon, which includes some 30 species and subspecies, including six in the desert Southwest, has emerged as one of the most adaptable and resourceful of all the mammals.  His coat, varying in coloration and thickness, helps him live, well camouflaged, in a wide range of environments and climates.  His dentition, with canines designed for tearing and with molars, for crushing, allows him to feed on a wide variety of both animal and plant organisms.  His forepaws, which resemble small human-like hands (although without an opposing thumb), give him extraordinary dexterity in accessing and manipulating food.  His shuffling gate, agility and strong swimming ability allow him to move comfortably over the ground or in trees and rough terrain or in streams and ponds.  His ringed tail serves him as a fat reserve when enduring hard winters, a balance when climbing trees and a brace when standing or sitting upward.  His acute hearing and night vision allow him to feed nocturnally, when he feels safer from predators.  His intuitive cleverness allows him to elude pursuers such as Mr. Harris’ dogs by doubling back on his trail to confuse directions and utilizing waterways or overhanging branches as detours to interrupt a scent.

Capitalizing on his evolutionary assets, the raccoon has colonized most of Central America, Mexico, the United States, southernmost Canada and even some Caribbean islands.  He occupies habitats ranging from forests to scrub woodlands to riverbanks to suburbs to even urban neighborhoods.  While he prefers trees for dens, he also takes up residence, quite happily, in large rodent burrows, caves, abandoned mines, rock crevices or deserted buildings, according to the Animal Diversity Web Internet site.  In the desert Southwest, he prefers densely forested riverine banks and the pinyon-juniper forested mountain foothills for habitat and den.  He may share, with fellow raccoons, a range spanning a mile or more, with even larger ranges in the Southwest.

Video from Trail Camera, he does not like his picture taken.

“In the wild,” says the Pelotes Island Nature Preserve Internet site, “a raccoon is omnivorous, eating plants and animals.  Its menu includes berries, acorns, grapes, and other plants, baby mice, baby birds and eggs, frogs, crayfish, fiddler crabs, fish, and even some snakes.  Around people the raccoon loves to eat the corn in the fields, garbage, and even animals that have been killed by cars.”  If close to water, the raccoon will “wash” its food, squeezing it with its front paws to make certain that it contains no obstructions to swallowing.  As I know from experience, a raccoon also thinks it funny to raid your campsite grub stash or your homesite trash can.  In the Southwest, the raccoon “will eat almost anything,” said James A. MacMahon in his book Deserts, one of the Audubon Society Nature Guides.

The raccoon gives up solitary life only during its reproduction season, from late winter through spring.  The lustful and promiscuous male may expand his range during his annual search for willing females.  After mating, the male goes on his lonesome way, leaving the female with the full responsibility for raising their young.

After a gestation period of about nine weeks, she bears a litter of three to seven blind and helpless kits, typically in a well-prepared den in a tree hollow, according to the Animal Diversity Web Internet site.  A nurturing and twittering parent, she tends her brood carefully, patiently enduring the litany of screeching, growling, wailing and purring that foretells the expansive vocabulary of coming raccoon adulthood.  As the kits mature, opening their eyes about three weeks and finding their legs four to six weeks after their birth, the female nurses them through about 10 weeks.    She teaches them to forage in the night during the following weeks.  She keeps close watch over them until the following spring, when they begin their independent lives.  Finally, she returns to her solitary ways.


A newly minted – and largely inexperienced – raccoon faces a host of dangers when he ventures out on his own for the first time, when he may fall prey to the larger predators such as a bobcat, coyote, fox or large raptor.  The surviving raccoon may set up housekeeping near the mother’s den or miles away.  The male will reach sexual maturity within a couple of years, the female, within a year.  Typically, a raccoon will live for only a few years before falling to predation, disease or humans’ traps or rifles or automobiles, but some manage to live in the wild for 10 to 12 years.

The raccoon has used its adaptability to help assure its future in spite of the threats.  He has, in fact, expanded in numbers and range over time.  “It seems to thrive best in the region where it can freeload to some degree on human garbage and crops,” according to the University of Texas at El Paso Centennial Museum Internet site.  In fact, it may have expanded its range across the Southwest “when humans opened up a ‘garbage’ niche.”