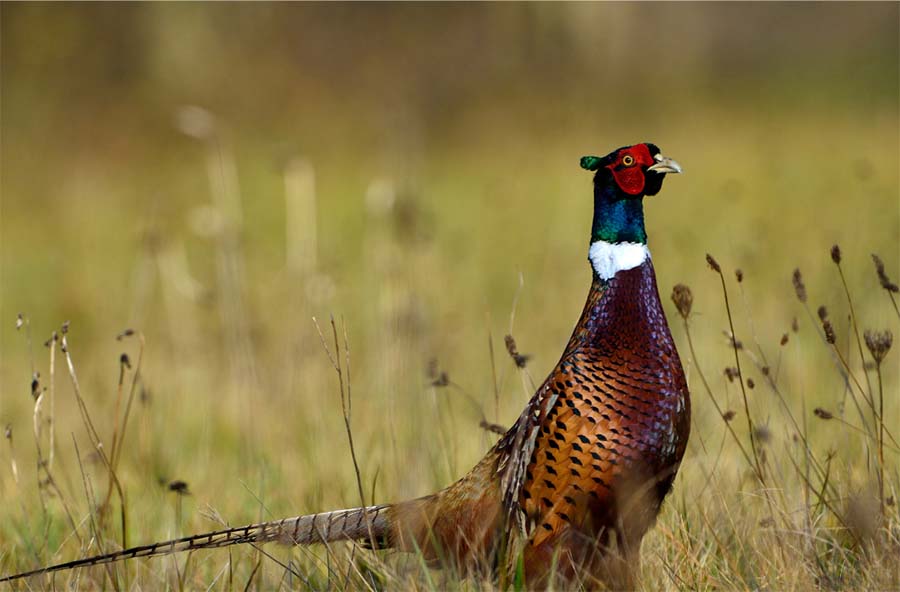 The genus name Phasianus (fay-sih-AY-nus) is from the Greek word "phasianos" meaning "of the Phasis River," which is located in the country along the east coast of the Black Sea. The river is now called the Rion. The species name colchicus (COL-kih-kus) is Latin for Colchis, an area in Greek mythology which was a province and city at the eastern end of the Black Sea and the Phasis River. It was from this region that the Greek Argonauts were said to have brought home the original pheasant stock to their own country. The name, "ring-necked," comes from the white ring or collar that surrounds the neck of the male. These birds are also called Chinese pheasants.

The ring-necked pheasant was native to Asia. It ranged from between the Black and Caspian seas east to Manchuria southeast to Siberia and Korea and south to China, Japan and Formosa. Pheasants were introduced in 1857 to California and to other western states in the 1880’s. The bird has naturalized from southern Canada and across the northern United States from New England to Oregon throughout portions of the southwest to northern Arizona and into northern edge of Delaware. Local introductions in some states have provided populations which are disconnected from those in other states.

Males are thirty to thirty six inches long (this includes a long tail that may reach twenty one inches in length), with an average wingspan of thirty two inches. The head and neck are strikingly iridescent green-blue or purple with a white collar that separates the head and neck region from the rest of the body. On the face there is a bright patch of red skin on the cheeks and around the eyes, forming red wattles below the eyes. Iridescent greenish ear tufts grow on the sides of the head. The overall body color is an iridescent bronze, mottled with brown, black, white and green markings. The long reddish brown tail has dark barring across the feathers. The male has a short spur on the rear of the foot. The female or hen, is, overall, a mottled brown, lacking the bright colors of the male. Her average length is twenty one to twenty four inches with an eleven- to twelve-inch yellow brown tail.

The ring-necked pheasant, which became the state bird of South Dakota, is commonly found in agricultural farmlands with crops of corn, wheat, oats, barley or hay, or areas with grasslands mixed with small woodlands. The bird also inhabits wetlands with suitable dry microsites.

Pheasants feed about an hour after sunrise. They consume mostly plant foods such as waste grains or seeds, corn, wheat, oats and barley, weed seeds and wild berries; but they will also eat large insects like grasshoppers, crickets, and caterpillars of gypsy and browntail moths. They will even eat mice or snails.

Courtship may start in February or March and last until August. Males call loudly, like a domestic rooster, to attract mates and define territories. Males strut before females with their ear tuft feathers raised and their red facial skin around the eyes engorged and prominent. Males defend territories (which average a few acres in size) from intruders, at times ending up in heated battles. The successful male is often polygynous. He may mate with several hens, which select their nest sites within the male's crowing area.

Dark green-buff or rich brown-olive eggs are laid in large clusters from April to August, one brood per hen per season. From as few as five to as many as twenty three eggs have been reported in nest sites, with the average number equaling about a dozen. At times, two hens may lay their eggs in one nest. Hens may also lay eggs in nests of other ground nesting birds such as mallards, blue-winged teal, gray partridge, bobwhite, turkey, ruffed and blue grouse. Incubation, usually by the female, lasts twenty three to twenty five days. The hen cares for the young until they reach thirty five to forty two days old. The male may protect the hen and her brood from intruders. Young are precocial, which means that they can move about on their own within a few days after hatching. Females may use the "crippled bird act" to lure predators away from their chicks or nests.

When flushed, pheasants may rise vertically or diagonally to avoid collisions. Males produce a loud metallic whirring sound from their wings as they fly, although they may fly silently. Flight patterns may contain rapid wingbeats punctuate with gliding. Both sexes may also run along the ground with the tail held at a forty five degree angle to reduce wear on the tail feather tips.

Male's territorial call is a loud KOCK-cack or cuck-et, cuck-et, followed by a loud clapping of the wings. Both sexes give loud, croaking alarm notes or clucking sounds like barnyard chickens.

The pheasant’s lifespan in the wild is relatively short. Many young hatched in the spring do not live past October. In general, males live about ten months. Females live an average of about twenty months. The maximum age in the wild is eight years. First introduced for hunting, the flashy ring-neck is one of the most widely distributed and popular game bird amongst sportsmen.

In one study in 1937, two males and six female pheasants were released on a four hundred and fifty-acre island off of the coast of Washington State. With few predators and an abundance of food resources, the population reached nearly two thousand birds within six years.