Each morning I take my dogs on a walk around our ranch in the northern Poway area, in Southern California. We walk through an area of woods and brush on our well-traveled trail. My dogs are large, weighing over 110 lbs and they love to chase the coyotes off our property, acting in their role as protector of the chickens and horses. Last week we came upon two coyotes as they were cutting through our horse pasture on their way to the brush covered hillsides. They were traveling back to their den to get their well-earned rest after a night of hunting and howling.

The coyotes spotted my dogs coming and quickly departed the trail.

My dogs charged after them, and were quite disappointed when the coyotes got away. Only a few dogs are able to catch coyotes because of the coyotes' speed and their ability to adapt to their surroundings. When on public property or in parks you should never let your animals harass the wildlife.

The animal that used to keep the coyotes under control was the wolf.  As I walked with my dogs, I thought it would it be great if there was a wolf residing in these hills to keep these coyotes under control. Wolves are wild carnivores, members of the dog family (Canidae). They are believed to be ancestors of the domestic dog, which evolved separately more than 20,000 years ago. Lack of wolves is one of the reasons why the coyote population has been expanding rapidly over the last 50 years. This is bad news for the domestic cat, one of the coyote’s favorite meals.

I had never seen a wolf up close, so I decided to visit some who are kept in a wolf preserve, the California Wolf Center, near Julian, California. Julian is a small mountain community in Southern California located at the intersection of California highways 78 and 79, about 50 miles northeast of San Diego. This historic gold-mining town is nestled among oak and pine forests between the north end of the Cuyamaca Range and the south slope of Volcan Mountain. The entire township of Julian is a Designated Historical District.

I made a reservation to go to the Wolf Center on the following Wednesday. When we arrived at the gate, we were welcomed by the manager who guided us up a rough dirt road. The road is best traveled in an SUV or truck. In wet weather, the road to the Center may be difficult or impossible to negotiate without a 4-wheel drive vehicle. The wolf preserve has had to cancel programs when the road has been impassable. We had no trouble with the road but you should know what to expect.

Skulls of the gray wolf, Mexican wolf, coyote and fox - all members of the dog family (Canidae).

The preserve is for the gray wolf, which is found primarily in Canada and Alaska, with much smaller numbers in Minnesota. The preserve also has some of the sub-species Mexican wolf, who once existed in higher elevations of the Sonoran and Chihuahuan deserts of Mexico but are now extinct in their native habitat. The gray wolf has a tendency to look lean and rangy like a coyote, but it's larger and carries its tail high rather than low. Due to the similarity, many people think they have seen a wolf, when they have really seen a coyote.

Wolf sizes vary with geographic locality. Adult males range from about 5 to 6.5 feet, from their nose to tip of their tail. They stand from 36 to 40 inches high at the shoulders and weigh from 100 to 175 pounds. Females are slightly smaller than males, and Mexican wolves tend to be smaller than their northern cousins. Coat colors vary from white to grizzled gray to brown or black.

A large gray wolf watched us as we approached the pack.

Wolves usually travel in packs and establish territories ranging from 30 to more than 500 square miles. They define their ranges with scent markings and vocalizations such as growls, barks and their legendary howl. Once a wolf leaves a pack and is away for a while, it cannot return.

The Mexican wolf is the rarest sub-species of the gray wolf in North America. It is also one of the smallest, reaching an overall length no greater than 4.5 feet and a height maximum of about 32 inches.

Until recent times, the Mexican wolf ranged the Sonoran and Chihuahuan deserts from central Mexico to western Texas, southern New Mexico and central Arizona. By the turn of the century, reduction of natural prey like deer and elk caused many wolves to begin attacking domestic livestock, which led to intensive efforts by government agencies and individuals to eradicate them.

Note the size of the feet. The wolf is concerned because I moved closer.

The California Wolf Center’s mission is to increase awareness and conservation efforts, promoting the protection and understanding of the importance of all wildlife and wild lands. They hope to achieve this by focusing on the history, biology and ecology of the North American gray wolf. The Center educates the public, exhibits wolves, promotes the reproduction of endangered wolf species, and studies captive wolf behavior.

At present the Center is home to several captive packs of North American gray wolves, including a pack of Alaskan gray wolves. These wolves serve as ambassadors and are our window to understanding wolves in the wild. The opportunity to visit the Center and see live wolves forms a bridge of understanding, thus heightening a person’s interest in conserving wolves in the wild. They try to provide the best, most natural environment for all wolves living at the California Wolf Center.

This wolf is keeping his eyes on us, but doesn't seem worried.

The center has a nice program to introduce you to the wolf. There is an interesting display of wolf skulls, as well as casts of wolf footprints, and one of a coyote’s footprint. There is a large difference between the two. Large wolves have a biting pressure of over 1000 lbs. The average large dog’s biting pressure is about 700 lbs.

At the 1.5 acre wolf enclosure, I was very impressed with the size of the first wolf that I saw, standing between two trees. What a beautiful animal he was, and much larger than I expected. We moved to an area by the fence where we watched the wolves as they looked us over. Wolves have a natural fear of people and the Center likes to keep it that way, so if they ever go back to a wild location they will stay away from populated areas.

The wolf moved up to the fence to watch us leave his area.

Though the keepers enter the wolf enclosures to clean up and to feed the wolves, they avoid contact with them. Wolves that have been socialized to humankind are more dangerous than wolves in the wild. There are no documented cases of wolves attacking people in the wild, however there are a few cases of attacks by wolves who have lost their fear of people. Wolves will kill dogs who enter their territory, but they will not eat them. You are not allowed to bring dogs to the preserve.

In April the female wolf gave birth to five pups. They are now becoming part of the pack. One of the six month old pups was quite interested in us and let me get about 15 feet from him. There was a fence between us, I guess for his protection.

Look at his eyes, they are always on alert.

Getting good pictures of the wolves is not easy, as you have take the pictures through a chain link fence.  You are not allowed to touch the fence, so it gets tricky. Pictures are best taken with a digital camera with a telephoto lens. The trick is to be able to get the lens to focus on the wolf rather than the fence.  If done correctly, the fence will not show up at all or it will be almost invisible to the digital chip in the camera.  This should also work with film, however the digital camera produces an immediate result that can be checked. With any luck about 20% of your pictures will be good ones. All the wolf pictures in this article were taken through the fence.

We hated to leave, but our time was up and we had to get back to work. After a quick lunch in Julian, with one of their famous apple pies for dessert, we were back on the road. Back to see our dogs and the coyotes. We left the wolves at the preserve.

The California Wolf Center is located about four miles south of Julian on Hwy 79 off of KQ Ranch Road. Private Tours are available Monday - Friday by appointment. The tour lasts one hour and includes a visit with two Ambassador wolf packs. Call 760 765-0030 for details. 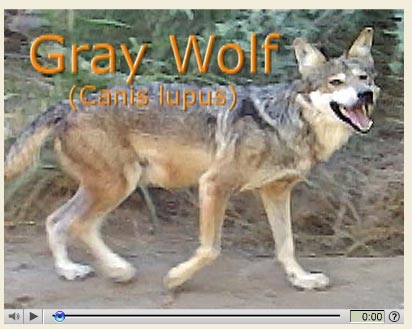