The Verde River Canyon is a living, natural jewel at the edge of the Mogollon Rim in Central Arizona. The real beauty of the canyon, its resistance to change, is best experienced while traveling the Verde Canyon Railroad at a gentle speed of about 12 miles per hour.

Passengers aboard the Verde Canyon Railroad can enjoy breathtaking views of an unspoiled, riparian wilderness, displaying wildlife, waterfowl, unique rock formations and Sinagua Indian ruins. During the 40-mile round trip, which usually takes 3 1/2 to 4 hours, the train passes through a 680-foot man-made tunnel and over a covered railroad trestle, as well as several other trestles bridging canyons of the Verde River. The most notable of these is called SOB Canyon -- a 175-foot-deep gorge named after an obscure soul known as "Sweet Ol' Bill." This part of the canyon offers a beautiful panorama of the Verde River that is as magnificent as any place in Arizona. Watching light play on the waters of the Verde River is a great pastime while swaying through the rust-crimson colored sandstone cliffs and craggy, black basalt (a reminder of Arizona's violent volcanic past) that comprise the walls of the canyon. Statuesque sycamores and cottonwoods with canopies spreading 25 feet -- hundreds of years old -- line the river like sentries ready and willing to protect this riparian wilderness from ecological disaster. Mesquite, ocotillo, prickly pear, spanish dagger and strawberry hedgehog cactus line the tracks from beginning to end.

The friendly employees at the depot and the hostesses on the train make the Verde Canyon Railroad experience a pleasant one. Passengers have the opportunity to learn about the seasons, history, archaeology, geology, and lore of the Verde Valley and North Verde Canyon from expert narrators onboard the train. Food ranges from individually packaged, complimentary appetizers in the passenger cars to freshly pepared appetizers if you book the exclusive caboose. Champagne (or sparkling cider) toasts on board are provided and premium alcoholic beverages are available for purchase. Open-air gondolas with unobstructed viewing are a nice option though the passenger cars all have panoramic windows. 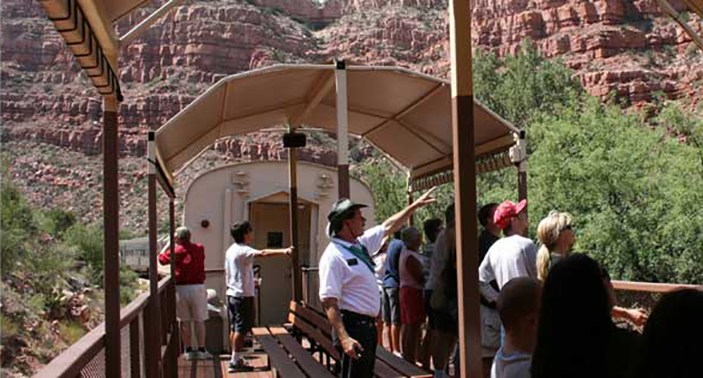 The train departs from Verde Canyon Railroad's depot in Clarkdale year-round, but the schedule varies according to seasons. As it leaves the depot, you can see behind you the old mining town of Jerome, about halfway up the side of the mountain. Copper ore from the Jerome mines was brought down to the Clarkdale smelter, northwest of the depot. The smelter originally covered almost 200 acres with more than 30 buildings on the site. The smelter operated between 1914 and 1953, when both the Jerome mines and the smelter in Clarkdale were closed permanently. The railroad, built in 1911 and 1912, hauled the smelted copper to the Santa Fe main line, from where it was shipped to destinations throughout the US. The Verde Canyon Railroad now mines for something more valuable -- tourists -- accommodating 65,000 passengers annually. Whether it's a smooth glide through a cool summer night's breeze or a brisk foray to gaze at the changing leaves of autumn, the Verde Canyon Railroad offers a spellbinding experience regardless of the season.

Winter
From December to April, the Eagle Watch is on in the Verde Canyon. One of the few remaining areas where nesting bald eagles can be seen in their natural habitat, the Verde Canyon offers visitors the chance to catch a glimpse of these remarkable birds of prey. Other elusive raptors return to the canyon each winter and can be spotted easily from the open-air viewing cars. A lively riparian habitat is clearly the invitation that stimulates the migration of many great birds of prey to the Verde Canyon. One study revealed that from 50 to 75 bald eagles winter in the canyon. 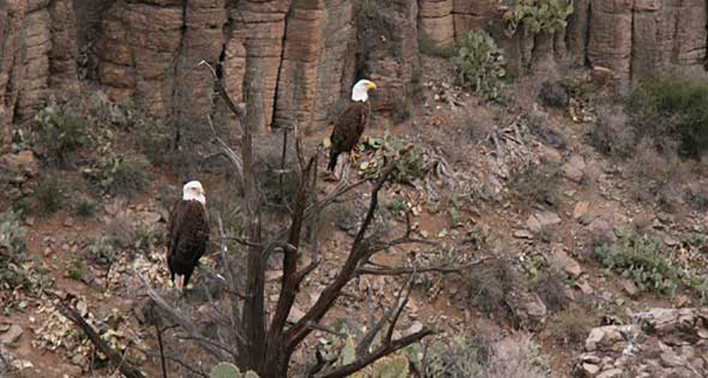 Spring
A patchwork quilt of color blankets the canyon floor as wildflowers and cactus bloom from March through June. Desert narigolds, blackfoot daisies, larkspur and other wildflowers dot the landscape while the bright blossoms of the prickly pear and ocotillo add another dash of color. Seeing wildlife and waterfowl in their natural habitat only adds to the floral masterpiece created by Mother Nature.

Summer
While the daytime temperatures climb, there is no more relaxing ride than a Starlight Tour through the Verde Canyon. The sun strikes through the clouds, following a warm desert thunderstorm, turning water droplets into diamonds, glistening on riverside cottonwood, sycamore, and ash trees in full bloom along the tracks. The canyon makes a remarkable transition from daylight to dusk as train passengers marvel at how the colorful chasm changes with diminishing daylight. As the train reaches its turnaround point at historic Perkinsville, the western sky burns with the flamboyant color of an Arizona sunset. On the return trip to Clarkdale, stars shine so brightly they seem to be within easy reach, and the nocturnal wildlife that resides in the canyon can be heard, even above the "clicketyclack" of the train on the track.

Autumn
As the mercury begins its yearly dip, the gold, bronze and copper leaves of the Verde Canyon's willows, cottonwoods and sycamores dominate the visual landscape. In the fall, the succulent prickly pear cactus explodes with crimson-red fruit. The native Indians and modern man alike use this red fruit to make a tasty jelly. It is a season when the wildlife, including deer, javelina, and antelope become more active and more visible. The yearly migration of hundreds of species of birds, including the elusive dipper, rare western and mountain bluebirds, northern harriers, lesser night hawks, and great white egrets arrive for the mild winter ahead.

Additional Information
The Copper Spike Cafe, conveniently open before the train ride, specializes in a "build-your-own-lunch" menu with a southwestern flair. Boxcar Gifts, located in the depot lobby, is an atypical souvenir store.

Keeping with the grand tradition of the small town train depot, the Verde Canyon Railroad depot, which first opened its doors on July 4, 1997, is also available to host parties, meetings, weddings and other events.

Educational tours are also offered in conjunction with organized tours, reminding visitors that getting ready to ride the rails is part of the Verde Canyon Railroad journey.

Excursion trains depart from Verde Canyon Railroad's new depot in Clarkdale year-round, however, the schedule changes according to seasons. Prices include applicable sales tax, and refunds will only be made if reservations are canceled at least 48 hours prior to departure.

Boarding is at 300 North Broadway, Clarkdale, which is two hours north of Phoenix, one hour southwest of Flagstaff and 25 minutes west of Sedona.

Food and beverage service is provided at the depot; snacks and beverages are available on the train. No coolers or hard-pack containers, strollers or large carry-ons are allowed. The train and the depot are non-smoking facilities.

There are hotels and motels in Prescott, Cottonwood and Sedona with something for every taste and price range.

Text by Howard A. Sheldon
Photos by Verde Canyon Railroad