Desert Hot Springs is a city of about 28,000 people located in the Coachella Valley in Riverside County, California. The city’s location is unique; it sits atop two aquifers, one hot and one cold. Its many spas have led to its nickname, “Spa City”.

The Cahuilla Indians knew of and used the hot springs in the Coachella Valley for many hundreds of years, possibly more than one thousand, calling the area Sec-he (boiling water). The springs were an integral part of their culture, forming a link to nukatem, sacred spirit creatures, and to their creation myths. The name Agua Caliente (hot water) was coined by Mexican Don José Romero much later in the 1820s as he passed through attempting to find a route from Tuscon to Monterey. While his goal was not met, Romero’s name for the region endured.

Fast forward to the Homestead Act of 1862, enacted by President Lincoln, and new areas in the West opened to settlers. Settlers began to arrive in Desert Hot Springs in the early 1900s. Those first adventurers were a hardy lot, traveling every day to get water to survive, sometimes many miles just to fill a canteen from muddy water holes. There were two locations in the region where water seeped from the ground:  Two Bunch and Seven Palms. Cabot Yerxa described getting water at Two Bunch this way:

The source of the water was tiny driblets of water oozing out of a five-foot clay bank. A dilapidated, rickety ladder stood there, and by going down a half-dozen rungs it was possible to fill a canteen where the slightly moving water kept the scum from forming too thickly. It was here we obtained our water.

Cabot Yerxa is credited with the modern discovery of “Miracle Hill”, though the Indians knew of the springs’ locations from tales passed down from generation to generation. Yerxa chose the hill for his homestead when he found remnants of Indian pottery there. Later, guided by an Indian who had joined his campfire one night, he found his first well location on the site. He chose to dig on the top of the hill, so that the well would be just outside his planned front door. That well opened up to a 168-degree hot mineral water aquifer. On the other side of the hill, Yerxa discovered a cold-water aquifer. 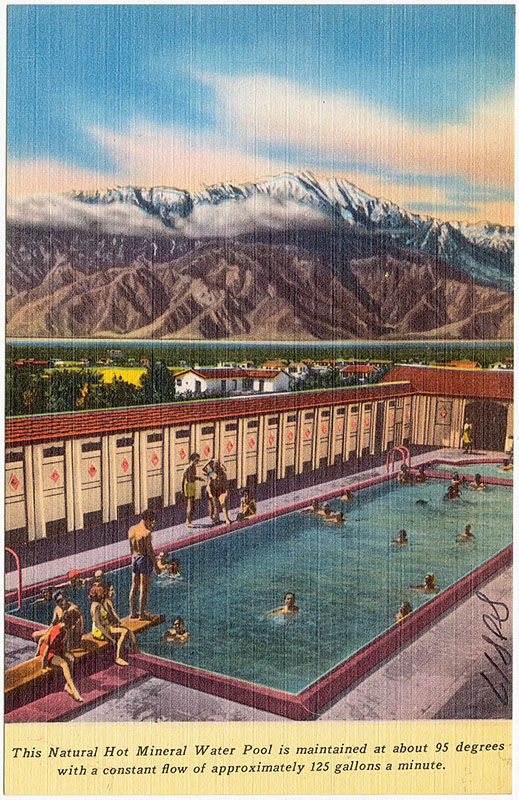 Postcard from the 1950s: This Natural Hot Mineral Water Pool is maintained at about 95 degrees with a constant flow of approximately 125 gallons a minute.
By Tichnor Brothers, Publisher - Boston Public Library Tichnor Brothers collection #80817, Public Domain

In fact, the Mission Creek branch of the San Andreas fault divides two aquifers right there on Cabot’s hill, one hot and one cold. The cold water has won awards for best water in the International Water Tasting Competition at Berkeley Springs, WVA, while the hot mineral water has a reputation for profound healing of the body and the soul.

Cabot and fellow homesteader Bob Carr dreamt of a hot springs spa city, and in 1932 L.W. Coffee visited from Los Angeles, met with Yerxa, and began to make that dream real. Desert Hot Springs was born. The first hot mineral bathhouse, Coffee’s Bathhouse, was built in 1941. It was a wooden structure with large pools and changing rooms. There were no accommodations, and the two thousand people who came to the opening had to sleep in their cars or tents.

Today this is a city of hot springs spas; there are almost twenty in Desert Hot Springs. There is a spa for almost every taste and budget, and all offer massage specialties in addition to the benefits of soaks in the hot springs’ curative, uniquely odor free, mineral waters. Most are adults only – do an advance check as some are clothing optional.

Floating in these mineral water pools far surpasses an ordinary swim; you feel supported and cleansed in the slightly salty feeling, stimulating water that simultaneously buoys you up. Slowly you begin to melt down into an elemental state as the dramatic mountains frame the sun as it rises and sets, and the calm, starry nights bring healing. Desert Hot Springs is a balm to the soul, and as yet, an undiscovered gem. 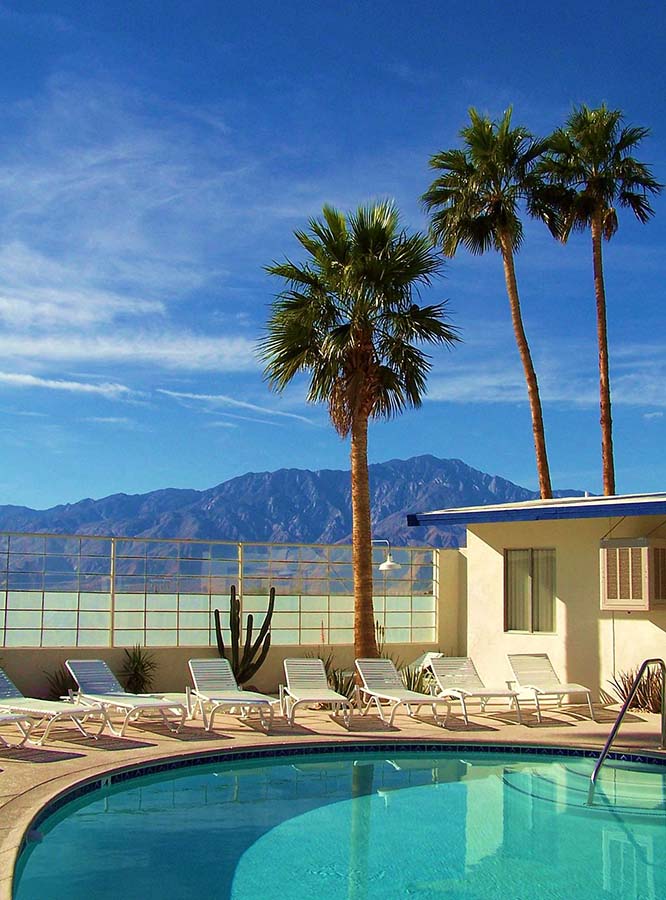 If you feel like taking a little exploratory trip before you melt completely away, Cabot’s Pueblo Museum is a great choice. Cabot Yerxa built his museum by hand from materials rescued from his first home and other early structures in the Desert Hot Springs area, adding his own adobe and handmade bricks. He started it in 1941 and always meant it to be a museum at some point. 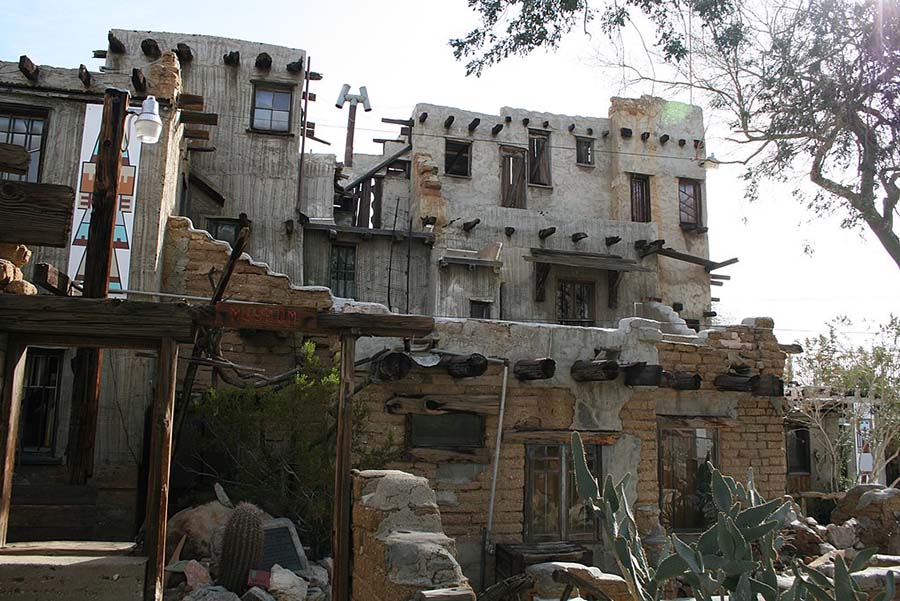 The very helpful docents are full of information about the area’s history and geology, Cabot Yerxa, and the Cahuilla Indians. The museum displays Native American art and artifacts as well as materials from Yerxa’s life. “The Pueblo has four stories, is 5,000 square feet and includes 35 rooms, 150 windows, 30 rooflines, and 65 doors,” says the museum’s website. Check the site for tour information: http://www.cabotsmuseum.org.