A coyote crosses a road near Furnace Creek. NPS Photo

The extremes of summer in Death Valley pose the ultimate test of survival for wildlife. Animals must have special adaptations of both their bodies and their habits to thrive in the severe climate. The kangaroo rat, sidewinder and pupfish are among the most successful, but each in their own unique way. 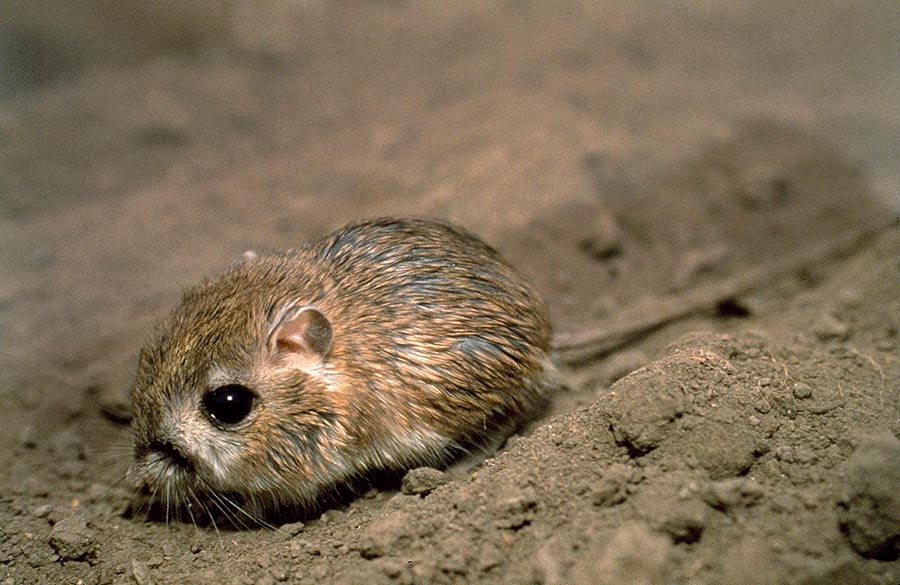 Kangaroo rats are consummately adapted to the dryness and heat of Death Valley's summer. In this place famous for its lack of water, kangaroo rats can live their entire lives without drinking a drop of liquid. All of the water they need to survive can be metabolized within their bodies from starch and fats in the dry seeds they eat. They are also masters at conserving moisture; their kidneys have the ability to concentrate urine 4 to 5 times that of humans.

Kangaroo rats avoid the intense heat of the day, as most desert animals do, by restricting their activity to the night. Days are spent deep underground in burrows that are both cooler and higher in humidity than outside. The water vapor contained in the humid air is reclaimed by special membranes in their nasal passages, and is also absorbed by the food stored within the den. They may even plug the burrow's entrance with dirt to keep out heat and intruders. 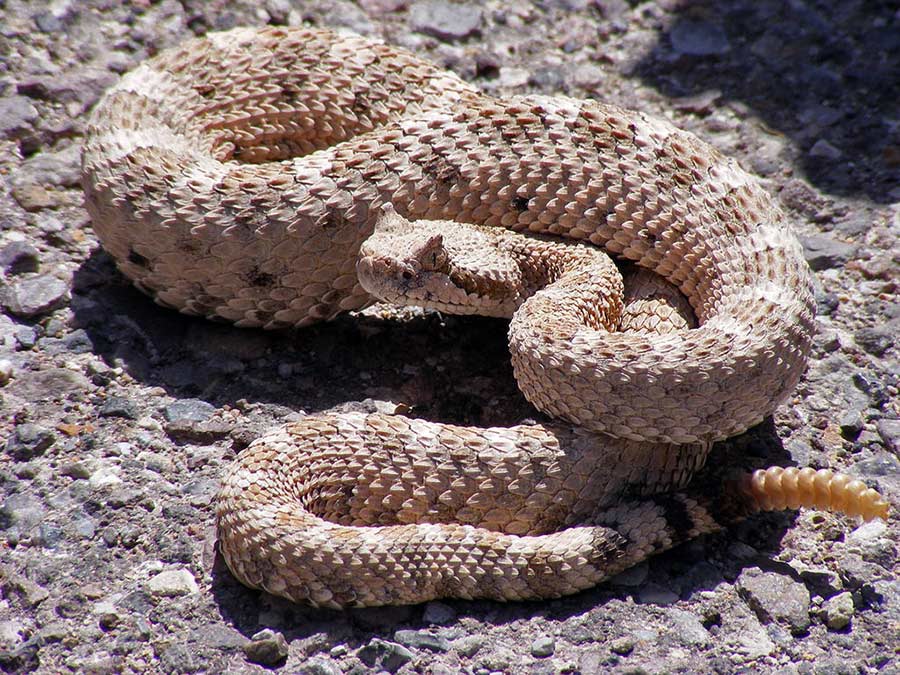 The sidewinder may be one intruder the kangaroo rat is trying to keep out of its den. This small rattlesnake is best known for its odd looping motion as it travels, but it, too, is well adapted to the extremes of Death Valley's climate. Like the kangaroo rat, the sidewinder does not need to drink water.

All the moisture it requires comes from the juicy animals it eats. The sidewinder is also nocturnal and spends the hot days in underground dens. Rather than digging its own burrow, it simply moves into one previously occupied by the unlucky rodent it ate for dinner. Like all reptiles, the sidewinder is cold-blooded (ectothermic). Warm-blooded (endothermlc) animals such as kangaroo rats and humans metabolize body heat from food, but ectothermic animals must absorb heat from their environment. Deserts have lots of heat, but little food, so ectothermic animals such as reptiles make excellent desert dwellers. 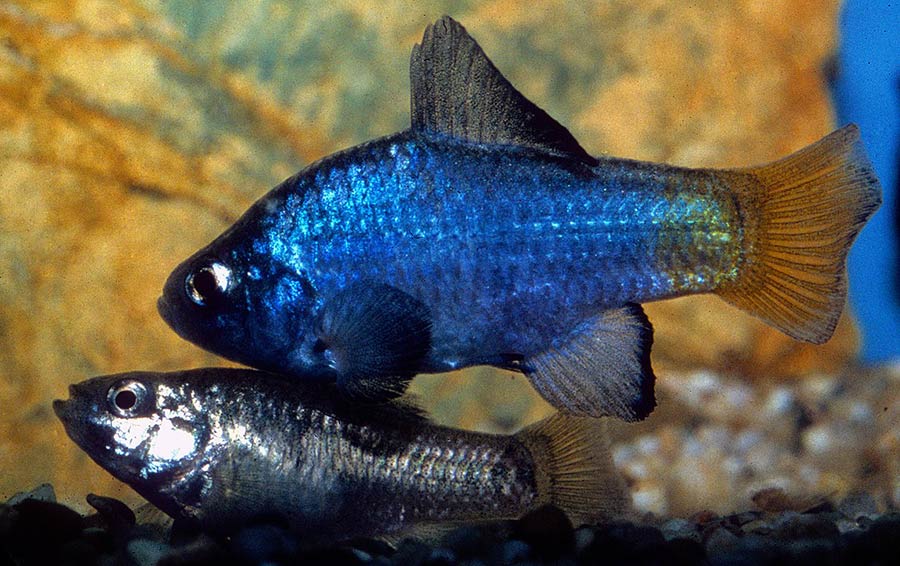 The tiny pupfish found in Salt Creek on Death Valley's arid floor are also ectothermic, yet they cannot escape the high temperatures of solar-heated pools. Pupfish are among the most heat tolerant of all fishes. They have been known to survive in water temperatures of 112 degrees F.

Some pupfish species in the Death Valley area actually live in hot springs. The pupfish of Salt Creek are so adapted to warm water, they must burrow into the mud and become dormant when the shallow stream becomes cold in the winter. Another obstacle these fish face is high salinity. Pupfish can survive in water 2 to 3 times saltier than sea water. When Salt Creek evaporates in the summer, the dissolved salts become even more concentrated. Fish living in fresh water can absorb water through their body by osmosis, but pupfish and other salt water fish must drink to get their necessary water. Excess salts are then excreted through their kidneys and gills. 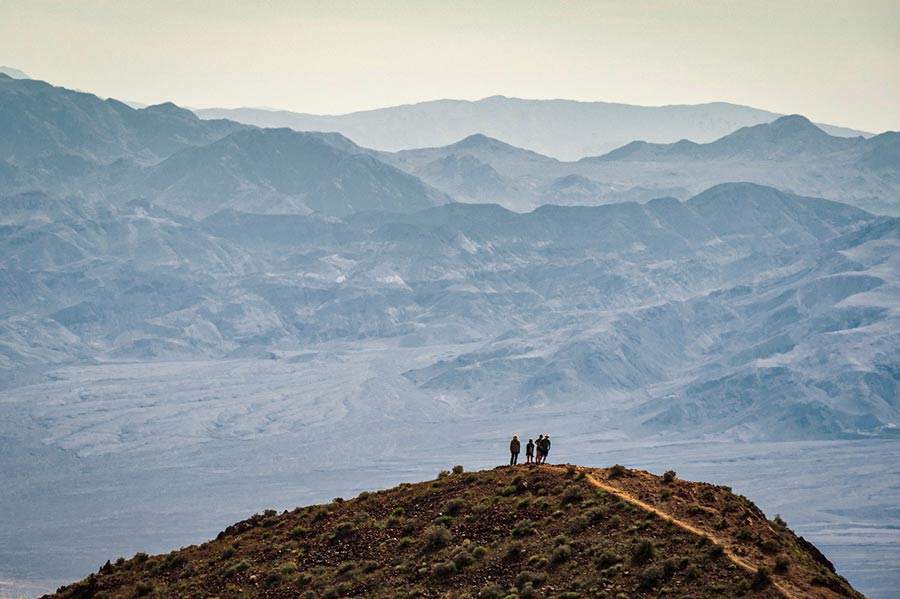 Human beings must also drink water, but our bodies can only process fresh water. People perspire, allowing the evaporating water to pull the heat away from our bodies, but then we must replace the lost water. Our activity can also be timed to avoid the hottest part of the day. We may share some habits with desert wildlife to beat the heat and dryness, but our real success comes from our ability to change our surroundings to meet our needs.

Timbisha Shoshone, the Native American people who have lived in Death Valley for centuries, did the most logical thing when summer arrived -- they left for higher and cooler country. In the early history of the valley, almost everyone else followed their example. Only a few hardy souls stayed behind to face the intense heat of summer. Miners working the Keane Wonder Mine in 1908 complained that even eating became difficult; the silverware was too hot to handle. Original caretakers of the Greenland Ranch at Furnace Creek slept in the irrigation ditches and devised a water-wheel powered fan to cool themselves. Today, with electric air conditioners and evaporative coolers, we human beings can find shelter from Death Valley's heat.

Technology has brought an influx of summer visitors never before known to this area. If you visit, keep in mind that only an artificial shelter allows you to be here in relative comfort. You are not as physically adapted to survive in Death Valley's summer as its wildlife residents.