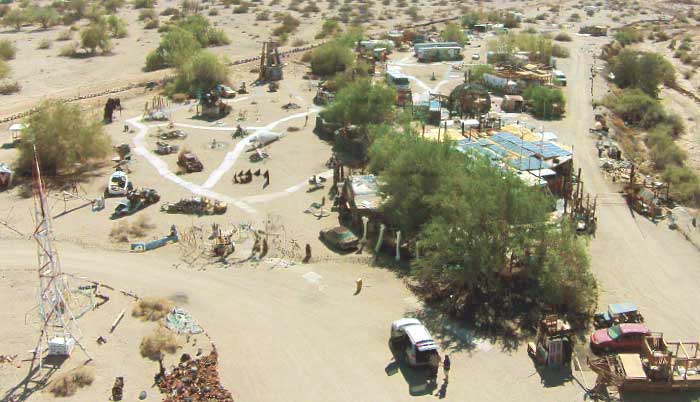 Slab City, California, “The Last Free Place” – In early 2007, Charlie Russell left his tech job, packed all his belongings into a shipping container, and headed out into the desert to a place known as Slab City. Originally intending to work on Salvation Mountain, he began to surround the two art cars he had built for Burning Man with sculptures. These would become the foundational works of East Jesus. Russell constructed a labyrinthine central complex that now houses administrative, operational, and hospitality facilities, as well as a performance space with a studio grand piano, a PA, and a stage lighting system. The compound is powered by solar panels whose resultant energy is stored in batteries; they have cell service and wifi, but no running water. Since Charlie’s passing in 2011, a board of directors has guided the curation and expansion of East Jesus, honoring his vision of a sustainable, habitable, ever-changing art installation.

We had been to the slabs many times but didn't learn of East Jesus until we started working on a project involving Salvation Mountain, and the art created by Christina Angelina on nearby water tanks. When we first visited the East Jesus Compound we didn't know what to expect. To our surprise it was a great place to visit.

From our research on the web, it appeared that East Jesus might just have a bunch of junk on display. When we entered the art garden though, we soon realized that a lot of thought and effort had gone into the creation of some very interesting pieces of art out there.

Here are some photos taken in the East Jesus Art Garden. 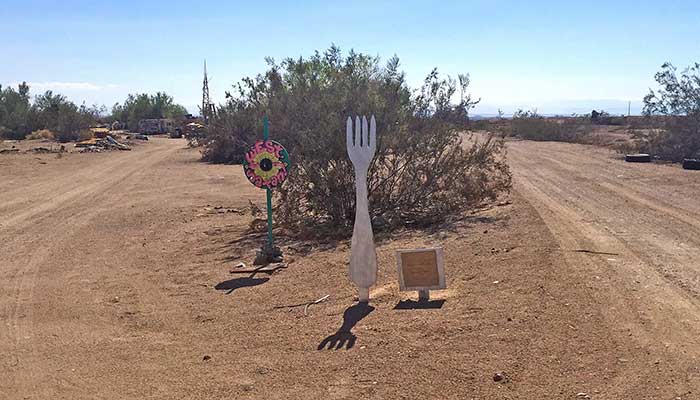 East Jesus entrance - Look for the fork in the road. 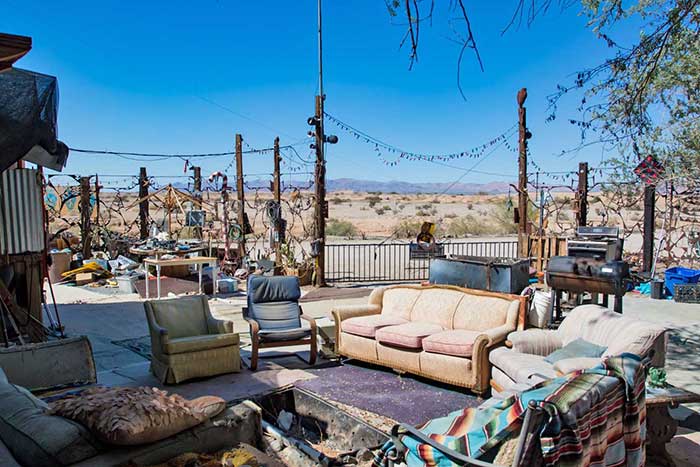 The patio has a good view of the Chocolate Mountains and the gunnery range
used by the Navy and Marines for aerial bombing and live fire aerial gunnery practice. 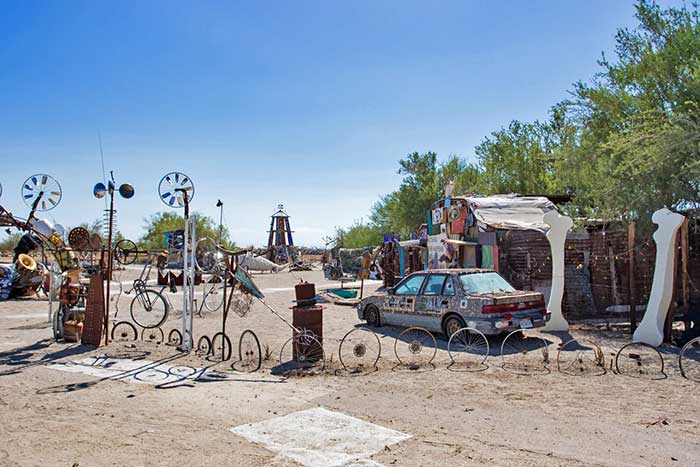 The archway that is the entry to the sculpture garden was built
collaboratively by Charlie Russell and Royce Carlson. 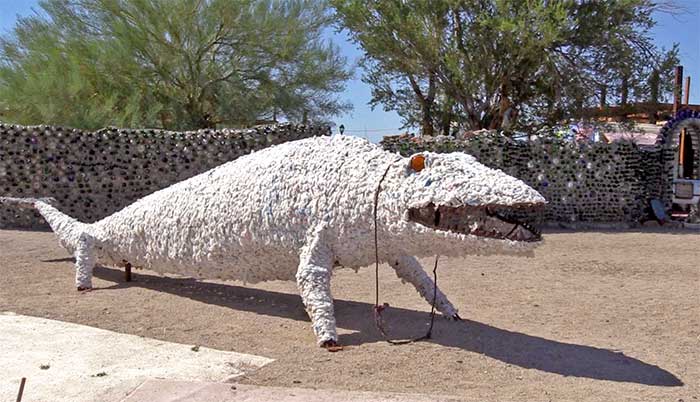 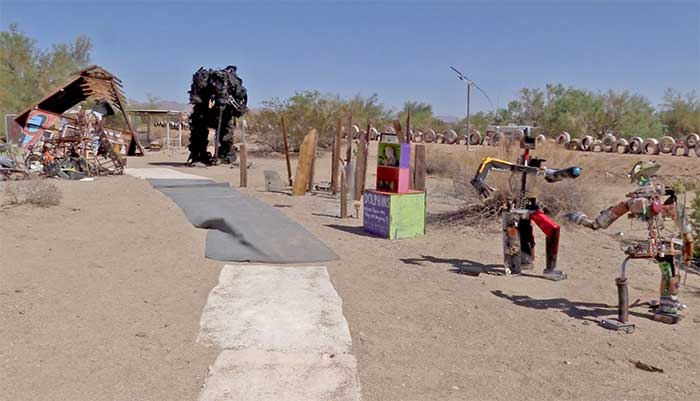 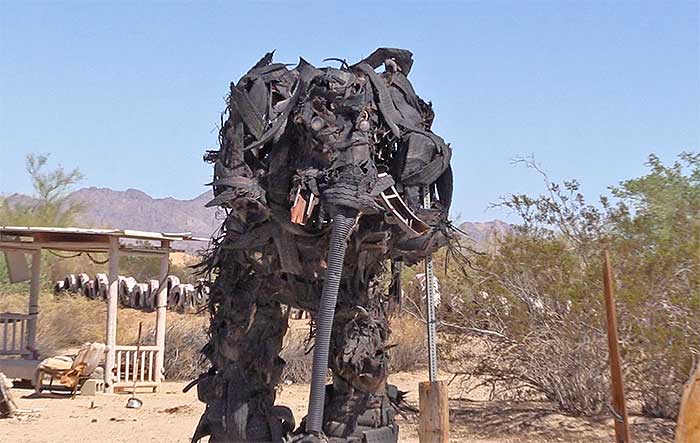 The Mammoth “Definition of a grievance” 2009
Blown out car tires, dimensions variable by Joe Holliday 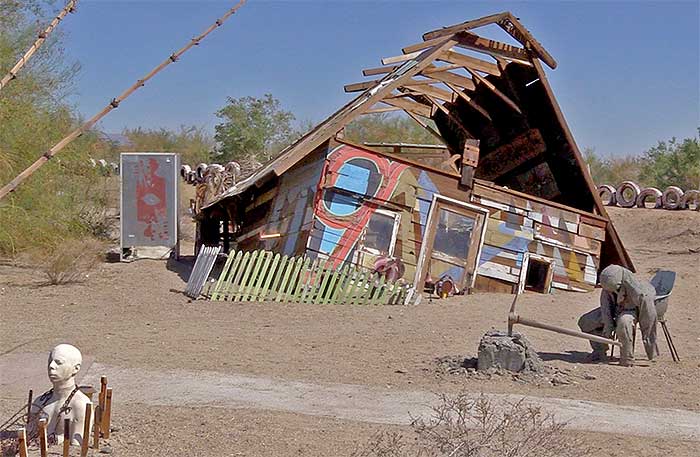 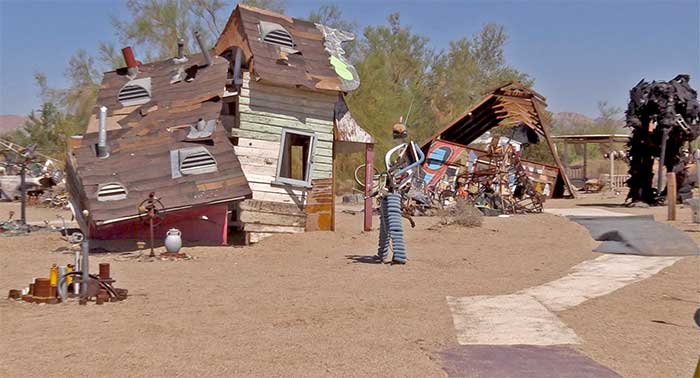 1971 Volkswagen / Westfalia Campmobile. 2001-2010 Completely decorated and illuminated inside and out, this mobile bar/altar/temple/office/home has traveled the US extensively and has been lived in off and on since its creation. 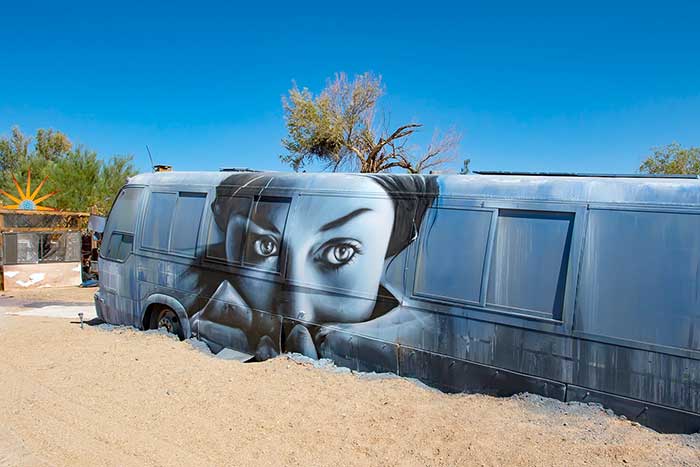 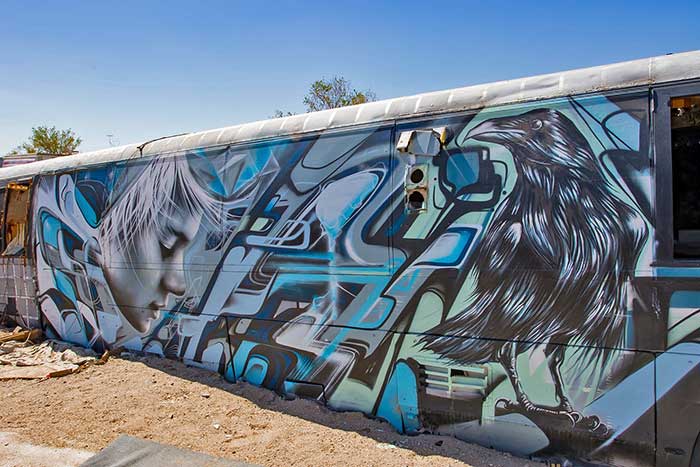 The other side of the bus "Walter" 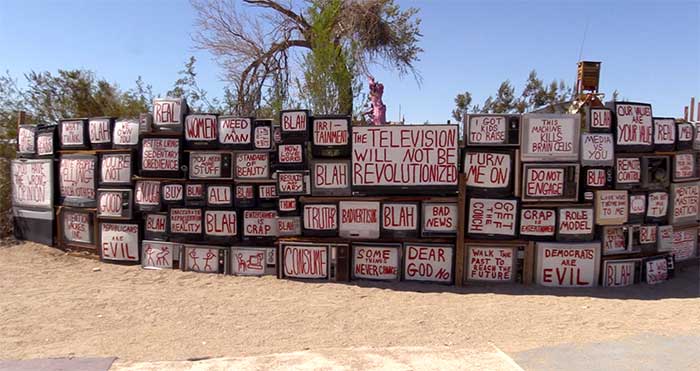 
TV's can be art also. On the edge of a world saturated by media, in a desert outpost where it hardly seems to touch, Flip Cassidy has constructed a veritable wall of cynical-tongue-in-cynical-cheek commentary on this looming, pervasive force in our lives. This sculpture is made entirely from found and collected TV sets and computer monitors (most of which have had their circuit boards harvested for different art projects), and lets this castrated pile of technology complain silently to the desert and its passersby about how our society has decided to use it. As long as there is room to add to the breadth and height of the wall, it will remain a work in progress.

Chair with a View

What is East Jesus? Their website says, "East Jesus is a place for those who continuously interact with and remake the world around them. It is the nexus of a sweeping wave of artists, musicians, photographers, inventors, travelers, and other assorted rebels and rogues and sworn brothers and sisters. It is a performance space for an aerialist troupe, a rest stop for a band on tour, the midnight testing ground of a sleep-deprived engineer, or the final resting place of a decaying art exhibit. It is a waypoint between cities, gigs, careers, love lives. It is the place a friend tries to tell you about after emerging wide-eyed from the desert one early morning — the place far from the skylines, past the mountain, beyond the edge of the pavement, up the dried river, surrounded by spent shells and shivering sand."

The inhabitants of East Jesus and its off-site members provide a refuge for artists, musicians, survivalists, writers, scientists, laymen and other wandering geniuses. The Chasterus Foundation, a 501(c)3 tax-exempt charity, seeks to maintain and expand the vision of the late Charles Stephen Russell in Slab City, California. The long term view is to try to purchase the land so that East Jesus can become a permanent home for the artists. This, of course, costs money; they have started a land purchase fund. To learn more about East Jesus's history see their website.

More on the area

Salvation Mountain, East Jesus and the Kinetoscope are all located in Slab City near Niland, CA, USA.