The Man Who Built Salvation Mountain

The mountain is called Salvation Mountain, and the man who built it is named Leonard Knight. It took 25 years of hard labor, endless buckets of adobe clay, 100,000+ gallons of paint, thousands of hay bales and one man with unwavering faith to build a mountain. This mountain has earned the recognition of The Discovery Channel, Ripley’s Believe It or Not and National Geographic. It is not an ordinary mountain and the man who built it was not an ordinary man.

Salvation Mountain is located in a remote area near Niland, CA, between the Salton Sea and the Chocolate Mountains, in a place called Slab City. Some might call Salvation Mountain a work of art, while others may call it a work of faith, but to Leonard it was his life’s work and purpose, built to spread the word of Jesus. And he did, by building a mountain that delivers those words through a colorful display of bible verses woven into ribbons of paint that form waterfalls, lakes and flowers. Salvation Mountain was a work in progress for many years. Built with adobe clay, hay bales and other scraps found in the desert, Leonard created a mountain to deliver his message, “God is Love.”

It took many years for Leonard to realize the purpose of his life, but once he discovered his faith, his quixotic journey began. New meaning in his life fueled visionary goals. Once Leonard locked onto a vision or idea, he did so with undying determination. He had a couple of false starts with his first vision, a hot air balloon bearing the words of Jesus. That effort ultimately failed. To Leonard however, it wasn’t a failure but part of a journey that lead him to his quixotic project “Salvation Mountain.”

Born on Nov. 1, 1931 in Vermont, Leonard Knight was the fourth of six children. He attended school until the 10th grade. In 1951 he joined the military and was trained as a vehicle mechanic. He served during the Korean War fixing jeeps and other equipment. After his time in the military he returned to Vermont to work as a car mechanic.

The author, standing on the yellow brick road.

Leonard says his life was changed forever in 1967 when he finally opened his heart and discovered the love of Jesus. He was visiting his sister in Lemon Grove, California when this transformation occurred. Leonard had never been a man of faith. His sister insisted that Leonard go to church with her one day, but he just ran away from her. Shortly thereafter he was sitting in his truck and began to think to himself “I am a sinner, Jesus come into my heart.” He kept repeating these words to himself and he underwent a sort of transformation.

With his newly discovered faith, Leonard returned to Vermont with a sense of love, vision and purpose. In 1971 his vision took shape when he came up with the idea of spreading the love of Jesus by building a hot air balloon. He thought putting Jesus’ message on a hot air balloon would be a great way to spread the word. For 10 years he kept his focus on building that balloon. He didn’t have any money or a plan, he just knew that he had to find a way somehow to do it.

The vision of building a hot air balloon became a long-term dream that didn’t transform into an actual project until 1980, 10 years later. Leonard was on his way home from visiting his sister in California when the starter broke on his truck in a town in Nebraska. Since Leonard had been a car mechanic and had little money, he found a junkyard that had a used starter and bought it. The man who ran the junkyard, Copy Jones, said he would help Leonard build the balloon. Copy contacted a local balloon manufacturer and was able to obtain balloon material scraps for Leonard’s project. Copy’s wife gave Leonard a sewing machine and he began to sew his hot air balloon. After a couple of years and many attempts to fill the balloon, he realized that the balloon was too big. It was about 200’ x 100’, too large to fill with hot air and launch. He didn’t stop trying though. Leonard’s tenacity, strong sense of purpose, and faith continued to drive him forward. He developed a special apparatus to create enough hot air to fill to the balloon. On his last attempt to launch the balloon, in Niland, CA, Leonard realized that the project had taken too long; his balloon material had rotted. All of his work was gone. He gave up, but only for a short period of time.

Leonard was no quitter and he told himself that. He felt he had to succeed in spreading the word of Jesus. Leonard came up with a new idea to build an eight foot balloon out of cement in Niland, CA near Slab City. He only intended to stay for a week to finish this new project, but he never left.

While the cement balloon was another failure, collapsing due to an excess of water in the cement mix, Leonard’s dream was not over. The balloon project had led him Niland, CA and to a better idea that would end up being his life’s work . . . to build a mountain. In 1984 Leonard began work on his new project and it became the pinnacle of his life’s purpose. He called it “Salvation Mountain.” The mountain was started with a bucket, some adobe clay and water. There was no running water or electricity where he planned to build his mountain. It must have been a lot of work to haul in all the water needed to mix with the clay. With devotion and determination, Leonard began to build his vision, a mountain that would enable him to spread the word of Jesus.

Some of Leonard's flowers, made of clay from the mountain

Twenty-five years later, Salvation Mountain can be seen from a distance, its colorful design standing out against the desolate desert that surrounds it, a beacon of hope and love where it is least expected. Visitors from around the world travel to Niland, CA to visit Salvation Mountain. They have perhaps come across it on the internet, heard about it from a friend, read about it, or seen it on television. Leonard’s dream of spreading the word of Jesus has been achieved.

It was a long, hard road for Leonard. He had to fight on several occasions to keep his mountain. In 1994 the county wanted to turn Slab City into a fee-based campground. Because Salvation Mountain was a religious monument they could not implement a fee-based campground. The county tried to make claims that the yellow paint used on the design of the mountain was toxic. They claimed that Salvation Mountain would have to be removed. They had soil engineers deem the location a toxic hazard. This did not stop Leonard. He hired his own soil engineers to test the soil and they found nothing but clean soil. Leonard won the battle that time. And guess what? He got more free publicity out of the battle than he ever dreamed possible. The story made it to the L.A. Times and other news networks.

The newest section of Salvation Mountain, the museum.

The Salvation Mountain that stands today is really a second version. The first version collapsed after a light rain destroyed the entire mountain. Leonard says he asked God to help him build it again. Using a different combination of materials, combining the adobe clay with bales of hay, Leonard rebuilt Salvation Mountain. On the dome, a section in the newer museum portion of the project, he made sure each bale had a support beam bolted to the bales. The support beams were branches Leonard found in the surrounding desert. Visitors brought him car windows and other odds and ends that he inserted to bring light into his museum.

Leonard Knight was a simple man with a simple message . . . Jesus loves you. He was an artist, a man of faith and a man with more determination and purpose than most. 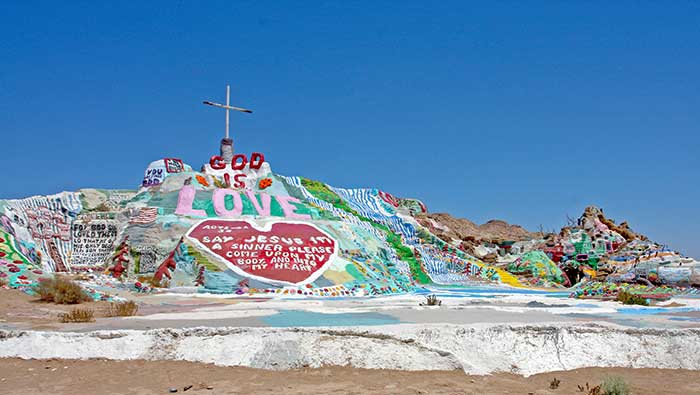 A Visit to Salvation Mountain

Leonard Knight lived on the property of Salvation Mountain in one of the old vehicles that was part of the project. He welcomed all visitors and was always happy to give tours and to tell people about his project. After all, it was his life’s purpose, to spread the word! You can still stop by and visit Salvation Mountain. You can take a walk up the yellow brick road to the top of the Mountain for a view of the surrounding area. Tour the museum, the last section of the project that Leonard built. He built and painted trees out of car and tractor tires covered with clay. The branches are made from wood he found. Leonard covered them with adobe clay and punched in colorful flowers. If you had some spare paint lying around your garage, you could take it out to Leonard. He always welcomed more paint. He estimated that he used over 100,000 gallons of paint over 25 years.

Salvation Mountain is located at Slab City near Niland, CA and the Salton Sea. There is no running water or electricity at the location.

Author's Note - Sept. 2015: Time took its toll on Leonard Knight and his Salvation Mountain. In 2010 his hearing and eyesight began to fail, forcing him to leave his beloved Salvation Mountain. In December of 2011, additional health problems caused his move to a caregiver facility east of San Diego, CA.  Leonard tried to visit the Mountain every few months when possible.

Leonard Knight died on February 10, 2014 at the convalescent hospital in eastern San Diego County where he had been a resident for more than two years. He had suffered the ravages of diabetes, along with other ailments of old age. He was 82 years old.

Salivation Mountain is now being cared for by a non-profit group, Salvation Mountain Inc. It has hired a caretaker to maintain the site, and to protect it from vandals and thieves. The desert's natural elements, rain, wind, and heat, create the need for constant maintenance of Leonard Knight's Salvation Mountain.

Click here for more about Slab City and Salvation Mountain.

More on the area

Salvation Mountain, East Jesus and the Kinetoscope are all located in Slab City near Niland, CA, USA.