Frankly, I don’t think I understand Scott August – composer, producer, keyboardist and master of the Native American flute – very well. He just runs counter to what I would have anticipated. He clearly charts his own course.

Although he was born, raised and educated in the megalopolis of Los Angeles and Orange County, he seems to connect less with the urban environment of southern California than with the desert basins, canyonlands and mountain ranges of the greater Southwest. Although he has composed and produced the scores for hundreds of motion pictures, commercials and video projects, his music speaks, not to the

urgent and sometimes frenetic life of filmmaking in Hollywood, but rather to the serenity of a sunrise over Monument Valley. Although his geographic roots lie in the capital of narcissism, where stars often sell themselves rather than their work, August showcases, not himself, but rather his music. It seems to take on a life of its on, offering a melodic refuge for his audience.

If I can’t quite rationalize his musical directions, I sense that in his performances, Scott August has what the Spanish call duende, a common, but difficult-to-define, term that means something like a special and unselfconscious “charisma” or “presence.” He can transport you to another level of experience—a characteristic of those with duende. It brings him repeated calls for performances at the grand natural stages of the Southwest – Grand Canyon, Canyon de Chelly, Monument Valley, Bryce Canyon – as well as at museums, festivals and institutions across the region. “I want to take my audience on a journey,” he told me in a recent telephone interview. That is worth remembering.

“I came from a musical family,” August said. “My grandfather played concert violin, and he also played violin and was a concert master for films. My father played the clarinet, and he also played some piano and guitar. My mother played the violin. Our home was full of music. I began taking lessons on the cello when I was seven. I began playing the piano at 17. In school at the University of California in Los Angeles, my music got radio play on the local National Public Radio station. That led to my work in motion pictures, video and commercials.”

As a “noted composer and producer of music for film and video, August has, since 1989, composed music and sound design for hundreds of films, commercials and video projects, for clients such as NASA, The Discovery Channel, Lexus, Chevrolet, HBO, Nabisco, Minolta and many others,” according to his Internet site, Cedar Mesa Music. “His music was featured in the Olympic village during the ’96 Olympics in Atlanta, and one of his projects for NASA is on permanent display at the Kennedy Space Center in Florida.”

Even as his commercial career bloomed, however, Scott August nurtured a dream of producing what he called “a different kind of musical experience.” He said, “I first heard music from instruments from other cultures around the world when I was about eight. I began to think even back then about ways to combine the sounds of those instruments into something that there wasn’t really a term for at the time, although we now call it ‘World Music.’” He said that he thought, not about the

“cultural implications” the instruments might suggest, but rather about the sounds and how they might “come together” into a meaningful and symbiotic whole. “I wanted to create an atmosphere, a sense of place,” in my music, he said. Throughout his career, that “desire never went away,” although he did not know in the beginning just where it might lead.

He came to a turning point – a moment of discovery – in his music in 1996, in his early 30’s, when he visited the ancient and near legendary village of Acoma, a pueblo built on the crest of a 350-foot high mesa in west central New Mexico. In the museum gift shop just north of the mesa, he bought a recording, on an impulse, of music that featured the Native American flute. The melodies had a “haunting, evocative sound” that lingered, evolving, developing and maturing, in the musical corners of his mind. At length, he realized that he had found the key to his dream.

Two years after his visit to Acoma, August bought his first Native American flute. “I knew that I had found something special—my instrument. I took to it naturally. I now have three dozen flutes,” he said. I mentioned to him that one of our Native American performers feels that the flute finds the musician, not the other way around. “That is something like what happened to me,” August said. Within months after he picked up his first Native American flute, he had mastered the instrument. (August insists that he has not “mastered” the flute or any other instrument, that he is “always learning.”) He began to record, to realize his dream of creating “a different kind of musical experience.” 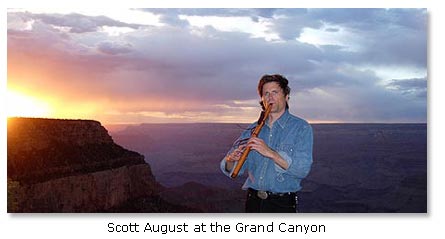 He released his first recording, “Distant Spirits,” in 2001, and his second, “Sacred Dreams,” in 2003. In the Cedar Mesa Music Internet site, they are described as “New Age/Native American influenced music featuring the cedar flute, soft guitars, quiet pianos, pulsing world-beat percussion and a host of instruments from around the world accompanied by the natural sounds of the American Southwest.” He had set out to take his audience on a musical journey, a fulfillment of his vision.

His first recording, the 10-track “Distant Spirits,” which was nominated for a Native American Music Award, received high praise:

“Close your eyes and allow yourself to drift to the land of ‘Distant Spirits.’ Listen to the gentle, soft sounds of the wind, the streams, the night call of the coyotes.” Awakenings Magazine

“...a breathtaking glimpse of the ancient Southwest spiritlands.” Music Design, In Review

“...a mainstream recording that integrates the use of the contemporary Native American styled flute with other world instruments into a tapestry of a very enjoyable musical journey for the listener... There is a wide variety of melodies, tempos rhythms, dynamics, and textures designed to evoke emotions out of the listener...” Voice of the Wind: Journal of The International Native American Flute Association

While Scott August has chosen his own – and what, to me, has been perhaps an unpredictable – course in his life, he has also developed a clear and personal vision for his music. “Art,” he says, referring not only to music, but to the entire landscape of creative expression, “should transport you to another place.” You can subscribe to his free e-mail list at his Cedar Mesa Music Internet site, http://www.cedarmesa.com You will receive a free quarterly e-mail newsletter that covers new releases, concert appearances and special sales notices.