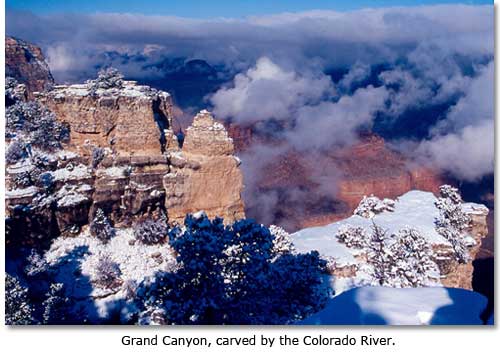 "The Colorado River," said the Bureau of Reclamation in its Internet site, "is more than 1400 miles in length, making it the third longest river in the United States. The watershed covers more than 244,000 square miles, 1/12 of the area of the lower 48 states. Although the river begins in the Rocky Mountains, most of its length drains the arid Southwest region."

Fed primarily by rainwater and snowmelt, the Colorado River rises in north central Colorado and flows through southeastern Utah and northwestern Arizona (including the Grand Canyon). It serves as the borders between Nevada and Arizona and between California and Arizona. It empties into the Gulf of California. Important tributaries, also fed primarily by rainwater and snowmelt from our mountain ranges, include the Green River, which rises in western Wyoming; the San Juan River, in south-central Colorado; the Virgin River, in southwestern Utah; the Little Colorado River, in east-central Arizona; and the Gila River, in southwestern New Mexico.

Within the limits imposed by precipitation over time, surplus water can be banked in good years and drawn down in lean years, thanks to a system of major dams, canals and aqueducts. Major impoundments include, for instance, Lakes Mojave and Havasu, on the Arizona/California border; Lake Powell, on the Arizona/Utah border; and Lake Mead – the largest reservoir in the United States – on the Arizona/Nevada border. 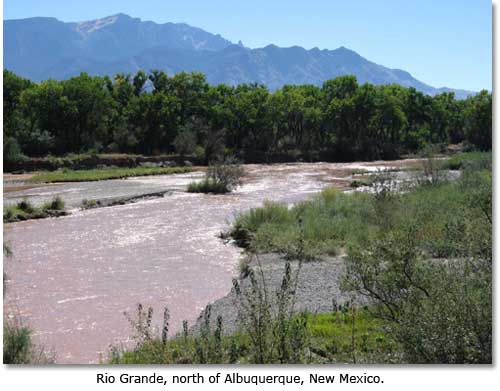 Importantly, as Noah D. Hall, Bret B. Stuntz, and Robert H. Abrams said in their paper "Climate Change and Freshwater Resources," Natural Resources & Environment, "The Colorado River is the only significant water source for much of the Southwest." Altogether it serves a region of some 25 million people, according to Dan McFadden, MSNBC, in his article "Colorado River a Strained Lifeline."

While Southern California alone expects its water demand to grow by 37 percent by 2020 according to McFadden, agricultural, municipal, industrial and domestic users are already consuming every drop of surface water available in the basin. Indeed, Colorado River waters have not reached the Gulf of California for years.

The second major source of surface water, the Rio Grande, runs for roughly 1850 miles from its 12,000-foot high source, in the San Juan and Sangre de Cristo Mountains of southwestern Colorado, to the Gulf of Mexico, at the southernmost tip of Texas. Its watershed encompasses more than 300,000 square miles in the United States and Mexico, although only about half that arid region actually contributes water to the river, said the Encyclopaedia Britinnica.

Fed primarily, like the Colorado River, by rainwater and snowmelt, the Rio Grande courses down the steep mountain slopes of Colorado, runs southward through New Mexico's heart, turns southeastward at El Paso/Juarez, describes the great arc of the Big Bend, then flows southeastward to the Gulf. From El Paso/Juarez to Brownsville, a distance of more than 1000 miles, the river defines the border between the United States and Mexico, dividing the state of Texas from the Mexican states of Chihuahua, Coahuila, Nuevo Leon and Tamaulipas. "Many of the river tributaries are intermittent streams," said USGS in "Monitoring the Water Quality of the Nation's Large Rivers," published in its Science for a Changing World Internet site. "Much of the flow is controlled by numerous reservoirs in the basin. Throughout the basin, an extensive system of water structures captures and controls the flow of water in the subbasins to meet regional needs for flood control, power generation, and storage for domestic, agricultural, and industrial purposes." Important impoundments include the Elephant Butte Reservoir, with a capacity of about two million acre feet, and the Caballo Reservoir, with a capacity of about 226 thousand acre feet—about the same capacity as Lakes Mojave and Havasu combined.

Overall, the Rio Grande carries far less water than the Colorado River. It may receive several hundred thousand acre feet of water from melting 50-foot high snow deposits near the peaks of the mountains in the spring, according to the Colorado State University Internet site. It receives varying amounts of waters from the Chama River in northern New Mexico, the intermittent Puerco River in central New Mexico, the Pecos River and Devils River below Big Bend, Mexico's Concho River just west of Big Bend and Mexico's Salado River some 150 miles upstream from the Gulf of Mexico. It serves a region with more than some 13 million U. S. and Mexican people, according to the NBC Weather Internet site (including nearly three million in the El Paso/Juarez area alone).

In times of drought, the surface waters that the Rio Grande receives from the Colorado Mountains and New Mexico tributaries can become completely exhausted by the time the river reaches Fort Quitman, about 40 miles downstream from the El Paso/Juarez region. It can run as no more than a dry stream bed through the Chihuahuan Desert for the next 150 miles, until it reaches the border cities of Presidio and Ojinaga, where Mexico's Concho River brings new life to the Rio Grande. The segment of the river from Colorado to Fort Quitman is often called the Upper Rio Grande Basin. The segment from Fort Quitman to the Gulf of Mexico is called the Lower Rio Grande Basin. In effect, the historic Rio Grande, serving an area with rapidly increasing population and growing demands, now functions as two separate rivers.

Increase in the demand for water across the Southwest mirrors the growth of population. Exemplifying the trends, total consumption just in the southeastern counties of California and in the states of Arizona and New Mexico increased by nearly nine percent just from 1985 to 2000, or from about 13.47 million acre feet to about 14.63 million acre feet during the 15-year period. Some 30 to 40 percent was withdrawn from ground waters and the balance, from surface waters, according to data from Konieczki's and Heilman's Water-Use Trends in the Desert Southwest—1950 – 2000.

While some 80 to 90 percent of the water was allocated to agricultural uses, an increasing percentage was directed to domestic consumption—an indication that, as Konieczki and Heilman said, "The population in the Desert Southwest is among the fastest growing in the country." 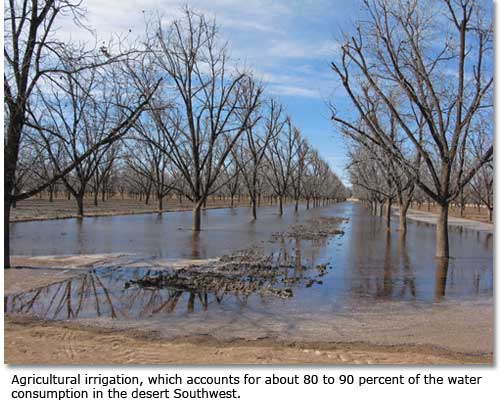 Concurrently, in Mexico's part of the Rio Grande Basin, water demands and population continue to grow. For instance, even though the city's aquifer – the Hueco Bolson – is dwindling rapidly, tens of thousands of Mexican citizens continue to pour into Juarez, across the Rio Grande from El Paso, every year. The estimated population of the city now approaches two million, which is about equal to the population of the entire state of New Mexico.

The combination of growing demand and shrinking water resources across the Southwestern United States and northeastern Mexico have raised a galaxy of physical, social and political problems. Water managers of the future will have tough choices to make.

Click here to read about the future for water in the Southwest.