What Is a Desert? 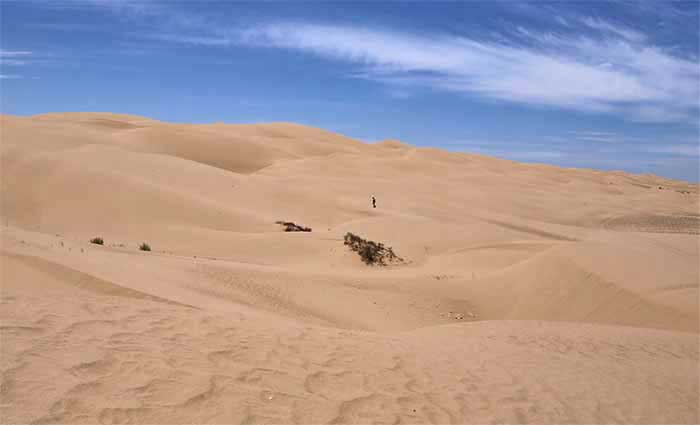 Deserts are often defined as areas that receive less than 10 inches of average annual rainfall, but a more accurate defining factor is aridity. In addition to low rainfall, deserts are characterized by a high rate of water loss from the ground (evaporation) and through plants (transpiration). Together this is called evapotranspiration. Potential evapotranspiration is the amount of water that would be lost through evaporation and transpiration if it were available. Scientists measure this using a large pan of water under controlled conditions. In deserts the rate of potntial evapotranspiration exceeds the average annual rainfall by factors ranging from 2:1 to 33:1 or more. In other words, a desert is arid.

Another characteristic of a desert environment is the uneven and unpredictable nature of the little precipitation that occurs. The average annual precipitation is a poor predictor of rainfall in any given year. In some years a desert may receive what seems like abundant rainfall, while in most years rainfall is meager. And some years it may not rain at all.

Dryness influences other characteristics of deserts. Water vapor, either as humidity or cloud cover reflects heat, with a cooling effect. Areas with low humidity, few clouds and bodies of water, and little vegetation absorb most of the sun's radiation, thus heating the air at the soil surface. At night the same conditions allow the heat to be radiated back into the atmosphere. Thus, temperatures can be extreme both daily and seasonally.

Clear dry air transmits about 90% of available sunlight to the ground on a typical desert day compared to 40% in a typical humid climate. The intense sunlight includes ultraviolet radiation, which is capable of causing severe tissue damage to plants and animals. When you go to the desert, remember to bring your dark glasses and sun screen!

Desert soil is characteristically coarse, allowing what little moisture it receives to rapidly pass through, thus making it less available for plants. In addition, the high evaporation rate means that salts accumulate, making the soil alkaline and limiting plant growth. Lack of water also limits plant growth, or what is known as primary productivity. This in turn limits the size of individual animals as well as animal populations. Because they impose such harsh extremes of heat and aridity, deserts are among the most fragile ecosystems on the planet.

Locations of deserts have changed throughout geologic time as the result of continental drift and the uplifting of mountain ranges. Modern desert regions are centered in the horse latitudes, typically straddling the Tropic of Cancer and the Tropic of Capricorn, between 15 and 30 degrees north and south of the equator. Some deserts, such as the Kalahari in central Africa, are geologically ancient. The Sahara Desert in northern Africa is 65 million years old, while the Sonoran Desert of North America reached its northern limits only within the last 10,000 years. 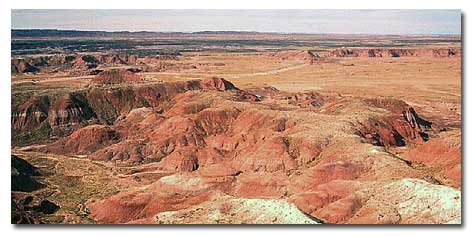 Geomorphology of the Deserts

Three of the four major deserts of North America — Great Basin, Mojave, and Sonoran — are contained within a geological region called the Basin and Range Province, lying between the Rocky Mountains to the east and the Sierra Nevadas to the west, and extending south into the state of Sonora in Mexico. While the distinctiveness of each desert is based on the types of plant life found there (determined both by evolutionary history and climates), the geological structures of these three deserts are rather similar.

Captain John C. Fremont coined the term Great Basin to designate a portion of the Basin and Range Geographical Province bordered by the Sierra Nevadas on the west, the Rocky Mountains on the east, the Columbia Plateau to the north and the Mojave and Sonoran deserts to the south. Actually, the region is a series of basins, interrupted by roughly north-south oriented mountain ranges produced by tilted and uplifted strata. Each range typically has a steep eastern slope and a gentler slope on the west. Today the basins collect any water that falls as rain or snow in short-lived lakes called playas. During the Pleistocene interglacial, a wet period, much of the Great Basin was flooded, producing Lake Lahotan. The lake evaporated during the last 12,000 years, leaving only a few salty lakes between the Sierra Nevadas and the Rocky Mountains.

The Salton Basin in the Colorado Desert was flooded by Colorado River waters when it temporarily shifted course a thousand years ago. A 2,000 square mile lake, Lake Cahuilla, was formed and eventually disappeared about 500 years ago. The high water mark can clearly be seen from California State Highway 86, a full 40 feet above the elevation of the current city of Indio, and the Imperial Valley. Today’s Salton Sea was formed accidentally in 1905-1907 when Colorado River irrigation waters broke through a dam. 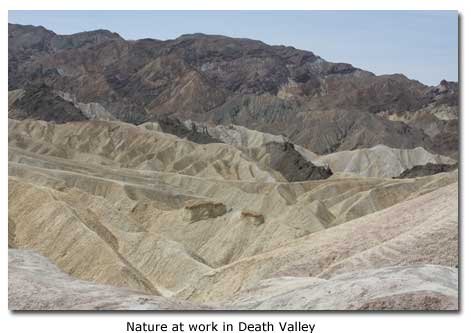 Desert landscapes were shaped by the forces of erosion thousands of years ago during periods of heavy rainfall. They have been preserved to the present by a lack of the same. Rain falling on rocky mountains and hillsides picked up loose sediment, clay, sand, cobbles, and boulders. Gravity caused the water to flow downhill, carrying sediments down steep-sided canyons toward the basin. As it reached the pediment, or foot of the mountain, where the canyon mouths widened, the water spread out across a broad area. Because the slope was more gradual, the water slowed down and began to drop its load. Water-carried sediment – called alluvium – was deposited at the mouth of the canyons in a fan-shaped landform, an alluvial fan. Over time, the alluvial fan’s many waterways, called braided streams, intertwined across the fan. When many alluvial fans along the base of a mountain range coalesce, the landform is called a bajada (a Spanish word meaning “lower”). The alluvial fans we see today were formed over thousands, even hundreds of thousands of years. Today only rarely is there enough heavy rainfall to allow for surface runoff.

Plant communities that live on the alluvial fans change according to the availability of water and the oxygen content in the soil. For example, in the Colorado Desert upper slopes are composed of gravelly soil easily penetrated by roots. Ocotillo, cacti and agave grow there. Toward the base of the fan where finer soil particles exclude oxygen and water, the roots are shorter and vegetation is more sparse. The silt, clay and salt on the playa make it difficult for seeds to germinate. Plants are not found there, but saltbush communities — plants adapted to tolerate a higher concentration of salt — can be found along the upper edge.

Desert washes flow only during and immediately after storms, connecting mountain drainages to lower elevations. Washes have water close to the surface and support a variety of trees and shrubs, including mesquite, palo verde, ironwood, and smoke trees.

Video - Dust devils are created when air near the surface becomes much warmer than the air above.  This creates an instability in which the warm air rises.

North American Deserts and Deserts of the World

Back to Desert Life