To survive, desert plants have adapted to the extremes of heat and aridity by using both physical and behavioral mechanisms, much like desert animals. Plants that have adapted by altering their physical structure are called xerophytes. Xerophytes, such as cacti, usually have special means of storing and conserving water. They often have few or no leaves, which reduces transpiration.

Phreatophytes are plants that have adapted to arid environments by growing extremely long roots, allowing them to acquire moisture at or near the water table.

Desert perennials often survive by remaining dormant during dry periods of the year, then springing to life when water becomes available. 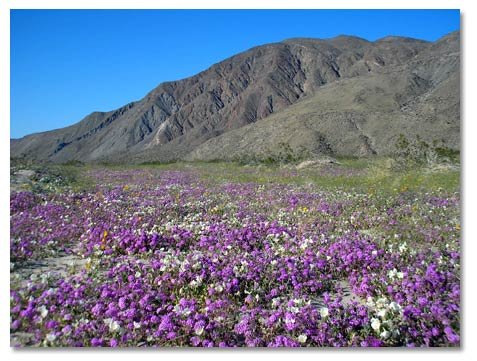 Most annual desert plants germinate only after heavy seasonal rain, then complete their reproductive cycle very quickly. They bloom prodigiously for a few weeks in the spring, accounting for most of the annual wildflower explosions of the deserts. Their heat- and drought-resistant seeds remain dormant in the soil until the next year's annual rains. 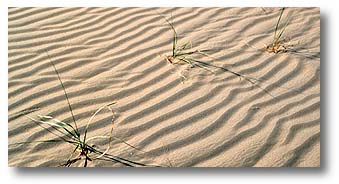 The physical and behavioral adaptations of desert plants are as numerous and innovative as those of desert animals. Xerophytes, plants that have altered their physical structure to survive extreme heat and lack of water, are the largest group of such plants living in the deserts of the American Southwest.

Each of the four southwestern deserts offers habitats in which most xerophytic plants survive. But each is characterized by specific plants that seem to thrive there. The Great Basin Desert is noted for vast rolling stands of Sagebrush and Saltbush, while in the Mojave Desert, Joshua Trees, Creosote Bush, and Burroweed predominate. The Sonoran Desert is home to an incredible variety of succulents, including the giant Saguaro Cactus, as well as shrubs and trees like mesquite, Paloverde, and Ironwood. The Chihuahuan Desert is noted for mesquite ground cover and shrubby undergrowth, such as Yucca and Prickly Pear Cactus. 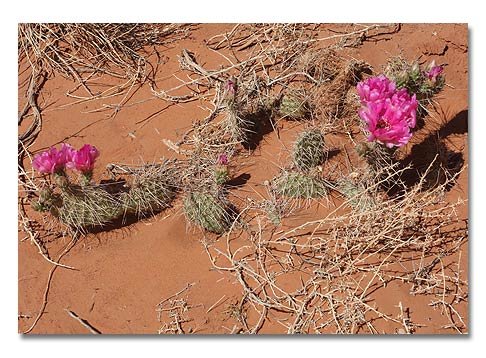 Cactus, xerophytic adaptations of the rose family, are among the most drought-resistant plants on the planet due to their absence of leaves, shallow root systems, ability to store water in their stems, spines for shade and waxy skin to seal in moisture. Cacti originated in the West Indies and migrated to many parts of the New World, populating the deserts of the Southwest with hundreds of varieties, such as the Beavertail Cactus and Jumping Cholla.

Cacti depend on chlorophyll in the outer tissue of their skin and stems to conduct photosynthesis for the manufacture of food. Spines protect the plant from animals, shade it from the sun and also collect moisture. Extensive shallow root systems are usually radial, allowing for the quick acquisition of large quantities of water when it rains. Because they store water in the core of both stems and roots, cacti are well-suited to dry climates and can survive years of drought on the water collected from a single rainfall.

Many other desert trees and shrubs have also adapted by eliminating leaves -- replacing them with thorns, not spines -- or by greatly reducing leaf size to eliminate transpiration (loss of water to the air). Such plants also usually have smooth, green bark on stems and trunks serving to both produce food and seal in moisture.

Phreatophytes, like the mesquite tree, have adapted to desert conditions by developing extremely long root systems to draw water from deep underground near the water table. The mesquite's roots are considered the longest of any desert plant and have been recorded as long as 80 feet. Botanists do not agree on the exact classification of the three mesquite trees: the Honey Mesquite, Screwbean Mesquite and the Velvet Mesquite, but no one disputes the success of their adaptation to the desert environment. Mesquites are abundant throughout all the southwestern deserts.

The Creosote Bush is one of the most successful of all desert species because it utilizes a combination of many adaptations. Instead of thorns, it relies for protection on a smell and taste wildlife find unpleasant. It has tiny leaves that close their stomata (pores) during the day to avoid water loss and open them at night to absorb moisture. Creosote has an extensive double root system -- both radial and deep -- to accumulate water from both surface and ground water.

Some perennials, such as the Ocotillo, survive by becoming dormant during dry periods, then springing to life when water becomes available. After rain falls, the Ocotillo quickly grows a new suit of leaves to photosynthesize food. Flowers bloom within a few weeks, and when seeds become ripe and fall, the Ocotillo loses its leaves again and re-enters dormancy. This process may occur as many as five times a year. The Ocotillo also has a waxy coating on stems which serves to seal in moisture during periods of dormancy. 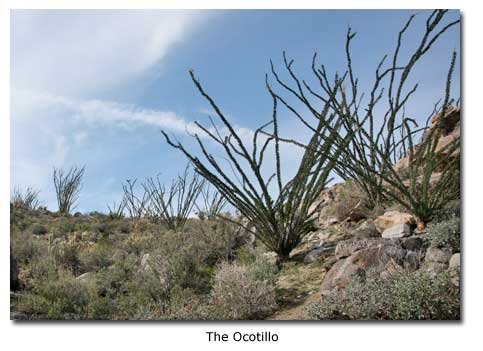 Another example of perennials that utilize dormancy as a means of evading drought are bulbs, members of the lily family. The tops of bulbs dry out completely and leave no trace of their existence above ground during dormant periods. They are able to store enough nourishment to survive for long periods in rocky or alluvial soils. The Desert Lily, also known as the Ajo, is found at a depth of 18 inches or more. Adequate winter rains can rouse it to life after years of dormancy.

The term "annuals" implies blooming yearly, but since this is not always the case, desert annuals are more accurately referred to as "ephemerals." Many of them can complete an entire life cycle in a matter of months, some in just weeks.

Contrary to the usual idea that deserts are uniformly hot, dry and homogeneous in their lack of plant life, they are actually biologically diverse and comprise a multitude of micro-climates changing from year to year. Each season's unique precipitation pattern falls on a huge variety of mini-environments. And each year in each of these tiny eco-niches, a different medley of plants bloom as different species thrive.

Desert plants must act quickly when heat, moisture and light inform them it's time to bloom. Ephemerals are the sprinters of the plant world, sending flower stalks jetting out in a few days. The peak of this bloom may last for just days or many weeks, depending on the weather and difference in elevation. The higher one goes, the later blooms come. Different varieties of plants will be in bloom from day to day, and even hour to hour, since some open early and others later in the day.

Ephemerals such as the Desert Sand Verbena, Desert Paintbrush and Mojave Aster usually germinate in the spring following winter rains. They grow quickly, flower and produce seeds before dying and scattering their progeny to the desert floor. These seeds are extremely hardy. They remain dormant, resisting drought and heat, until the following spring -- sometimes 2 or 3 springs -- when they repeat the cycle, germinating after winter rains to bloom again in the spring. There are hundreds of species of ephemerals that thrive in the deserts of the American Southwest.

If you examine desert soils closely, you will dispel forever any notion you might have of the desert as a barren environment, for you will likely find dozens of both annual and perennial seeds in every handful of desert soil. In the Sonoran Desert, seed densities average between 5,000 and 10,000 per square meter. The world record is over 200,000 seeds per square meter.

This "seed bank" attests to the remarkable reproductive success of desert flora, made possible by their symbiotic relationship with desert fauna -- birds, insects, reptiles and even mammals. Animals aid in both fertilization and dispersion of seeds, assuring the continued profusion and diversity of plant life throughout the deserts of the Southwest. For more information see

Back to Desert Life