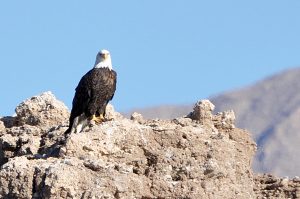 This is a slight decline since last January’s count of 161 bald eagles, although, park biologist Ross Haley is not surprised by the outcome.

“I expected the number to be down somewhat this year due to the mild winter we are experiencing in the west,” Haley said, “and possibly exacerbated somewhat by the West Nile Virus die-off.”

In late 2013, bald eagles from the Great Salt Lake area near Salt Lake City, Utah, experienced a die-off attributed to an outbreak of the West Nile Virus, which resulted from eating infected eared grebes, according to the Utah Division of Wildlife Resources. Haley said this could result in lower numbers being found on lakes Mead and Mohave this season.

“These data certainly make me wish we had been keeping track of numbers of all these species through all of the years,” Haley said.

The teams hit the waters of the 1.5 million-acre national recreation area shortly before sunrise and concluded the survey around sunset.

At a maximum speed of 15 miles per hour, spotters searched through binoculars for the raptors. Both immature and adult bald eagles could be seen perched on rocky cliff tops, sipping water on the shoreline or soaring in the air.

The Overton Arm at the north end of the park, where the Virgin and Muddy rivers meet Lake Mead, is where the highest count of bald eagles was found. Haley and his team spotted 18 adult and 28 immature eagles in this area.

Bald eagles migrate from the north and can traditionally be spotted at Lake Mead NRA from late-November to March.

The bald eagle has been listed several times as endangered due to habitat destruction, illegal shooting and contamination of its food source.

Congress enacted the Bald and Golden Eagle Protection Act in 1962 to protect eagles. Bald eagles also fell under the protection of Endangered Species Preservation Act of 1967, and they were one of the original species covered by the present Endangered Species Act of 1973.

In 1972, a ban was placed on DDT, an organochloride pesticide used to control malaria and typhus during World War II. The organochlorides were also used as agricultural insecticides which resulted in poisoning most of the main nesting and feeding areas for the bald eagle, according to USFWS.

“The chemical is still present at environmentally significant levels in many areas in the U.S. over 41 years later,” Haley said.

The ban on DDT in the U.S. paved the road to recovery for the bald eagle. In June 2007, the bald eagle was removed from the endangered and threatened species list, but still remains protected under the original Bald and Golden Eagle Protection Act and Migratory Bird Treaty Act.

Although this year’s eagle count is down from last year’s near record-breaking numbers, Haley is pleased with the amount they saw this year. “It is still the fifth highest count we have had since the survey began in 1995,” he said.