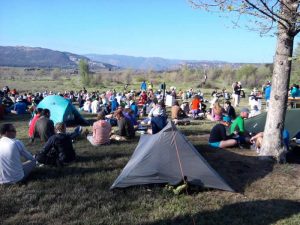 And they’re off! Over 700 hikers and supporters of the Pacific Crest National Scenic Trail (PCT) attended the 14th Annual Day Zero PCT Kick-Off event at Lake Morena County Park April 27 and 28. The event is organized by trail supporters and “Trail Angels” for the estimated 276 “through hikers” that will attempt to hike the entire PCT from Mexico to Canada in 2012. The first section of the trail crosses the BLM’s Hauser Mountain Wilderness Study Area and the Cleveland National Forest before entering Lake Morena County Park, where last week hikers could take advantage of comfortable camp sites, hot showers, free food, and lots of support and encouragement.

The Pacific Crest Trail starts on BLM-managed public land on the US-Mexico border near Campo in San Diego County, and continues north for 2,650 scenic miles to the Canadian border. The annual Kick-Off Event helps hikers get a jump start on the PCT from the start of the trail to Lake Morena, 20 miles north of the border.

Event organizers also invited the Pacific Crest Trail Association, the BLM, the Forest Service, the National Park Service, and vendors to share trail information and the latest in hiking gear. Greg Hill, Greg Thomsen, and Law Enforcement Ranger Joseph Funk from the California Desert District staffed a BLM booth with materials on the National Landscape Conservation System and other public lands crossed by the PCT.

The BLM also promoted the bicentennial of the General Land Office with a historic themed display on the role of the GLO in surveying the public lands. In addition to the booths, displays, and seminars on everything from trail cooking to bears, the Annual Pacific Crest Trail Kick-Off Event included the Pacific Crest Trail Short Film Festival and awards for films shot by hikers on the Trail in 2011.

The event concluded with a group photo of the through hikers before they set off on their 2,650 mile journey. All the organizers and participants were pleased to see the BLM at this year’s event and came away with a greater appreciation of the history and resources of the public lands along the Pacific Crest Trail.

For more pictures, go to the BLM page here: https://www.blm.gov/ca/st/en/info/newsbytes/2012/529_extra-pacific.html