Names have been changed to protect the innocent and anonymous.

I have a one track mind.  Lately, all I did was think about sleep and getting ready for sleep.  I was moving slowly, feeling a chill, and noticing the sun setting a little earlier each day, telling me the clock-changing time was soon here.  Oh, and there was the desire to drink more and more .. and more… water to build up my fluids.  These were all signs to me.  Oh, by the way, my name is Izzy. 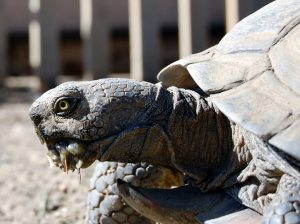 Interesting phone conversations filled the house lately.  Though, admittedly, I only heard snippets of talk in between my naps, and my naps had been getting longer and more frequent.

One day I was hiding in the kitchen cupboard, when, in one of those phone conversations, I heard Rose-Marie say, “How long would you need him to stay with us…  Funds are tight, but I am sure we can handle him.”  Unfortunately, I fell asleep before I heard any anything else or found out who or what “he” was. 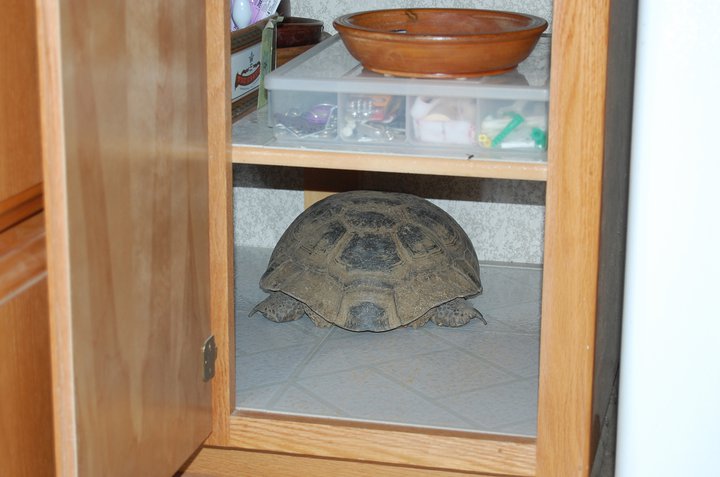 Hiding in the Cupboard

Another time, while under Rose-Marie’s bed,  I heard her say on the phone, “He’ll need a place to sleep.”  Again, I fell asleep before I could hear anything else.  Like I said, lately all I could think of was sleep.  My narcoleptic tendencies made following conversations hard to do because often I would only hear parts of conversations before I fell asleep.  It also seemed like I was hearing only the worst parts of the conversations.

To me, the snippets of different conversations that I actually  heard–when taken together– gave me the impression Rose-Marie was going to take in another foster animal.

I decided to take a walk.  It took a while, but I made it out from under Rose-Marie’s bed and started towards the burrow I was working on for this winter’s sleep. 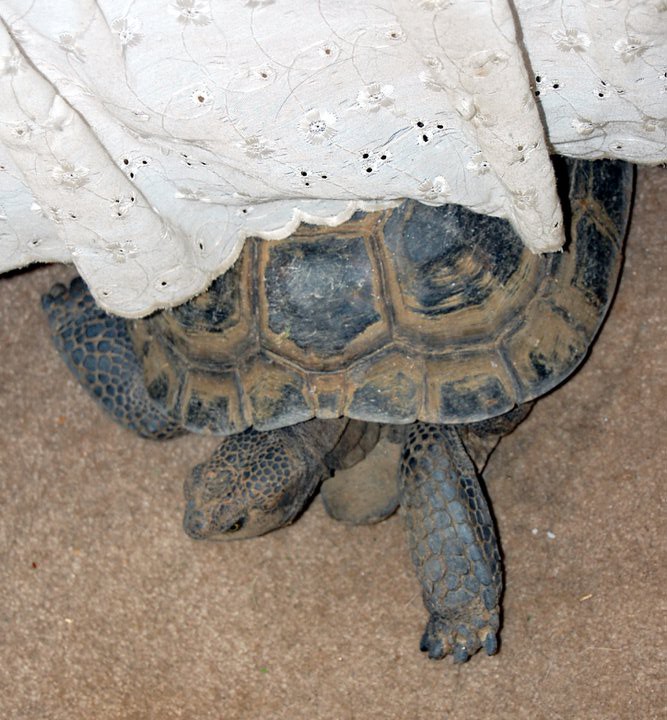 Coming out from under Rose-Marie’s Bed

As I traveled through the house to reach the back door, I was forced pass Tommy Cat and Rescued Ralphie.  They were preoccupied with each other and I slipped right through their staring contest. 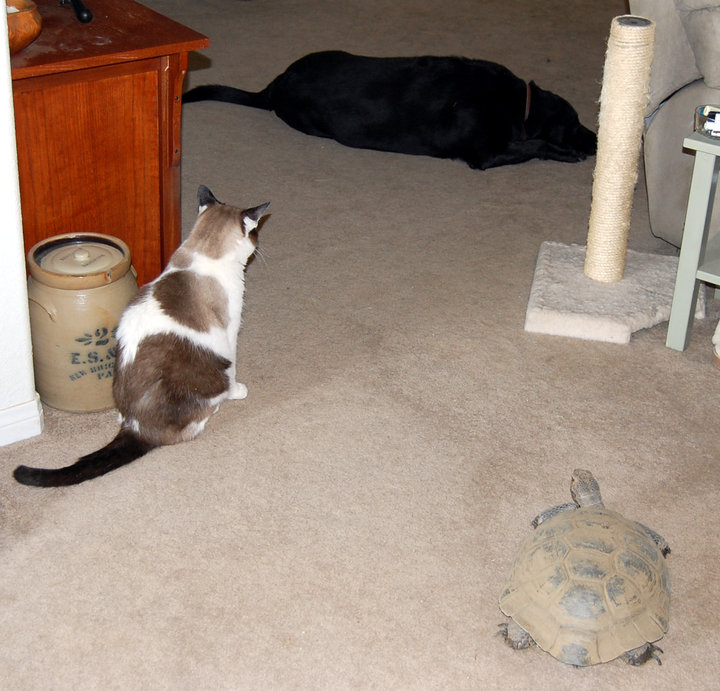 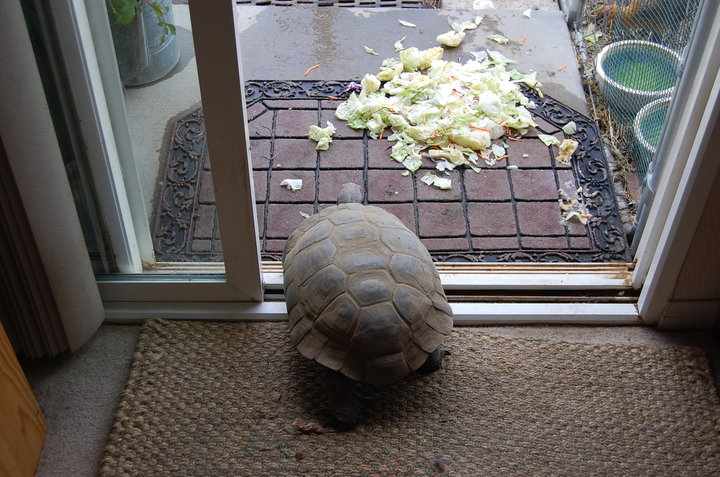 I finally made it outside about an hour after coming out from under the bed.  At the back door, I saw the food left behind for me, but I passed it by.

Outside there was a dish of water and I stopped for a drink.  I saw my reflection in the water.  My face had not changed much over the last 40 years except for the slow healing of the scar I still had from when I was attacked in the wild by a coyote years before Rose-Marie took me in and rescued me.  I sipped the water.  I continued sipping until the dish was empty.

The thought of another foster conflicted me.  Rose-Marie is a great mom.  Right now, even though I am one of the smallest and certainly quietest foster, Rose-Marie gives me a huge amount of one-on-one attention that the larger, outdoor animals do not get.  Who does not enjoy attention like that?   A new foster will certainly get extra TLC –at least– in the beginning.  I did not know what the foster was going to be, but I hoped at least it was not another desert tortoise.  I am the only desert tortoise on a rescue farm where there is at least two of every animal.  Indeed, the four mountain goats we have constantly verbalize at each other and riling up the dogs and horses.  They are aggravating.

As I was daydreaming, I forgot that I was ultimately going to my burrow and I was just slowly and aimlessly walking around the yard when Franky gave me a strange look.  “You look tired”, he said. 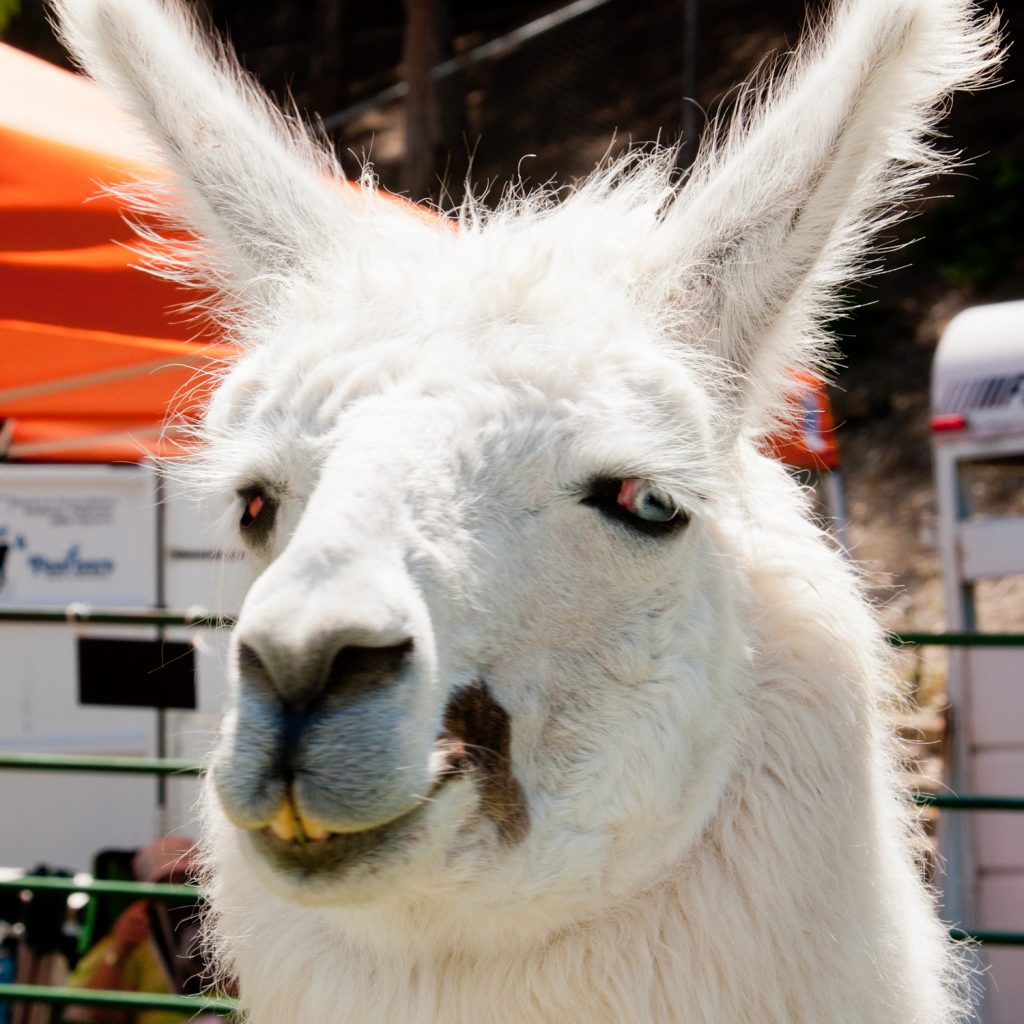 Franky on the farm…Not the brightest bulb?

Franky was certainly not one of the brightest animals on the farm.  He was not even the brightest alpaca; that honor went to his sister Franny.  In any event, I preferred chatting and visiting with the laid back Barbados Black-Belly Sheep, rather than most of the other critters on the farm. 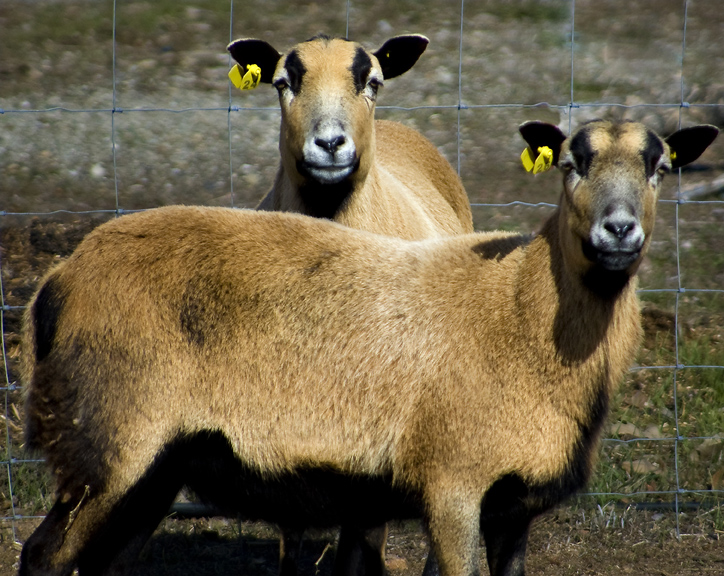 Despite my doubts about Franky’s IQ, I had a question for him.  “Were you fed your normal food today? I heard money for supplies has been tight lately.  Rose-Marie has been trying to get me to eat more iceberg rather than my usual romaine lettuce.  I am not happy with this change.  I eat romaine lettuce and have been eating romaine lettuce for at least 20 years.  Rose-Marie knows that. Rose-Marie also knows us tortoises are very picky by nature.  This whole thing is very strange.”

Franky was no help; he just stared at me with his crossed albino white eyes.

So, I moved on, the sun starting to set behind the mountains separating the valley from the L-A basin.  A cooler than usual breeze tickled my nose and blew away a blade of grass that had become stuck to my nose.  I crawled into my burrow head first and headed down the tunnel.  When I was fully in the burrow, I turned around so I could watch the entrance tunnel.  I sighed and wondered whether the good times at Rose Marie’s Rescue Farm were over and whether I would wake up from hibernation this year at a tortoise preserve somewhere or would be shipped off to one next year.  What really troubled me was that the other animals on the farm were to some extent moneymakers, producing salable wool, eggs, milk or rides for kids.  I was just overhead and “Business 101” says always work to reduce overhead.

The chill blew down the tunnel and I pulled myself into my shell. Whatever will happen will happen.  I had to accept that and trust Rose Marie to treat me right, as she had for all these years. 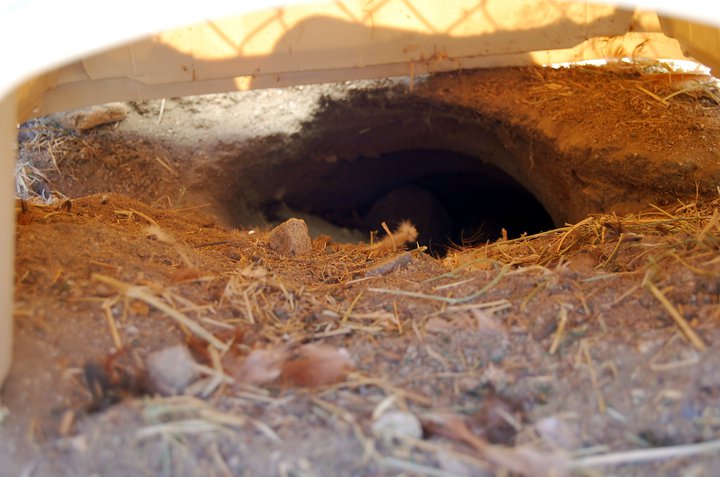 The next day, Rose-Marie woke up early.  Izzy was not in his usual spot under her bed, but he was never awake this early.  Rose-Marie got worried, got dressed, and went outside.  A heavy and cold mist was sitting over the farm limiting visibility and telling everyone winter was near.  Rose-Marie went out to the barn and grabbed a flashlight from the workbench to look for Izzy.  Rose-Marie walked out behind the barn and towards the bush next to the lone Joshua Tree near where Izzy had been burrowing for the last couple of days, fixing up his burrow from last year for this winter’s sleep.  Rose-Marie shined her light towards, but not directly into, the burrow.  As she looked in, light reflected off of Izzy’s brown and green shell.  She then knelt down to get a better look.  Izzy’s head and legs were tucked into his shell.  Izzy was out cold; probably until the spring.

Rose-Marie stood up. wiped the dirt from her pant legs and thought about the good friend she would not see for a few months.

The flashlight caught my attention, but I was still half-asleep (well, maybe three-quarters).  I heard a muffled voice passing down the entrance to the burrow.  I knew it was Rose-Marie’s.  She was saying (best I could tell),  “Sleep well my boy.  We will see you in March or April.  I will be able to get you everything you like by then.  We should have some new funding.  Love you, little guy.”

I dropped a few tears of happiness and then, feeling there was absolutely nothing to worry about.  I allowed myself to fall into full hibernation sleep.

Photos courtesy of someone that would like to remain anonymous, except for the Barbados Brothers, which was taken by the author in Monterey County, CA back-country in January, 2008.