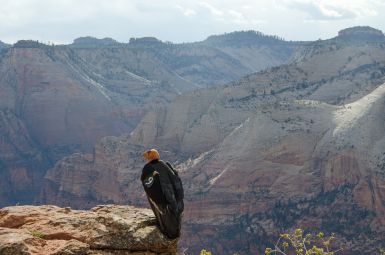 For weeks, biologists from several agencies and groups have focused their attention on a rock cavity at Zion National Park. The cavity is 1,000 feet above a remote canyon floor. Inside the cavity, the biologists were hoping a pair of California condors had hatched an egg. Their hopes were realized on June 25 when a condor chick made its first appearance on the edge of the nest. This chick is the offspring of first-time nesting parents. The occasion is particularly momentous because the results of first-time nesters often fail.

This is the first documented occurrence of California condors raising a chick in Utah, says Eddie Feltes, condor project manager with The Peregrine Fund. This is great news. This pair of condors, and their newly-hatched chick, could be a major step toward California condors reestablishing themselves in southern Utah.

Keith Day, regional wildlife biologist for the Utah Division of Wildlife Resources, says the chick won’t try to fly until November or December. California condors take about six months to fledge, he says. Their fledging period is the longest of any bird in North America. Day says the parents will spend the next year raising the chick. California condors typically produce one chick every other year, he says, so they probably won’t nest again until the early months of 2016. Fred Armstrong, chief of resource management and research with Zion National Park, says that many people are wondering where the nest site is located. Unfortunately, he says, we can’t provide that information because these birds are protected under the Endangered Species Act.

According to Armstrong, Our top priorities are to allow the chick to grow and develop in a natural environment without significant human influence, keep it safe, and to protect park resources in the area where the chick is located. Those who are curious to see what the chick might look like should visit the condor camera at the San Diego Zoo Safari Park at https://www.sandiegozooglobal.org/video/condor_cam. The zoo had a condor hatch in their rearing facility within days of this wild-born condor.

The Peregrine Fund biologists found the nest by following radio and Global Positioning System signals from transmitters mounted on each of the chick’s parents. They started keeping a close eye on the birds after the pair exhibited nesting behavior this past spring.

Biologists and the condor recovery program partner agencies got really excited when the birds started displaying behavior that indicated they were incubating an egg. The excitement grew even more when the pair showed signs they were tending a chick. On June 25, the chick made its first appearance on the edge of the nest.

It was only a matter of time before the birds started nesting in Utah, says Chris Parish, condor field project supervisor with The Peregrine Fund. There is great habitat in Utah. It didn’t take long for the condors to find it.

Working cooperatively with the U.S. Fish and Wildlife Service, the Utah Division of Wildlife Resources, the Arizona Game and Fish Department, the Bureau of Land Management, the U.S. Forest Service, and the National Park Service, The Peregrine Fund has taken the lead on reintroducing and restoring this federally endangered species in northern Arizona and southern Utah.