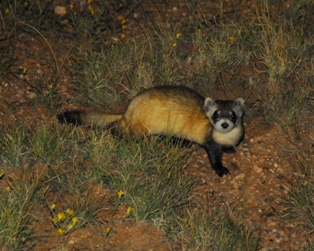 Game and Fish personnel, along with 99 volunteers, scoured the Aubrey Valley west of Seligman for five nights. The results broke several records established during the spring surveys in March.

During the five nights, a total of 93 ferrets were captured, breaking the previous mark of 78 (this number includes recaptures). Twenty-two captures in one night broke the record of 20 set in the spring of 2011. There were 54 separate individuals captured in the fall and 58 in the spring, bringing the minimum population in Aubrey Valley to 112, shattering the 2010 record of 96.

The numbers have Arizona meeting the original goals established for the recovery site, which now boasts a self-sustaining population.

“There is reason for optimism that the species can be successfully recovered,” said Jeff Corcoran, supervisor at the black-footed ferret reintroduction site. “However, continued monitoring of the population is critical.”

The record-breaking news comes in the same year as the 30th anniversary of the discovery of the last 129 black-footed ferrets in the world and the 15th anniversary of Aubrey Valley being selected as a reintroduction site.

Following the discovery of the last remaining black-footed ferrets in Meeteetse, Wyo., disease outbreak left a mere 18. Those last 18 were captured and captive breeding efforts began in 1985.

In Arizona, the reintroduction effort is funded primarily through the Heritage Fund, and is dependent on volunteer involvement.

“All the ferrets we have today are offspring from those last 18,” Corcoran said. “The fact that we now have a self-sustaining population in Aubrey Valley is a testament to the dedication of Game and Fish personnel and the volunteers. The volunteers play such a critical role in the collection of data.

“It’s no easy task bringing an animal back from the brink of extinction. Without the volunteers and the Heritage Fund, I’m not convinced any of this would have been possible. It’s not easy work, but it is rewarding.”

While the numbers are encouraging, Corcoran believes it is important people understand the difficulty in bringing this animal back from near extinction.

“They have a short life span in the wild and feed primarily on one species: prairie dogs,” he explained. “One disease outbreak can severely impact the population and put us back at square one. That’s why these spotlighting efforts are so critical to the recovery of this animal. If there’s ever a problem, we’ll know quickly and be able to manage the situation.”

For those interested in participating in a future spotlighting effort, contact the ferret field station at azferret@azgfd.govwith “Spotlighting” in the subject line.