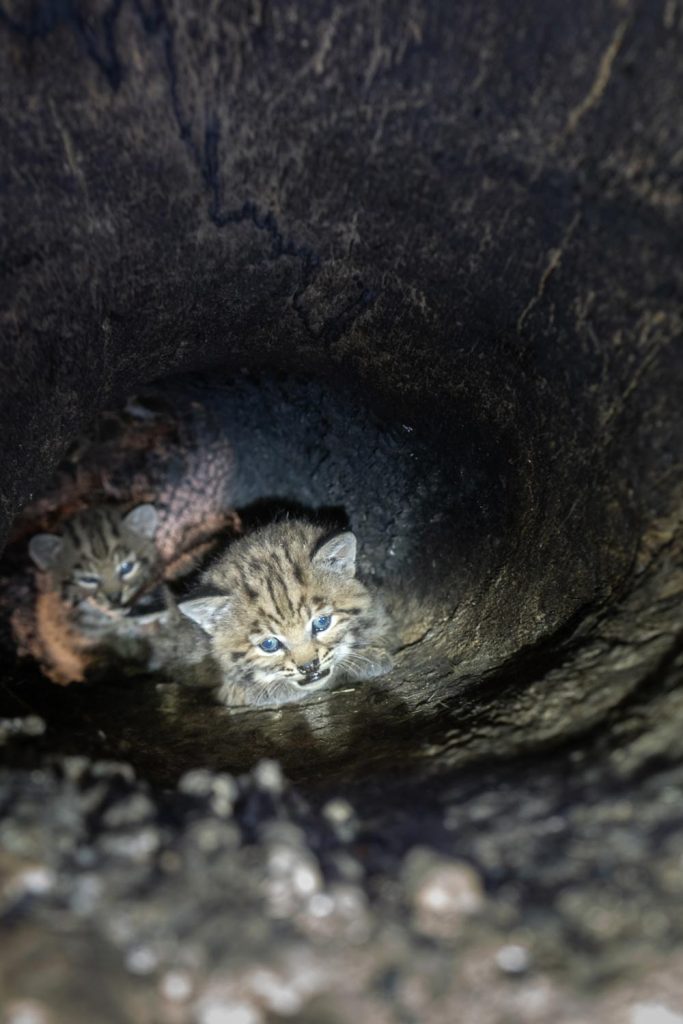 THOUSAND OAKS, Calif.— A bobcat captured and collared more than a year after the Woolsey Fire gave birth to three kittens recently – B-379, B-380, and B-381, according to the National Park Service.

Using VHF radiotelemetry and GPS points from the mother’s (B-370) collar, National Park Service biologists located the female bobcat in a cavity of a large oak tree on April 15, 2021. She was in an area that was intensely burned during the Woolsey Fire that swept through Calabasas and other areas in the Santa Monica Mountains in November 2018.

Since 1996, biologists at Santa Monica Mountains National Recreation Area (SMMNRA) have been studying the ecology and conservation of bobcats in and around the park to learn more about how they persist in an urban landscape.

Last month, biologists suspected that B-370 was “denning” because she repeatedly returned to the same spot, an indication that a female has likely given birth. However, when they arrived on-site, they had trouble locating the den because it wasn’t in a typical location.

“I swear she’s in this tree, but I can’t find her,” biologist Joanne Moriarty recalls saying into her hand-held radio to another biologist nearby. “Then I look up into this little tiny hole in the tree, and her face is just poking out at me. Of course, she’s been staring at me the whole time. I just happened to be in the right spot.”

On this occasion, Moriarty used a remote camera held on an extension pole to peek into the tree to confirm the presence of a bobcat and three kittens. The biologists then left the area and returned the following day while the mother was away from her den, presumably hunting.

Using a ladder, biologists captured the kittens, one by one, and brought them down safely. The kittens were weighed, measured, and given a general health check by researchers. They were also ear-tagged for the purpose of future identification before being returned to their tree cavity home.

Moriarty has been studying bobcats in the area for 17 years, and she says what is striking about this den is its location. Dens are often in hollow areas found in thick brush, specifically in chaparral or coastal sage scrub vegetation. The second most common location for bobcat dens is in woodrat nests, the large piles of sticks and leaves that woodrats build and live in for generations.

Denning in a tree is unusual, she said. Scientists believe the bobcat used the tree cavity as a den because much of the existing natural habitat in the surrounding area was destroyed after the Woolsey Fire. Very little vegetation has grown since the devastating fire destroyed close to half of the natural area in the Santa Monica Mountains and about 2/3 of the natural habitat in the Simi Hills.

B-370 was initially captured in the Simi Hills. When captured, biologists noted that she appeared to have nursed in the past. They took hair and tissue samples and fitted her with a radio collar so her movements could be tracked. She was then released.

An average bobcat litter size is two to three kittens. The sex ratio overall in litters are generally split, 50/50 male and female. B-370’s litter had one female and two males. These kittens weighed in at 500-600kg, and they were about 30 days old.

Bobcat kittens typically stay in the natal den for four to five weeks, then the family will move on to other dens that they use for shorter periods. Researchers are not sure why they do this, but they speculate that it’s likely an anti-predator behavior. The mother will typically also keep them in dens until they are 12 weeks of age, and then at that point, they will follow her as she hunts and goes about her day.

The mother cares for the kittens, in general, until they are nine to 11 months of age. They then slowly become independent, but they will still occasionally check in with her every so often.

Between October and February, researchers generally employ from 6 to 12 traps to monitor the population by capturing, tagging, and radio-collaring animals. Trapping ceases in late winter because female bobcats give birth in early spring and care for their young.

The bobcat trapping season ended earlier this year, in February, with three new bobcats captured. B-370 lives in the southeast end of the Simi Hills, and biologists are also tracking a bobcat (B373) in the Santa Clarita area as part of a project evaluating the effects of the 5 Freeway.