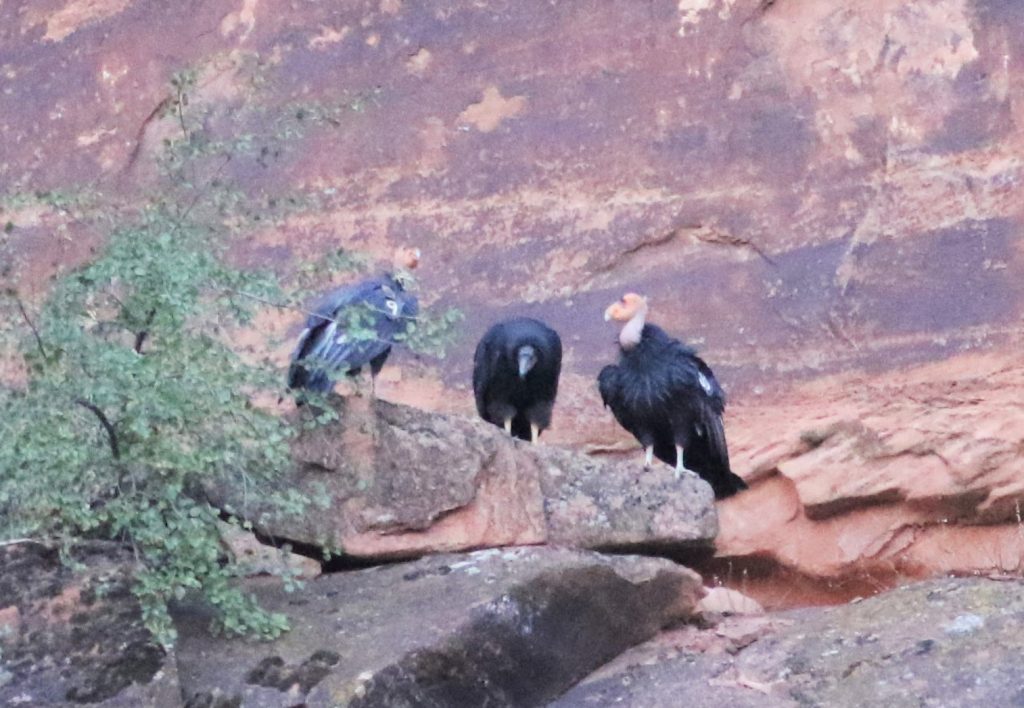 SPRINGDALE, UT – Condor chick #1000 has set another milestone for the California Condor Recovery Program. On September 25, 2019, chick #1000 took its first flight from its nest cave in Zion National Park, becoming the first wild-hatched chick to successfully fledge within Zion National Park since recovery efforts began in the late 1990’s and likely the first in Zion in over one hundred years. Chick #1000 or “1K” is also known as Zion’s Centennial Chick since 2019 marks the 100th anniversary of Zion National Park.

Two park visitors witnessed the chick’s first flight and immediately reported the news to National Park Service staff who confirmed the good news. Although the chick’s first flight was described as “ungraceful,” it nonetheless managed to safely land. The chick is doing well and is being tended to by both parents, condors 409 (mother) and 523 (father).

Park rangers and volunteers are keeping a close eye on chick #1000 since it left the nest cave and are regularly observing the chick flapping its long wings. This flapping-of-the-wings exercise routine will help the chick build muscles so future flights are more graceful than its first. Although most condors take their first flights when they are about 6 months old, chick #1000 fledged at 4.5 months, which is still within the observed age range of a fledged condor. The chick will continue to be dependent on its parents for the next 12-14 months. Because the adults spend so much time caring for their young, wild condor pairs normally produce one egg every other year.

Currently 96 condors are flying free in northern Arizona and southern Utah thanks to the tireless efforts of numerous non-profit organizations, zoos, and federal, state, and tribal agencies that form the Southwest Condor Working Group and to the voluntary efforts of hunters participating in Arizona and Utah’s lead ammunition reduction programs.

“We are absolutely thrilled that #1000 is doing so well,” Russell Norvell, the Avian Conservation Program Coordinator for the Utah Division of Wildlife Resources, said. “Along with our partners in this effort, we are always happy to see success in the conservation work with this endangered species. Each individual is valued and this success showcases our progress helping California condors recover.”  Park officials want to remind rock climbers that all routes on the east face of Angels Landing remain closed until further notice due to condor activity. For more information on cliff closures, please visit https://www.nps.gov/zion/planyourvisit/climbing.htm