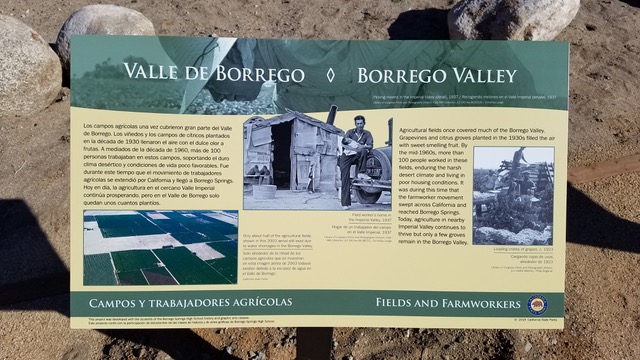 SACRAMENTO, Calif.— California State Parks invites the public to virtually commemorate the contributions of prominent civil rights, union and farm labor leader César Chávez made at Borrego Springs (San Diego County) in 1966. In partnership with Borrego Springs High School students, State Parks will be unveiling four interpretive bilingual panels at Anza-Borrego Desert State Park® that will display how César Chávez supported local farm workers who wanted the National Farm Workers Association as their union. The ceremony will be hosted on the Facebook pages of State Parks and Anza-Borrego Desert SP from 10 to 11 a.m. on Wednesday, March 31.

“My father knew there were countless men and women who made tremendous sacrifices and achieved great things, but whose names are largely unknown now,” said Paul F. Chavez, president of the César Chávez Foundation. “Borrego Springs is a little-known chapter in a more famous chronicle. But it and the heroic people who took part in those events should not be forgotten. We hope today’s observance will help keep their legacy alive.”

Between 2017 and 2018, more than 60 students from digital media and history classes at Borrego Springs High School, a Title I school, collaborated with project leaders at Anza-Borrego Desert SP on an interpretive panel project to tell the story of how after César Chávez and union organizers were told they could not camp at Christmas Circle Community Park in the center of Borrego Springs in June 1966, they camped at Borrego Palm Canyon Campground at Anza-Borrego Desert SP. Despite pressure from local businessmen to evict them from the park campground, Wes Cater, then supervisor for Anza-Borrego Desert SP, continued to allow the group to stay at the campground, recognizing that parks are for everyone. The interpretive panel project provided an opportunity for the high school students to learn about California’s rich history and culture and introduce them to careers in California’s State Parks System.

“Our State Park System is filled with stories of people fighting for justice and equity,” said California State Parks Director Armando Quintero. “A special thanks to the Borrego Springs High School students for bringing the struggles of César Chávez and union organizers to light. This is a reminder to all of us, that parks are treasures of natural resources, cultural resources, history and that parks themselves are a part of those stories. Parks are about everyone’s story, including yours.”

Panel Discussion with Individuals Present with César Chávez in 1966

After the virtual ceremony, State Parks and Anza-Borrego Desert SP will post an interpretive “tour” of locations around Borrego Springs where events occurred. The tour will be prerecorded with high school students in the Certified Interpretive Guide class presenting at each location.