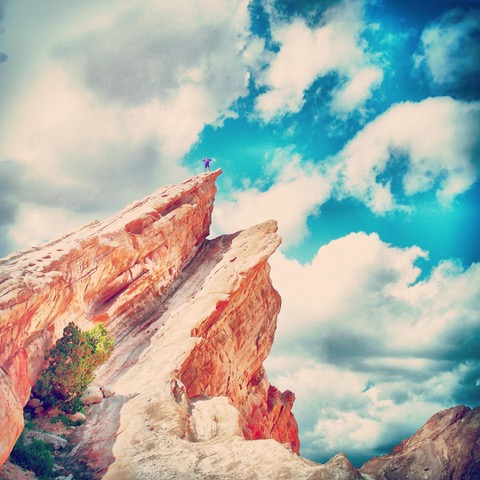 The destination that sits just 45 miles north of downtown Los Angeles can feel otherworldly. Clear skies allow one to become awestruck by a blanket of stars that remains hidden from most of the greater Los Angeles basin. By night, Vasquez Rocks is mystical and magical. During the day, it begs for adventure and outdoor enthusiast heed the calling. 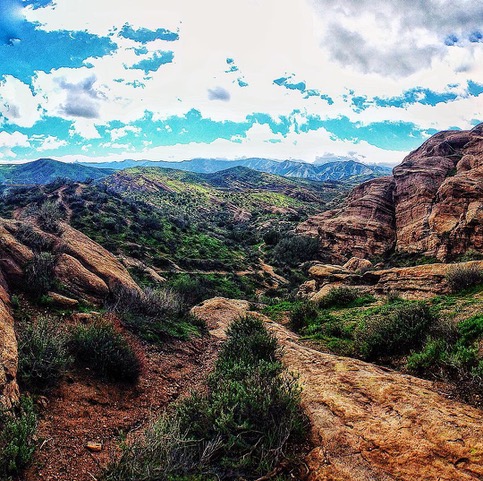 They hike and picnic on the grounds, and swim in the waterway. And, the rocks – the 932 incredible rock formations that jet up from the earth – these wonders offer chances for climbing and admiring the miracle of nature. While the rocks are the obvious draw of the Vasquez Rocks Natural Area Park, the terrain is also valued for it’s diverse wildlife and fauna.

The History of Vasquez Rocks

Not only are the rocks stunning, they have stories to tell. It can seem hard to believe that the formations at Vasquez Rocks Natural Area Park jetted up from the ground 25 million years ago. Two tectonic plates (the North American and Pacific) collided and caused an earthquake, which moved the earth upward. Time and erosion then created the magnificent natural structures we get to gaze at today. 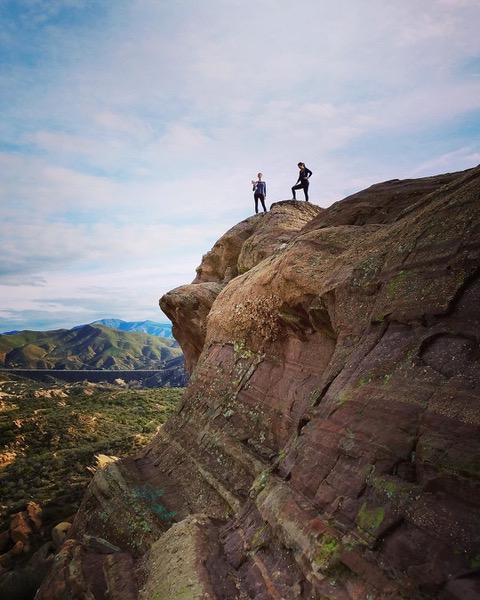 How did the rocks get their name? In 1874, a criminal by the name of Tiburcio Vasquez was wanted for murder after a saloon brawl turned bad. On the run, he made his way hijacking wagons and robbing people. He did some time in San Quentin but escaped, becoming one of the most notorious and wanted bandits in the history of California. Many actually called him “The Scourge of California,” and they looked to once and for all capture the man who we later discovered made his hideout in the Vasquez Rocks caves.

Things to Do at Vasquez Rocks

When you get to the Vasquez Rocks Natural Area Park, make your way to the Interpretive Center first if you want to learn more about how the rocks were formed, or just cool off on a hot day. The center shows kid-friendly movies on the rock formations and it offers background on some of the animals that call the area home.

Take note that there’s only one drinking fountain in the entire park area, so you may want to fill up your water bottle there before you head out for a walk or hike. At the center, grab a guide book so you can have an explanation of all trail markers. 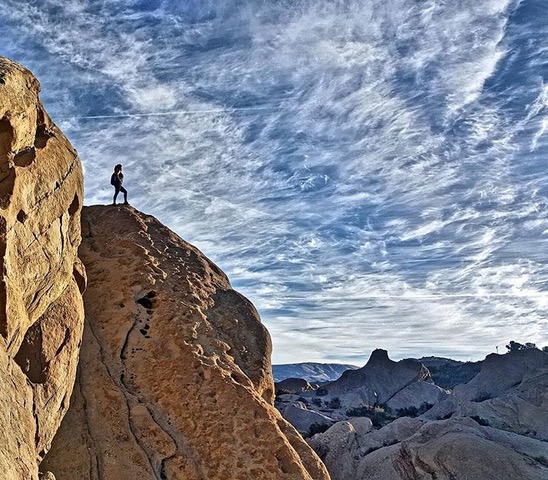 The Vasquez Rocks Natural Area Park is ripe for exploration. There are low sloping rocks that little kids can play on and huge steep ones that are best left to the older and more agile. Trails wind all over the park, but you don’t have to stay on them. Some find adventuring more fun when given free range to uncover every inch of the area.

There are picnic benches scattered about, in the sandy dirt and in the brush. A “secret” cave lies hidden off of the main road, and you won’t find a legitimate trail leading to it so keep an eye out for it or ask for navigation tips when you’re at the Interpretive Center.

If you were to hike all the way through the trails at Vasquez Rocks, you would cover 3.4 miles. This is some fascinating terrain, but not everyone is up for a journey of this length. Pick a trail or two and just go exploring. You’ll view some outstanding signs of the earthquake that occurred long ago, including folded and twisted rocks that the San Andreas Fault seems to have had its way with. 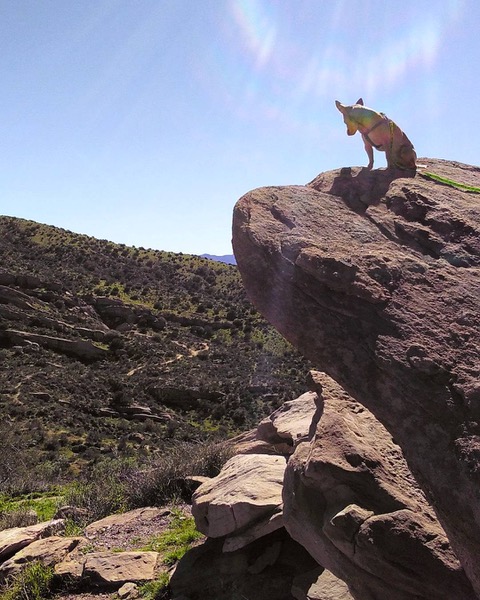 Much of the area is still recovering from a wild fire that occurred in 2007. Water erosion is evident, as some of the rocks are in strange shapes that could not have happened simply because of an earth tremor.

Beautifully mild, moderate and exceptionally challenging hikes are yours for the taking. Just about anyone can hike here, and those who are able especially love going off-trail to shimmy through canyons and hoist themselves over incredibly large rocks.

The typical plan is to start a hike in Vasquez rocks at the park’s north end. You should drive down the dirt road that begins there and then pass the first little parking spot, which is close to the ranger’s station. Instead, you’ll want to park in the larger spillover lot that’s in the middle of the park. You could keep going and leave your car in the main lot, but starting a hike in the middle makes it easy to make a complete loop around all the trails. 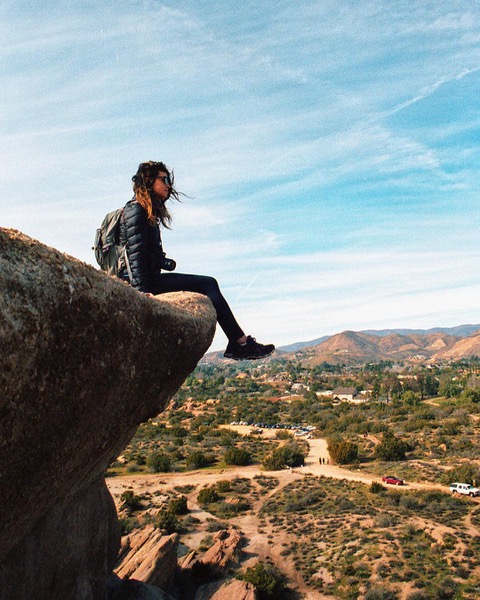 As you leave the lot and set out toward the trail, you’ll notice a bulletin board on your east side that has a park map as well as some pamphlets showing sights to look for while hiking. Grab a brochure, if you like, and then find the sign that points to the Pacific Crest Trail. A quick footpath leads you to the Pacific Crest Trail and back to where you first drove into the park. Hiking in Vasquez Rocks is a treat because each time you visit, you can have a new experience with fresh sights and sounds (and other sensations) to uncover.

Vasquez Rocks in the Movies

If you live in Los Angeles, you probably get used to seeing movie sets out and about town and in some of the region’s mountainous areas. Vasquez Parks isn’t out of the loop when it comes to being immersed in a Hollywood lifestyle. The park has been a backdrop for many cinematic adventures, including those in The Flintstones, Bill and Ted’s Excellent Adventures and Austin Powers. It was even used in Star Trek to portray Dr. Spock’s home planet. 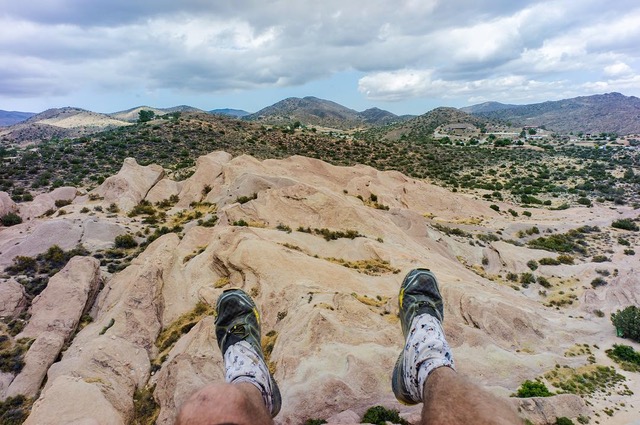 What to Bring to Vasquez Rocks

The weather and conditions in Vasquez Rocks Natural Area Park will differ throughout the year, depending on when you visit. But, it’s safe to say that when you visit, you should bring:

As of the date of this publication, Vasquez Rocks Natural Area Park states on its website that it offers Ranger Guided Hikes (weather permitting) from January to June, and from October to December. The hikes are appropriate for all ages and are free. They take place from 11 a.m. to 12 p.m. on select days. Contact the Ranger’s Office for more information.