Join filmmaker John McDonald for a moderate 2.2-mile round trip hike to Ghost Mountain. Learn about the family that lived there for 17 years and how John’s production team captured the amazing story that attracted Huell Howser to the project. There will be frequent stops along the trail to discuss points of interest and to share archival and production photos.

Meet: At the entrance to Blair Valley and then caravan to the South Home/Ghost Mountain trailhead. Hike ends at 11AM. Bring plenty of water, snacks and appropriate clothing including sun protection. The desert is still quite warm in October. Please be prepared to be hiking under the full force of the sun.

This hike is offered in conjunction with a screening of a lost episode of “California’s Gold,” The Ghost Mountain Experiment, hosted by the late Huell Howser and filmed in Anza-Borrego Desert State Park. The film screening will be held at the Borrego Springs Performing Arts Center at 7pm on October 18.

Tickets are $10 each
Doors Open at 6:30 p.m.
There will also be a Hike to Ghost Mountain, details here. 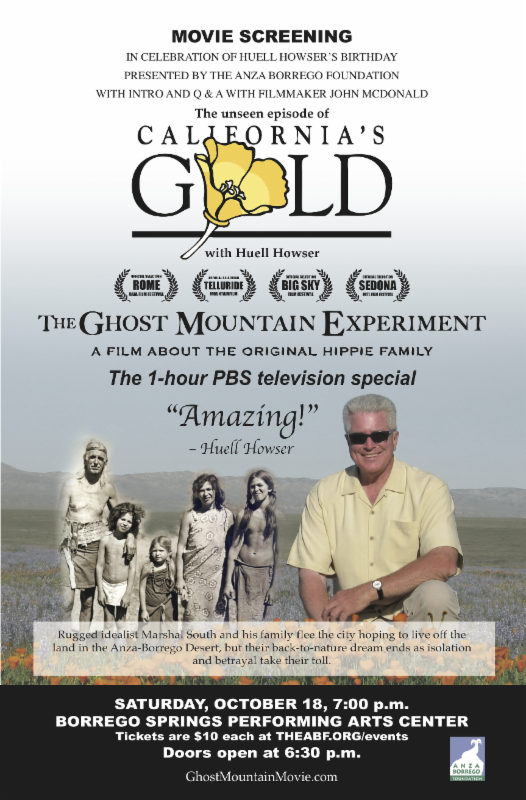 ABF is proud to present a screening of an unseen episode of California’s Gold – The Ghost Mountain Experiment, hosted by the late Huell Howser and filmed in Anza-Borrego Desert State Park. To coincide with what would have been Huell’s 69th birthday, this one-hour episode will be shown on Saturday, October 18, at 7 p.m. at the Borrego Springs Performing Arts Center. Filmmaker John McDonald will host a Q&A with other guests following the screening.

Back in 2010, Huell saw McDonald’s documentary The Ghost Mountain Experiment, the story of the “original hippie family.” Obsessed with the dream of living a simple back-to-nature lifestyle, the eccentric artist, environmentalist and author Marshal South flees civilization in 1930 with his wife Tanya. For 17 years, they raise a family on a remote, waterless mountaintop in the Blair Valley area of Anza-Borrego Desert State Park.

Huell Howser traveled all over our state in search of its history, its natural wonders, its diversity and most importantly its rich human stories – all the things that make California such a special place to live. Howser & McDonald collaborated in telling this quintessential California story of the South Family through an episode of California’s Gold.

John McDonald, an Emmy Award-winning documentary filmmaker, first became fascinated with Marshal South in 1980, during which he and his wife visited the crumbling Ghost Mountain homestead on a camping trip. In 2004, just after joining Anza-Borrego Foundation, the McDonalds met South biographer Diana Lindsay on an ABF field trip to the South’s former home and were inspired to document the family’s story.

Copies of the episode will be available for purchase at the screening.