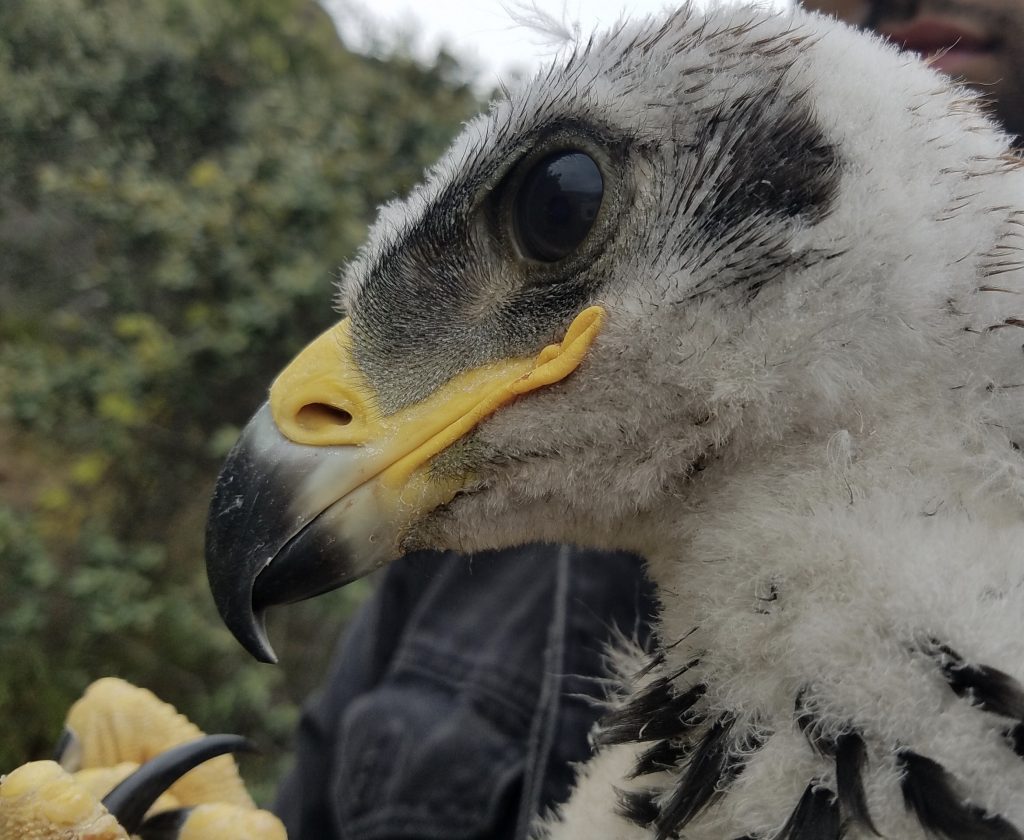 THOUSAND OAKS, Calif – A pair of golden eagle chicks, a fully protected species in the state of California, have been found in a nest in a remote area of the western Santa Monica Mountains. For photos, click here.

The last time a nest was confirmed was in the mountains in the late 1980s near Lobo Canyon, in the central portion of the mountain range.

The chicks, a 12-week-old male and a female, were located several weeks ago when a consultant conducting bird surveys on private property identified the golden eagle pair and notified park biologists. NPS biologists working with biologists from the U.S. Geological Survey and Bloom Biological Inc., confirmed the nest location and activity and banded them in early May.

Each chick received two bands – one colored and one numbered. The bands are part of the USGS Bird Banding Laboratory to help scientists monitor the status, trends and ecology of resident and migratory bird populations. Biologists also took blood from the chicks for genetic testing.

Loss of habitat for nesting and hunting has reduced their range in much of the state, according to Katy Delaney, an ecologist with Santa Monica Mountains Recreation Area, a unit of the National Park Service.

Delaney says she worries about these majestic raptors.

“Humans are the greatest threat to golden eagles,” Delaney said. “In the past, they were trapped and shot throughout their range and today, they are vulnerable to habitat loss. Like their mammalian carnivore counterparts, they can die from eating poisoned prey as well as from lead poisoning, electrocution on power lines and collisions with wind turbines.”

“We haven’t seen them in so many years, though they could have been around and staying away from people.” Delaney said. “We just went through a huge fire and drought, and we’re also not going to see a decrease in urban development. Nonetheless, this is a good thing for our mountains. We not only have mountain lions here, but we have golden eagles, too.”

Although the chicks recently left the nest, their parents are not total empty nesters, yet. For the next several months, they will continue to rely on the more experienced birds until they learn to successfully hunt on their own, which may be around late fall.

These birds of prey typically feed on rabbits and squirrels, but also take a diverse array of prey species from small birds and snakes up to mule deer fawns and coyote pups. Carrion is also an important component of their diet. In the case of this family, western gulls was the prey item of choice at the time of banding. There were seven gull wings found in the nest, located in a large cave.

Interestingly, golden eagles are thought to form strong pair bonds and exhibit high mate and territory fidelity, meaning they will likely stay with the same partner and return to the same nest each breeding season. Some Southern California adults remain on or close to their nest territory throughout the year while others move great distances several counties away. After gaining independence, young eagles generally disperse out of their parent’s breeding territory travelling between 20 to 1,200 miles away, but usually return when they are four to five years of age to establish their own nesting territory.

The golden eagle, one of the largest birds in North America, is a cousin of the bald eagle. Sightings are extremely rare and both are protected under the Migratory Bird Treaty Act and the Bald and Golden Eagle Protection Act. Biologists believe the population may be declining in the United States, especially in California.

A nesting pair was observed north of the 101 Freeway in the Simi HIlls at Cheeseboro Canyon in the 1990s but nesting has not been detected in the Santa Monica Mountains since the 1980s. A survey of the mountains in the 2000s did not yield any active golden eagle nests.