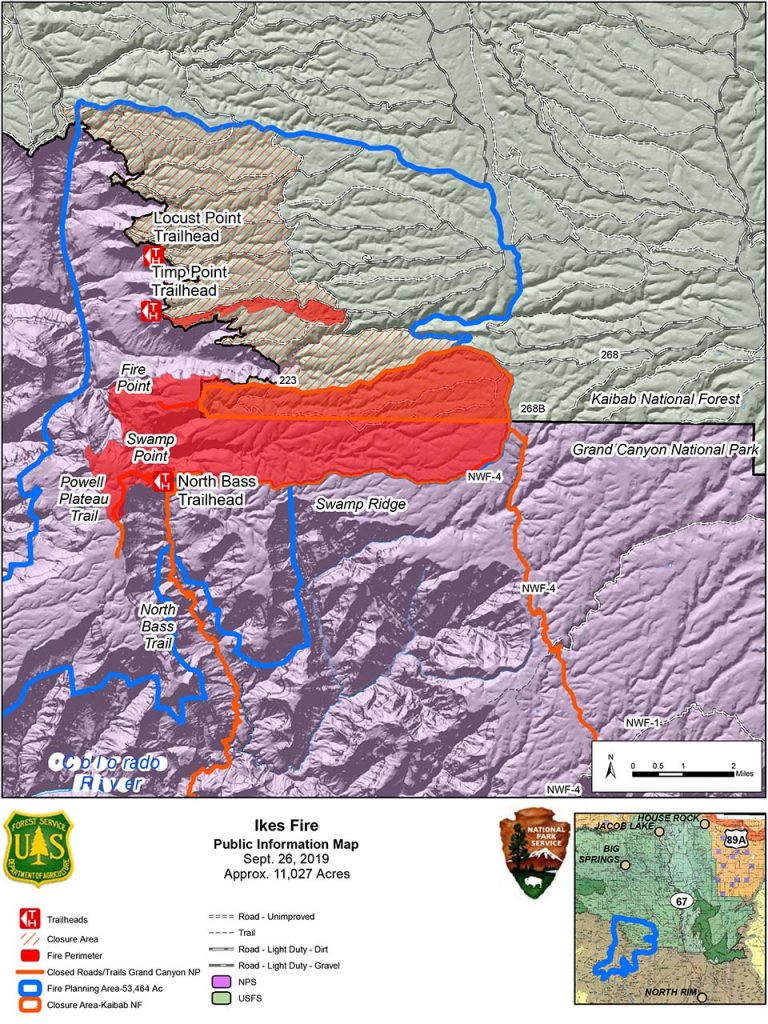 Grand Canyon, AZ – In an effort to stop the Ikes Fire’s progression to the north, fire managers will utilize helicopter bucket drops in Quaking Aspen Canyon. The 11,000-acre lightning caused wildfire which is located on the North Rim of Grand Canyon National Park and the North Kaibab Ranger District of the Kaibab National Forest became active last week during a wind event that produced wind gusts to 45 mph.

Additional resources including two heavy-lift helicopters have been brought in to assist with the firefighting efforts. The helicopters will utilize water from the Colorado River to drop on the fire to halt its spread ahead of another wind event forecasted to impact the area starting Friday and lasting through the weekend and into next week.

The majority of efforts will be focused on the northwestern edge of the fire’s perimeter below the rim located in the Grand Canyon National Park. The goal is to reduce the potential for fire, that is currently burning in drainages below the Rainbow Rim trail, to burn onto the rim and into the Kaibab National Forest. Fire managers will continue to evaluate safe and effective options and strategies to limit or stop fire spread.

To ensure public and firefighter safety, the temporary closure area of the Ikes Fire on the North Kaibab Ranger District will be expanded to include the roads, trails and viewpoints in the Rainbow Rim Trail area. Areas in the expanded closure include:

Highway 67 and the North Rim Village, North Rim Lodge and businesses are open. However, some road and trail closures are in effect for the Ikes Fire area within Grand Canyon National Park. Due to the fire change, the following roads and trails are closed on the North Rim:

Smoke from the Ikes Fire, along with other wildfires in the area, will be visible and may cause impacts. Visitors traveling to the area should be aware of possible smoke along Highway 67. Visitors are asked to drive carefully and turn headlights on for safety. For local air quality and related information, please visit the following websites: https://www.airnow.gov/ or the Smoke Management Division of the Arizona Department of Environmental Quality at https://azdeq.gov/SmokeManagemet

More information can be found at InciWeb at https://inciweb.nwcg.gov/incident/6475/. Visit www.nps.gov/grca/learn/management/firemanagement.htm for additional information about wildland fire at Grand Canyon National Park.