California has the distinction of being the entertainment capital of the world with many films being produced all over the state, of course the Mojave Desert has had its share of filming.  Every time you see a Joshua Tree in a movie, music video or a television commercial it was filmed in or very near the Mojave Desert.  One of those movies titled “It’s a Mad Mad Mad Mad World” used many Southern California locations from the mountains above Palm Desert on the Palms to Pines Highway (Hwy. 74), they also filmed at locations throughout the Coachella Valley to the Yucca Valley area of the Mojave Desert all the way to Santa Monica.  It’s a Mad, Mad, Mad, Mad World is a 1963 American comedy film directed by Stanley Kramer about the madcap pursuit of $350,000 in stolen cash by a diverse and colorful group of strangers, this comedy premiered on November 7, 1963. 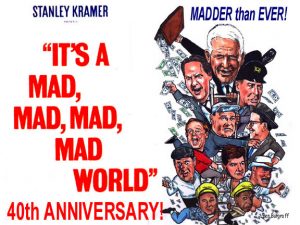 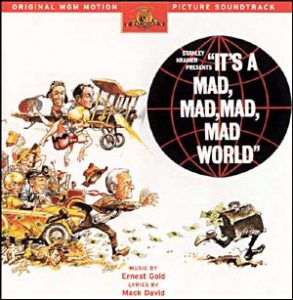 In today’s Mojo on the Mojave we will explore the Mojave Desert aspect of this film through pictures.  Before and after pictures are rather interesting to many people and you will see many pictures taken today compared with movie scenes from 1963.  Six of the picture comparisons that you will see are in the Yucca Valley area of the Mojave Desert with four picture comparisons being in the Coachella Valley area.  Look for differences in new buildings as well as in the desert shrubbery.  If a picture is worth a thousand words, sit back and enjoy this photo essay.

CLICK ON THE PICTURE, THEN AFTER IT LOADS CLICK ON IT AGAIN TO SEE IT FULL SIZE:

You might also be interested in “Final Frontiers on Film” about Trona Pinnacles, where the movie “The Final Frontier” was filmed.