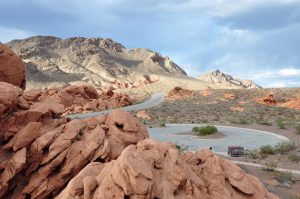 BOULDER CITY, Nevada –When people think of wilderness, they seldom think of houseboats, cars or four-wheelers, but at Lake Mead National Recreation Area, there is a way for visitors to experience the park’s wilderness areas using all of these modes of transportation.

Lake Mead is home to nine wilderness areas, all located in Nevada. They were designated in 2002 to preserve the undeveloped land, so each one retains its primitive character and influence. Part of that designation means that motorized vehicles and bicycles aren’t allowed in the wilderness areas.

Fortunately for enthusiasts who appreciate nature and a good four-wheel-drive experience or the comforts of home, most of Lake Mead NRA’s wilderness areas are bordered by roads and waterways where the restrictions don’t apply.

The park has just released six self-guided adventures that range from quick trips by car, to peaceful raft trips down the river to a four-wheel-drive backcountry trip to Lake Mead. All locations are just one to two hours from Las Vegas.

“We want people to explore these wilderness areas in ways that they like to recreate. We just ask that they do so respectfully, so that others may have similar experiences,” said Christie Vanover, park spokesperson.

Each Explore Map highlights a wilderness area in the park and describes what makes it unique, including its flora, fauna and geologic features. The maps also include seven leave no trace principles as guidelines to help protect the resource.

Redstone is located just off Northshore Road at mile marker 27. People can drive straight to the picnic area, park and hike the easy half-mile trail or climb among the red sandstone outcroppings and ancient lava flows.

“Redstone is our mini-version of Red Rock Canyon or Valley of Fire,” said Vanover. “The stunning pop of red geology is a ruby in the desert.”

Just north of Redstone at mile marker 30 is Boathouse Cove Road. It’s a 9.1-mile backcountry road that splits Pinto Valley Wilderness and Jimbilnan Wilderness areas and leads to Lake Mead. There are two primitive campsites along the route.

The first mile of the unpaved road has small rocks and is easily accessible with a high-clearance vehicle, but after that, the rocks turn to boulders and four-wheel-drive is needed.

Lake Mead Houseboat
For those who prefer the comforts of home like satellite TV, a full kitchen, hot tubs and a soft bed, Forever Resorts rents houseboats on both Lake Mead and Lake Mohave. Renters can observe the wilderness views along the Nevada shorelines, or they can pull the boat up to a beach and take a hike for the day.

Another way to experience the wilderness by water is along the Black Canyon Water Trail. Visitors can bring their own paddle craft or rent one from an authorized outfitter. Permitted businesses also offer guided raft, canoe and kayak trips from the base of the Hoover Dam down the river.

The final two Explore Maps are located in the Mohave District and offer a unique a look into human history.

At Grapevine Canyon, visitors can walk a short distance from the parking area to see petroglyphs etched into large boulders. At Pipe Spring, visitors can park at the end of the road and hike through granite and metamorphic rock that is about 1.5 billion years old.

“Both of these areas play a prominent role in the religion and mythology of the Yuman tribes of the lower Colorado River, so like all areas of the park, we ask that you enjoy these rare sites with respect,” said Vanover.

Grapevine Canyon and Pipe Spring should be accessed from the south off Highway 163. They are also accessible from US 93, but that route has been damaged by recent storms and requires a four-wheel-drive high-clearance vehicle.

All of the Explore Maps can be downloaded from the park’s website at https://www.nps.gov/lake/planyourvisit/explore.htm.