It was the day after Thanksgiving (2010).  My wife and I were driving back from Mt. Baldy in the Angeles National Forest.  We thought there would be more snow up there then there was and so as quickly as we had gotten up there, we were on our way down.  As a side-note, the road to the Mt. Baldy ski area has some of the most steep and blind switch backs we have experienced.

I was driving and we were on Glendora Ridge Road coming back through the valley on the way to the 210.

No music was playing and when Joanie broke the silence by saying, “did you see that?”.  Of course, I did not see anything and I kept going.  She said she thought she saw either a bobcat or mountain lion.  This was hard for me to swallow because both are very rare sightings and so far; in the years we have been in California, we have not seen either.  Plus, how could I have missed something so big; we aren’t talking about a lizard or a rabbit.

I  turned the truck around.  We slowly drove along the shoulder, Joanie pointing at the bobcat.  I still did not see anything and to my regret did not tell wifey to grab my camera.  Maybe this was because I did not see what she was talking about nor did I actually expect to see what Joanie was claiming to have seen.  Not having the camera out and ready would be a critical mistake.

Finally, I saw “something” and then saw that “something” move.  I saw the “something” was a big furry animal.  At this point, I screamed out for Joanie to get the camera; which was still in the bag on the back seat. By the time the camera was in my hand, turned on, lens unlocked and pointing, “something” was already on its way from looking straight at us to showing its butt as it was strongly contemplating jumping behind the wall on which the animal stood.

A couple of pictures were hastily grabbed as the “something” jumped behind the wall.  It happened so fast, as is normally the case in these situations.  Remarkably, the animal jumped back onto the wall.  As I was sort of mesmerized by the sight of the wild animal, during the precious few seconds when I should have been snapping photos, I watched it, but did not move; I felt like I could not move.  The animal then jumped back behind the wall.  This time, for good.  A once in a lifetime moment blown and reduced to the image of a bobcat’s butt.

Frustrated at myself, I got out of the car and walked toward the wall with my camera.  There was a steep wooded drop-off on its other side.  Nothing could be seen or heard.  I tossed a few rocks into the rough to see if maybe there would be a reaction by the bobcat, but there was none.  The only evidence of him having been there were some droppings on the wall and this mediocre photograph. 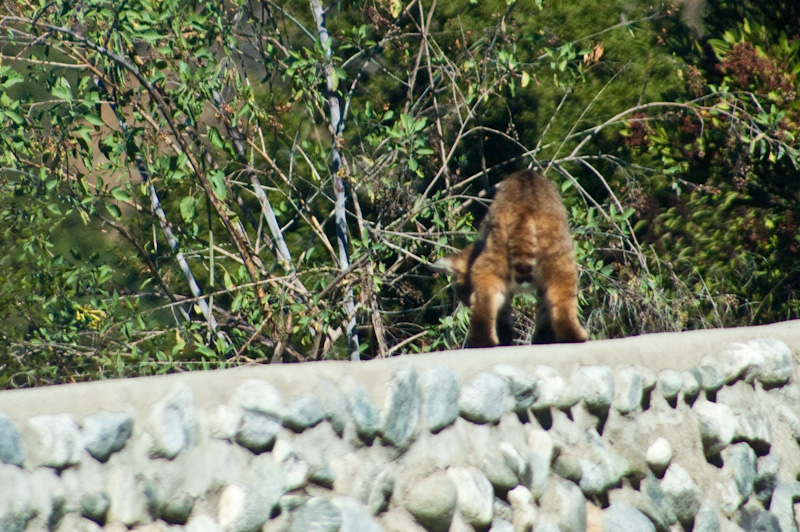