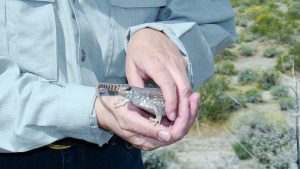 Reptiles get a bad wrap.  Slimy, unsavory characters are branded ‘reptiles,’ even though as a rule reptiles are not slimy.  Certain occupations are put in the reptile category, presumably referring to their cold-bloodedness.  And since I’m from Las Vegas, what about the term ‘lounge lizard’?  This refers to guys who hang out in bars.  The only reasoning I can think of for this analogy is the picture of wild lizards hanging out in the sun, warming up their normally cold blood.   And while observing lounge lizards in the casinos might be fun, I’d like to recommend that you try lizard watching in the desert.

Lizards are fascinating creatures.  Although they live in many environments worldwide, they are very often associated with the desert southwest.  Most are insect-eaters, but they live in a variety of habitats, from riparian areas to woodlands and of course, extreme desert.  They come in a variety of shapes, sizes, and colorations.  One thing most of them have in common is the ability to lose their tails if captured.  Just about every kid who has grown up in the desert is familiar with this.  Lizard tails can break off at a natural weak point, which leaves the predator with a twitching morsel, while the lizard makes a clean, if somewhat damaged escape.  Most species can regenerate the missing tail piece, but it’s never quite the same. 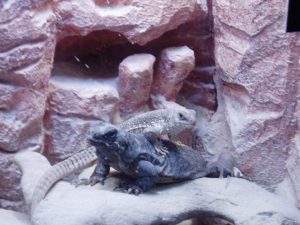 Lizards can be seen sunning themselves on rocks, especially in the spring when they emerge from brumation (reptilian hibernation).  What people don’t know is that even though they love the heat, they are still vulnerable to overheating in extreme temperatures.  Cold-blooded animals need to be able to regulate their body temperature.  Wildlife biologists do their reptile surveys when temperatures are amenable, between 60 and 85 degrees, usually at night, when most of these animals are active.  Similarly, reptiles don’t like to come out when it’s cloudy or windy.  Bear these things in mind when you set out to observe your favorite lizards.

Here’s a summary of some of the favorite lizards to see in southern Nevada:

Common chuckwalla – The chuckwalla, or ‘chuck’ is one of the more interesting lizards.  It is quite large, with a body of around nine inches long, and appears to be fat.  Actually, it has a good amount of loose skin on the sides of its body, which allows it to inflate itself with air when threatened.  Chuckwallas usually slip into a rock crevice, then balloon themselves up so that predators cannot get them out.  Of course there are two predators that can puncture and deflate them – the badger and man.  Chucks are known for their variety of colorations.  Tan, brown, black and orange in varying patterns sometimes lead to confusion with Gila monsters.  Juveniles have strong banding on the tail.  See these lizards lounging on rocky outcrops, or you may be able to spot one in a rock crevice with the use of a mirror.

Desert iguana – Somewhat unlike its green, bearded tropical cousin, the desert iguana is rather bland-looking, grayish-white with brown to black netlike markings.  It has a small head and a long tail, almost twice its six-inch body.  They are found in low sandy flats, sometimes under creosote bushes.

Desert night lizard – A small lizard, four inches in total length, this night lizard has dark brown spots on a tan background, or can be uniformly tan.  Found at the southern edge of the Mojave desert, in chaparral and up into pine woodlands, they are usually under cover.  Take care when looking for them, as they easily lose their tails.

Gila monster – Sorry, folks, there’s a slim chance that you’ll ever see this reticent creature in the wild.  They spend over 90 % of their lives underground.  If you are lucky enough to see one, May is the most likely month for it.  They are also active at night during the summer.  Of course you can always go to the Springs Preserve to see a captive one.  Gila monsters are large, from 9 – 20 inches long, and very thick-bodied.   The banded subspecies, which is in southern Nevada, has black and orange mottled stripes on the entire body, and a very thick tail.  Gila monsters can survive for a year on the fat stored in the tail, and to lose it would mean certain death.  Their legs are short and their movement slow, but they quickly defend themselves with a tenacious bite and they are venomous, so do not handle them! It’s also illegal to do so.   These lizards are common at low to mid-elevations in the desert, where they prey on eggs and small animals.  Sometimes they are confused with western banded geckos or common chuckwallas.  You can find an identification guide at https://www.ndow.org/wild/concerns/safety/snake/NV_Ven_rept.pdf.

Gilbert’s skink – Skinks are different than most lizards, because they have smooth, overlapping, and equally-sized scales, which make for a shiny appearance.  They also have a hard exterior, with bony plates just under the scales.  Large for a skink, the Gilbert’s is about six and a half inches long and tan in color.  Head and tail are red or orange.  It is found in sage/pinion-juniper/pine habitats along riparian corridors, for example, high in the Spring Mountains.

Great Basin Collared lizard – A beautiful, medium-sized lizard about six inches long, this lizard has two black collars around its neck, separating a black-spotted gray head from a white-spotted khaki body.  They are usually seen basking on boulders, but are easily frightened.  If one is captured, it will bite.  These lizards have strong jaws and will even prey on other lizards.  The tail is sturdy and rarely lost.

Long-nosed leopard lizard – A medium-sized lizard, about six inches long with a tail twice as long, this is one of the most beautiful local lizards.  The back is covered with brown leopard-like spots along with yellowish horizontal lines.  The tail is striped, but more densely than the zebra-tailed lizard.  Females develop orange spots on their sides during breeding season.  Mostly found in low, flat desert areas, leopard lizards are known to run to nearby cover and ‘freeze’ motionless.

Long-tailed brush lizard – The brush lizard is very small, only two inches in length, with a very long tail.  Gray or light brown in color, it has a wide band of enlarged scales running lengthwise down its back.  It can be found in typical desert scrub, especially in the Lower Colorado River area.  These lizards prefer to camouflage themselves against shrub and tree branches, so don’t look on the ground for them.

Ornate tree lizard – Another small lizard, this one is two inches with a tail up to twice as long.   With distinctive brown and black splotches on the back, they appear darker when cold.  Southern Nevada is on the western edge of their range and they can be found on riparian slopes as well as in urban settings.  These may be the ones that coined the term, ‘leaping lizards.’

Side-blotched lizard –  Another small lizard, about two inches with a tail about as long, the side-blotched is so named for a black blotch on each side of its body, just behind the front legs.  But the most striking part of this lizard is the bright blue spots on the males.  It inhabits typical desert scrub and is very commonly seen basking or running between bushes.

Western banded gecko – Everyone loves geckos.  These little reptiles are different from regular lizards because their skin is thinner and more transparent.  To compensate for the greater evaporative loss, they prefer more humidity than most desert lizards.  Despite their delicate skin, they have a greater tolerance to heat.  They also have vertical pupils and functional eyelids.  Banded geckos emit a high-pitched squeak as their first defense strategy, but are also very quick to discard their tails.

Western fence lizard – These small, lizards are about four inches long with a tail one and a half times the body length. Keeled scales give them a spiny appearance.  Coloring can be gray to brown to black, with two lengthwise rows of darker scales on the back.  Males are known as “blue bellies.” Their habitat varies from to grassland sagebrush to woodland, sometimes at higher elevations.  They can live in urban habitats, and like to perch on elevated structures.

Western skink – Another glossy-looking skink, this one is small, with a body only about three and a half inches and a tail twice as long.  Brown with three lengthwise stripes in darker colors, the juveniles have a bright blue tail.  This skink, too, is found under cover high in the Spring Mountains.  It is also found in alpine meadows, grasslands, woodlands and riparian areas and extends into the Great Basin.

Western whiptail lizard – Aptly named, this is one of the fastest lizards around.  Its tail is extra-long, more than twice its four-inch body length.  The front half of its body appears dark, while the back half and tail are tan or golden brown.  This may be the lizard you are mostly likely to see around southern Nevada, because it is extremely common.  It is often seen darting under bushes.

Yellow-back spiny lizard – A fairly large lizard, about five inches with a tail as long, and a somewhat stout body, it is easy to recognize with spiny, or keeled, scales on its back.  Usually light yellow or tan in color, they have a black color phase when cold.  These lizards can be seen up to 5000 feet in elevation.

Zebra-tailed lizard – With a four-inch body and a tail as long, this is another of the fastest lizards in Nevada’s Mojave.  It is grayish-tan, with two rows of brown blotches and a very distinctive tail with ‘zebra-like’ stripes.  When pursued, it raises its tail to reveal even bolder stripes and runs on its hind legs.  Find it in gravelly areas along washes and smaller drainages.

I have to give credit to Polly Conrad, reptile biologist for the Nevada Department of Wildlife, who helped me with the information for this piece and is enthusiastic when it comes to educating the public about reptiles.  Conrad authored an entry in the new reference book entitled “Lizards of the American Southwest, A Photographic Field Guide,” edited by Jones and Lovich, 2009, Rio Nuevo Publishers.  This is a great source to find photographs of the lizards that I wasn’t able to include.  And Polly wouldn’t let me go without telling you about proper reptile etiquette.  Kids love to catch lizards, but they need to be careful so as not to make them drop their tails.  They should always release them afterwards.  Not only do wild lizards not make good pets, but there are laws regulating the collection of them.  Lizards are terrific animals to encounter in the wild, and hopefully there will be enough of them left for future generations to enjoy.

14 thoughts on “Looking for Lizards”