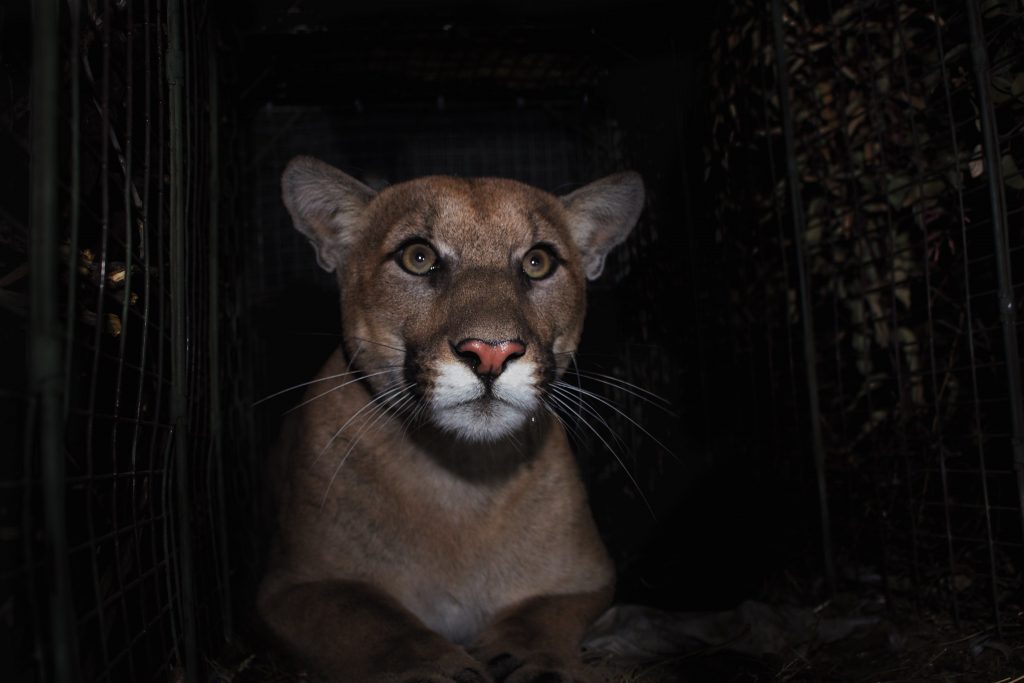 Mountain lion P-61 was captured in October of 2017 in the eastern end of the Santa Monica Mountains.
NPS Photo

THOUSAND OAKS, Calif. — At around 4 a.m. on Saturday, September 7, the mountain lion known as P-61 was struck and killed on the 405 Freeway in the Sepulveda Pass area. His final GPS point indicates that he was between Bel Air Crest Road and the Sepulveda Boulevard underpass. Today, his carcass was picked up and he will undergo a necropsy.

California Highway Patrol was initially alerted and moved P-61 out of traffic. City of Los Angeles Animal Control officers then retrieved his body and the radio-collar and notified both California Department of Fish and Wildlife personnel and our researchers here at Santa Monica Mountains National Recreation Area.

The four-year-old cat had crossed the massive 10-lane freeway near the Sepulveda Pass area on July 19, 2019.

“We’re not sure why P-61 decided to try and cross the 405 Freeway again,” said NPS biologist Jeff Sikich. “Based on his GPS points, he had been staying close to the eastern edge of the 405 more recently. Over the last few years, we and others have gotten remote camera photos of an uncollared male mountain lion that apparently lives in that area. A scuffle between the two could have caused P-61 to move back west.”

That was the first time during the course of the NPS’ 17-year study of mountain lions in and around the Santa Monica Mountains that a GPS-collared lion had successfully crossed this freeway. Young male P-18 was hit by a car in 2011 also in the Sepulveda Pass area, as was another uncollared male lion in 2009.

Since 2002, the National Park Service has been studying mountain lions in and around the Santa Monica Mountains to determine how they survive in an increasingly fragmented and urbanized environment.

The California Department of Fish and Wildlife is responsible for overseeing the management and conservation of mountain lions in the state.

Santa Monica Mountains National Recreation Area (SMMNRA) is the largest urban national park in the country, encompassing more than 150,000 acres of mountains and coastline in Ventura and Los Angeles counties. A unit of the National Park Service, it comprises a seamless network of local, state, and federal parks interwoven with private lands and communities. As one of only five Mediterranean ecosystems in the world, SMMNRA preserves the rich biological diversity of more than 450 animal species and 26 distinct plant communities. For more information, visit nps.gov/samo.