My one-year anniversary of living in the desert is July 10th.  Like many others who have bought foreclosures, I had some work to do on the house when I first moved in.  The stove and microwave were trashed, the thermostat smashed off of the wall, broken light bulbs and carpet burned with firecracker tracks.  The group of people that had a party here when the house was empty had a good time!  They even left their beer keg in the courtyard.

Now that I have finished phase 1 of my house cleanup I’m starting to work on the little courtyard that was empty and desolate when I first moved it. A friend of mine, who is a Feng Shui specialist, recommended that I put a water element out in the courtyard as it was located in my “career section” of the house. So I decided to create a garden with a water element.

The first challenge was figuring out how to water the plants that would be in that area.  After digging a hole I discovered that the courtyard was set-up with the black irrigation pipe.  It had been buried and the sprinklers removed and capped.   I just needed to uncap what was there and start planting.  That was easy enough. 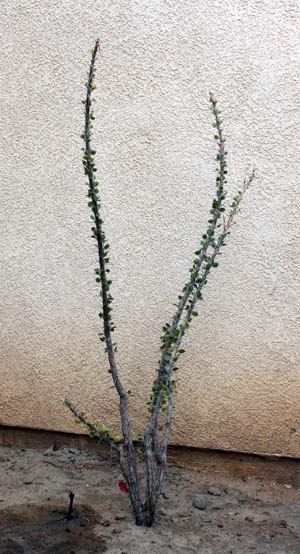 After several trips to Home Depot and Lowes I discovered that Lowes has better deals on plants and a sale area for plants that need to be revived a bit.  I found a couple small bougainvilleas for $1.25.  You can’t pass up a deal like that.  I also picked up a plant with purple flowers, also for $1.25.  Right next to the sale rack was a display of Ocotillos. I selected a smaller Ocotillo in pot with dirt.  It was $29.00 and had green leaves on it, so I decided to splurge and buy one.

With my track record of killing almost all of the plants that I had tried to plant thus far, I figured that the Ocotillo would be a sure bet as it is drought resistant and able to withstand the dry heat of the desert. After several earlier attempts at planting some herbs and other plants in my backyard, I figured drought resistant plants were the best choice for the courtyard project. I’m crossing my fingers that this one survives the location (and my black thumb) and grows into a healthy, flowering plant this spring.  I’ll keep you posted!

Coming soon . . . more on the other plants I selected and my water element!