Beatty, NV – Mountain Springs sculptor, David Berg, will install a major new kinetic sculpture at the remote Goldwell Open Air Museum in Rhyolite, NV on Saturday, June 18, 2011. Titled “Politician’s Compass,” the steel and wood construction will stand over 20 feet tall, with three, independently rotating arms moving at whim on the slightest breeze. David Berg, a longtime member of the Desert Sculptors, is a largely self-taught sculptor working in metal, who approached the Goldwell Board of Directors about possibly siting his sculpture at the Museum last year.

“We are approached with requests like this all the time, but given the historic integrity of the existing sculpture group, we are very careful about what we accept into the permanent collection,” said Executive Director, Suzanne Hackett-Morgan. “This seemed to fit.” 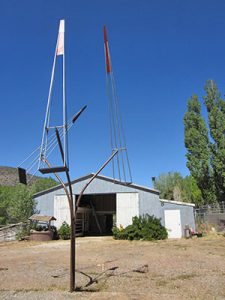 The Compass is the third new sculpture installed at the Museum since the work of the original artists, Albert Szukalski, Fred Bervoets, Dr. Hugo, Dre Peeters, and David\ Spicer, established the Museum in the late 20th Century. “Sit Here!,” a popular mosaic on concrete couch by Sophie Siegmann and Eames Demetrios’ “Rhyolite’s District of Shadows” Kymaerica plaque are the two other additions since 2006.

The Compass will stand where Spicer’s “Chained to the Earth” originally was placed. That stone sculpture, damaged irreparably over time by the elements, was deemed unsafe in 2009 and dismantled. It joined another sculpture that had withstood the test of time since 1989, Szukalski’s “Desert Flower,” which was destroyed by a windstorm in 2008.

“In this legislative year of 2011, “Politician’s Compass,” a sculpture with elements that point in any given direction, at any given time, has a certain poignancy,” said Goldwell President, Charles Morgan. “The piece fits with the character of the other eclectic works in the collection and its kinetic nature will provide a unique counterpoint.”

The public is invited to watch the installation and participate if desired. The free admission Goldwell Open Air Museum is located near the ghost town of Rhyolite in Nye County 4 miles west of Beatty off Highway 374, the road to Death
Valley National Park’s east entrance.

Goldwell Open Air Museum is a Nevada nonprofit organization that preserves and encourages artistic exploration in and of the Amargosa Desert near Death Valley National Park. The Museum cares for an 8-acre outdoor sculpture park near the ghost town of Rhyolite, which is best known for the ghostly “Last Supper” sculpture by Belgian artist Albert Szukalski. The Museum sponsors a year-round artist residency program in the Red Barn Art Center and presents art workshops and Open
Studio exhibits for the general public.

This project has been made possible in part by grants from the Nevada Arts Council, a state agency, and the National Endowment for the Arts, a federal agency. Additional support is provided through the Nevada Commission on Tourism and the American Recovery and Reinvestment Act.

What: “Politician’s Compass” installation
When: Saturday, June 18, 2011, all day
Where: Goldwell Open Air Museum, Rhyolite, Nevada
Admission: Free and open to the public

Vehicles Detoured through Lake Mead Due to I-15 Flood Closure