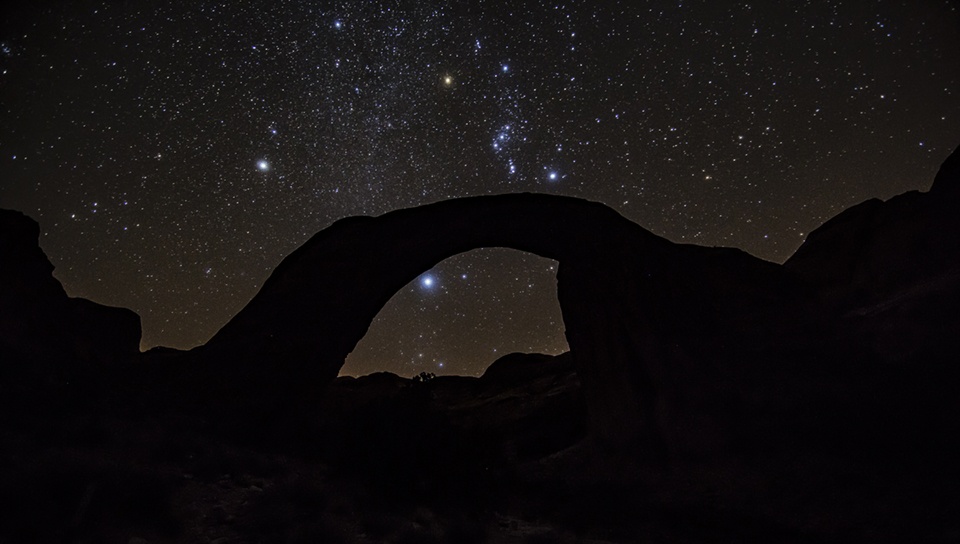 “This designation is an important step to ensure we protect the entirety of the landscape at Rainbow Bridge National Monument, which is sacred to many of the Native American Tribes in the area,” said William Shott, Superintendent of Rainbow Bridge National Monument and Glen Canyon National Recreation Area. “We’re thrilled to be the first National Park Service unit to receive this specific designation, as this will only fuel our night sky preservation efforts.”

Located in south-central Utah, Rainbow Bridge National Monument is one of the smallest units in the National Park Service and encompasses just 160 acres of land. It is accessible only by boat on Lake Powell or by backpacking in from Navajo Mountain. At least six area Native American Tribes, including the Hopi, Zuni, Navajo, San Juan Southern Paiute, Kaibab Paiute, and Ute Mountain Ute, consider the site sacred.

IDA established the International Dark Sky Places program in 2001 to encourage the protection of natural dark night skies around the globe through responsible lighting policies and public outreach and education. Rainbow Bridge National Monument joins a host of National Parks on the Colorado Plateau with International Dark Sky Park designations recognized by the IDA and celebrated for their naturally dark skies.

“We are pleased to honor and respect the status of Rainbow Bridge as the first Traditional Cultural Property accredited through the IDA International Dark Sky Places Program,” said International Dark-Sky Association Executive Director J. Scott Feierabend. “In the span of this remarkable natural bridge, we see symbolically represented the arch of the Milky Way across the night sky, a reminder of the long-held value of both Rainbow Bridge and the natural night sky to native peoples of the area.”

The designation will be celebrated with astronomy events throughout the year, the first of which will be held on April 21, 2018 at the Lake Powell Resort in Glen Canyon National Recreation Area’s Wahweap District from7:30 p.m. to 10:00 p.m. (Mountain Standard Time). This event coincides with the final day of International Dark-Sky Week, the first day of National Park Week, and the year’s second National Park Service Free Entrance Day.

In addition to these special events, visitors to the park can participate in a variety of astronomy programming ranging from star parties to solar viewing. These programs provide visitors an opportunity to learn about Glen Canyon’s skies and the continued efforts of the National Park Service and International Dark-Sky Association to preserve natural night skies.

For more information about the IDA, visit the International Dark-Sky Association’s website. For more information about night skies in national parks, visit https://www.nature.nps.gov/night/. To learn how you can get involved in night sky preservation in Glen Canyon or to learn more about scheduled astronomy and night skies programming, visit https://www.nps.gov/glca/learn/nature/night-skies.htm.