Some folks say the Mojave Desert is just a bunch of rocks – a “gravel pit.”  While other deserts around the world seem to be made of pure sand, those in the American Southwest are a bit rockier.  Sand dunes exist, only in sparse locales.  The huge monolithic structures that stand out so strikingly from a distance have served as backdrops to many an old western movie.

Why so many rocks?  Large megaliths are what remains from the upward movement of molten rock eons ago, forming mountains.  Boulders and smaller rocks have resulted from falls and breaks due to gravity, or from being tossed about by water deluges.  Smaller particles like sand were washed or blown away.  Notice how small pockets of sand and gravel fill the cracks and crevices between rocks toward the bottom of a hill.

What you are left with are large expanses of rocky terrain, with little soil development and little vegetation.  A lack of regular moisture means that little chemical weathering can occur.  Where in moister regions, soils are bombarded with mineral movement and biochemical processes and are in a constant state of recycling, rocky desert soils tend to stay put, barely changed.

The desert floor is largely made up of rock because it used to be the bottom of the ocean.  Huge rocks broke into smaller ones, eroded by water.  Some rocks are fossilized remnants of other things.  For instance, petrified logs are the mineral replacement of living tissue.  And some places in the desert reveal an abundance of fossilized shells and other prehistoric aquatic life.

Those natural piles of rocks have many practical uses.  Desert tortoises and other reptiles will aestivate during the hottest, driest months of the summer, usually in burrows but sometimes in the cool shade under rock piles. Ringtails and pikas prefer to live amongst rock piles, too.  And many other animals like to hide in them.  In the extreme dry heat of the Mojave Desert, cover becomes essential.  Just like people coveting shaded parking spots, animals seek out any reprieve they can find.

But what are those other rock piles that you see?  Did you ever notice the small piles of rocks along the side of the road as you drive the highways of Nevada?

In days past, various cultures made cairns, or stone towers, that were used to mark stops along trails, or other places of significance.  They were usually conical in shape, with one rock balancing on another.  Sometimes they were highly decorated.

Inuit peoples made another kind of stone structure, called an inukshuk.  These sculptures were made to look like people, signaling directions and landmarks in a welcoming fashion.  They were also used to channel caribou hunts.

Nowadays the odd rock piles you see, especially near entrances to parks and other natural attractions, are a type of graffiti.  They are made by someone in an effort to leave their mark at an impressive place.  In northern Nevada, people take large rocks and make their initials or words with them.  It’s rather like carving your initials in a tree, in a place where rocks are the artist’s most accessible medium.  It’s pop art in the desert.  Now you know. 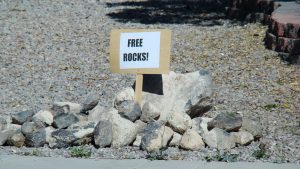