One summer day, she went away.

Gone and left me, she’s gone to stay.

She’s gone, but I don’t worry,

Cause I’m sittin’ on top of the world.

Sitting on Top of The World (Traditional/Cream Version)

I was chewing on some brittlebush and watching over the box canyon.  The bushy flats on both sides of Wildrose Road greatly narrows  as the road approaches the canyon and disappears entirely as the road meanders through the narrow canyon. The canyon has tall loose, rocky walls spotted with white salt crystals.  I was sitting on top of the canyon walls and looking down.  It was freakingly hot out in the sun, although not Badwater Basin brain-frying hot.  I guessed it was about 105°F up on the rocks in clear view of the sun.  It must have been probably 110°F  or more down at Badwater.  I lived down at Badwater for a few years but decided one year to make the move up here to the Wildrose area. 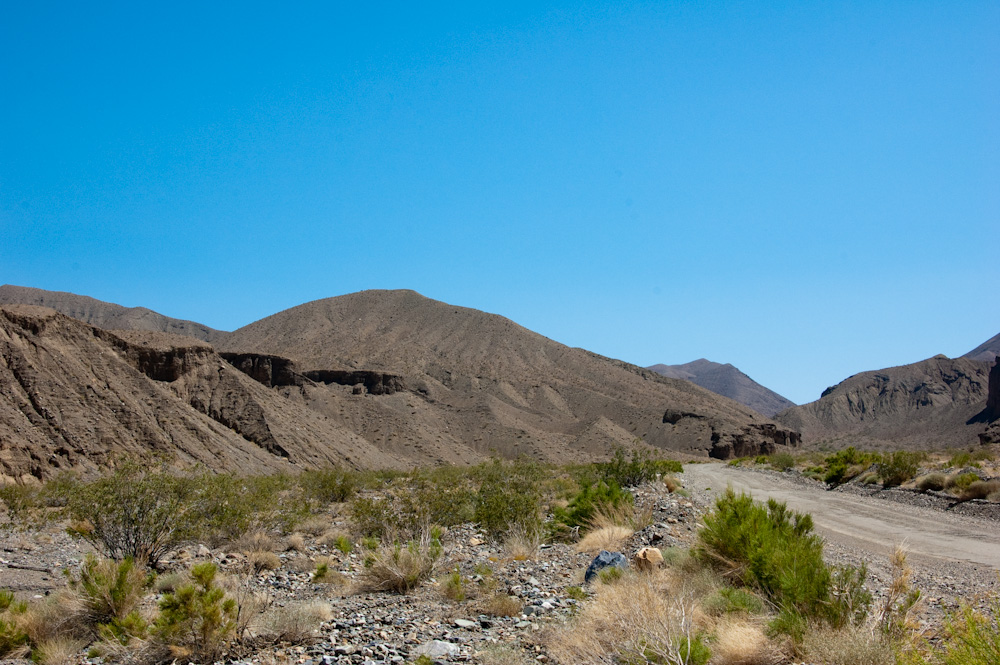 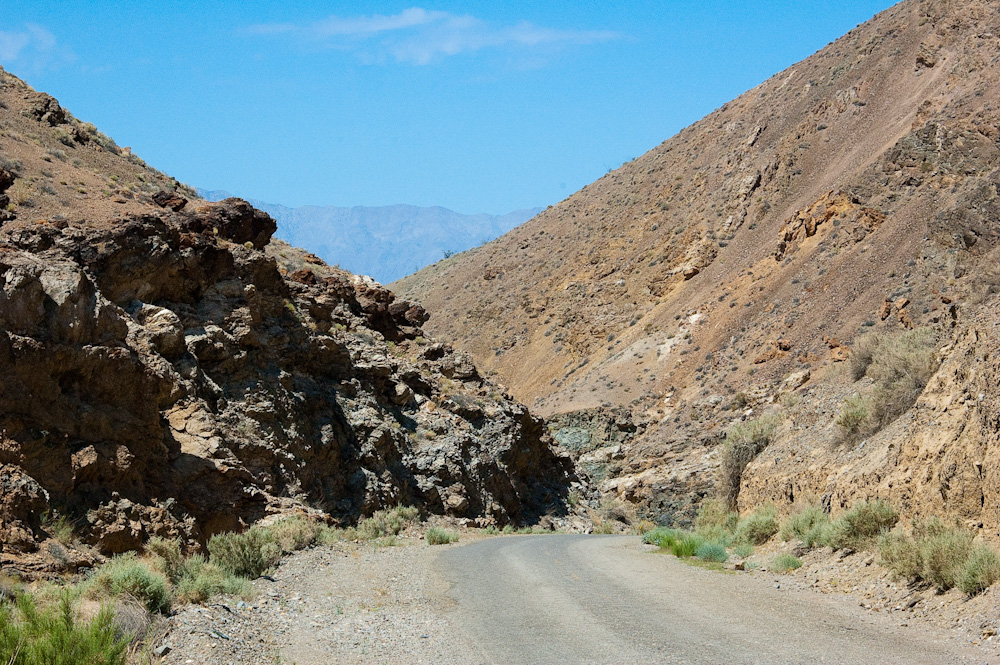 A car was coming up Wildrose Road towards the canyon.

I pushed on a small rock. It dropped from the top of the canyon, bounced off a couple of protruding rocks, and landed on the dusty dirt road.  I did it again, but with a larger rock.  Down in the canyon, the trucked stopped, a woman jumped out, grabbed binoculars from the backseat, and looked up at the top of the canyon.  At first, I did’t think she saw me.  But, I was not hiding.  I slapped my tail against a rock to signal my son to stay hidden, but he could not resist taking a look.  He became very rebellious after his mother left us for a more dominant male somewhere near Emigrant Pass. 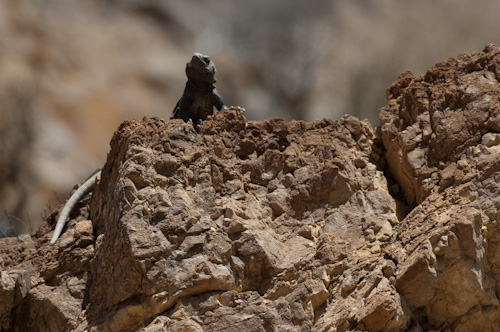 The woman appeared giddy as she spoke and motioned to a man I assumed was her significant other.  I got a real good laugh at the silly safari hat the man was wearing. 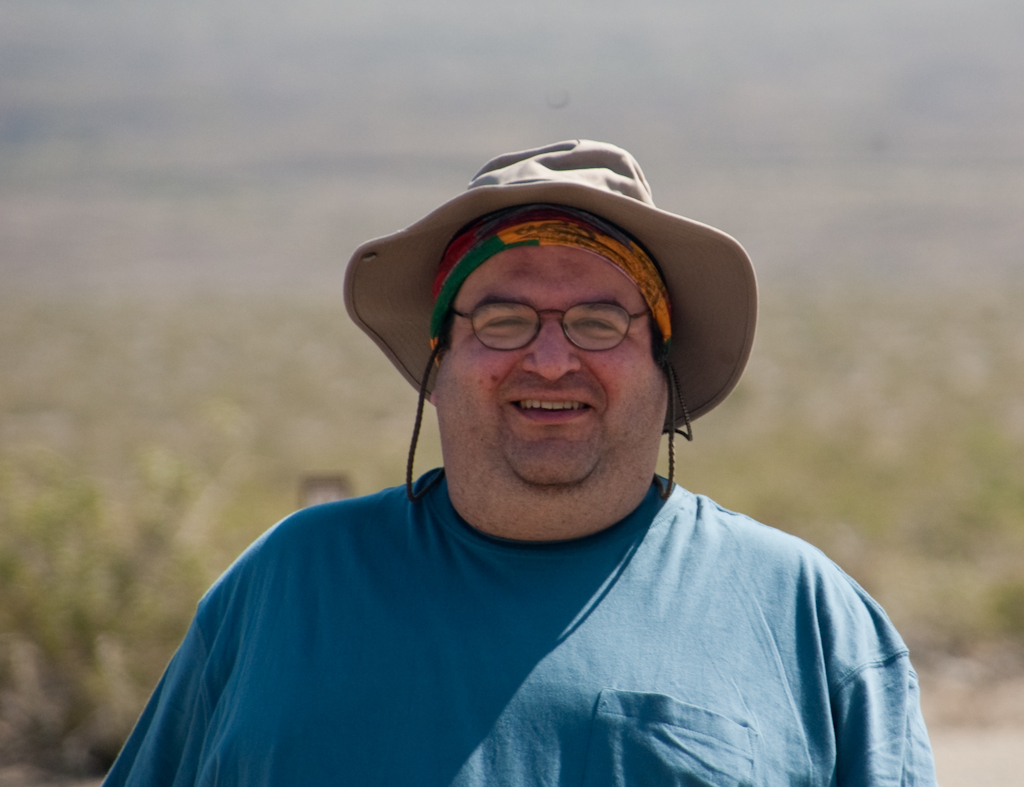 Although sound traveled well through the very narrow canyon, I did not understand what the two were saying to each other.  They did not speak my language but I assumed that she thought she spotted me.

The man opened a large wooden crate that was in the back of their truck.  Not having any idea of what might be in the crate, I stepped backwards a little.  I had a narrow line of sight of the couple through some crevices, but that meant they also had a line of sight towards me.  The woman and her binoculars were constantly scanning my area.

The man pulled out one of the largest lens I had ever seen and I had been watching tourists pass through Death Valley for over 20 years.  The lens was certainly not of the handhold variety, but they did not set up a tri-pod.  The man used the woman’s shoulder to support the lens.  They were moving pretty fast; probably expecting me to disappear into a cave on a second’s notice.

However, I felt very safe and was not going anywhere.  I looked over at my son and he was safely tucked into a crevice.  I was in a fairly good mood that day -despite the heat-, so I decided to show off a little.  First, I did some head-bobs and push-ups.  Then, I pushed over a couple of more smaller rocks.  After they spent about 10 minutes taking pictures,  I made my way to the very tip of a rock outcrop and just looked straight down on them.  They were in full view of my yellow and black eyes, sharp front claws, and flat underside.

They were practically drooling over my show like they had never seen one of my type before and spent about another 10 minutes watching me before they finally packed up their gear, drank a few bottles of water (smart!), left and continued up the road.  As the truck drove by, its windows were open and some song was playing that I swore I heard before, but not in years.  My son would later ask me about it, but I would be unable to remember the song name or who it was by. 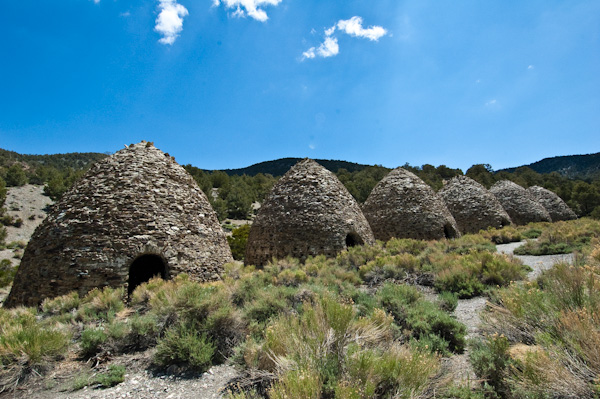 I presumed that they were heading towards the old charcoal kilns.  They did not look like the type that could do the 14 mile round-trip hike to Telegraph Peak and it was way too late in the day to even start such a hike. 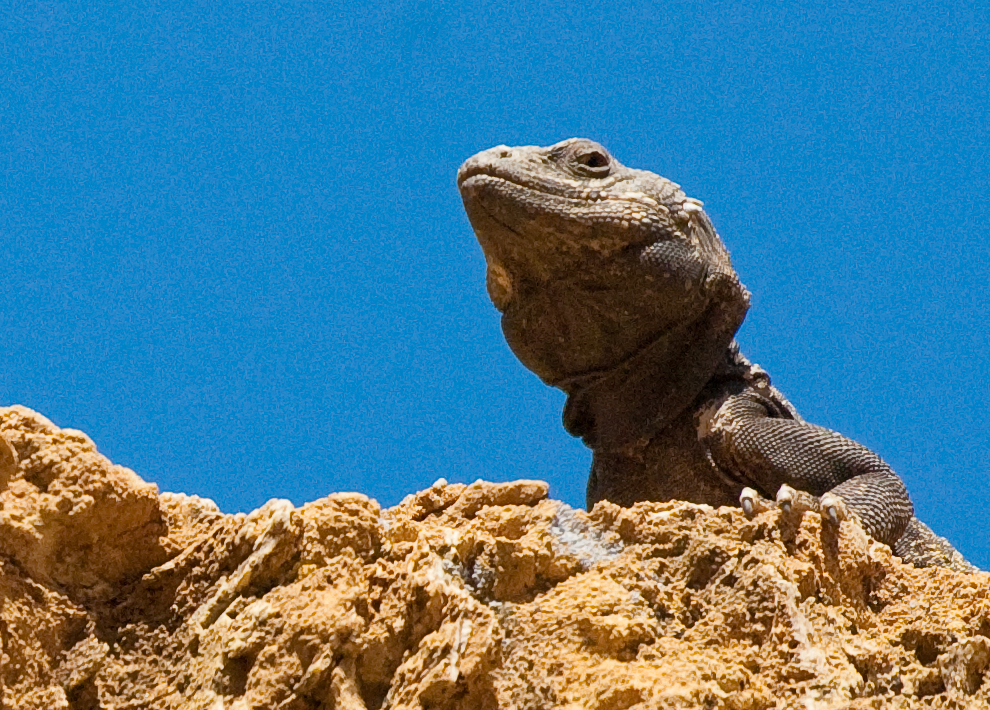