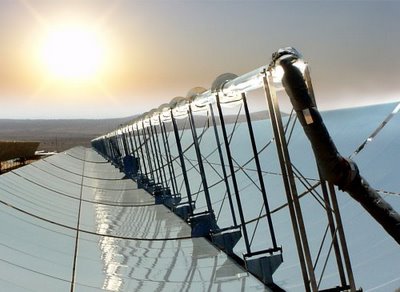 “Most people that know me know I spend a lot of my time hikin’ around Southern Nevada, ‘cuz it takes alota hikin’ to come up with all these misadventures. I’ve lived in Nevada almost my whole life, and it seems like we’re really good at getting’ suckered into givin’ things away. And I mean irreplaceable things, like land, wildlife and water. We’ve put up with the Federal Nuclear Power Plant bein’ shoved down our throats, national builders and developers strippin’ water from land so they can build another million or so boxy little homes, and now, my fellow Nevadans, comes Solar Millenium LLC (that stands for limited liability, folks). This “California-based developer” which is really a subsidiary of the German company Solar Millenium AG, is workin’ on a deal to build two 268 megawatt parabolic mirror trough solar plants out in Armagosa Valley, about 75 miles from Las Vegas.

So, here’s the deal. Solar Millenium is takin’ over 7,810 acres of Bureau of Land Management land, and usin’ 4,350 acres for its initial plants. If the design goes as planned, it should supply electricity for almost 500,000 private residences. On the surface, this sounds great. Harness the sun, supply sum power, lose our dependency on foreign oil, that’s great. But for me, there are two major problems. The first is that they will have to purchase water rights from the surroundin’ area to operate the plants. Now it is really up in the air as to how much, but no matter what, there will be alfalfa farmland and desert habitat stripped of their water to fuel these plants. Land with water is alive, property without water is a wasteland. Destroyin’ one natural resource to develop another seems ridiculous, but I guess destroyin’ a natural resource for profit makes sense. The other huge problem is the stripping of what a Solar Millenium spokesperson called 7,810 acres of “worthless desert habitat”. Now, this “worthless desert habitat” is my home. It is loaded with sparrows, nighthawks, bats, lizards, rabbits, snakes, kit foxes, kangaroo rats, desert tortoises, wildflowers, breathtakin’ sunrises and romantic sunsets. It’s the pupfish in Devil’s Hole, it’s the stark landscape of Ash Meadows National Wildlife Refuge, it’s the wild burros, it’s Nevada. And after the land has been stripped, the wildlife driven off, and the massive 60’ mirrors installed, there will be somethin’ lost. And what is lost are the topics I write about almost every day.

It’s America that’s shrinkin’, not the corporate bottom line. We’ll lose it, just like we’re losin’ all our natural environment, and it’s a loss that no stimulus package in the world can ever replace. So, if you’re watchin’ the nightly news and you see a dog whose lashed himself to sum sagebrush out in the Nevada desert somewhere, you’ll at least know what’s goin’ on.”

Fans Flock to the Desert for Music Festivals