Tarantulas on the March 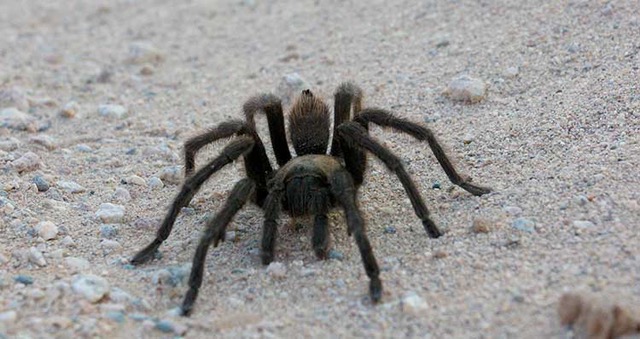 Why did the tarantula cross the road?  Well, no, not just to get to the other side.  Fall in the desert is the time of year when male tarantulas go on a “march” to seek out females.  It’s not that they particularly look for roads to cross, but because there are so many of them in such a large expanse of territory, there are bound to be some of them that come across roads.  (Some of them can cover 50 miles in their lusty trek.)  So it follows that driving along roads is where you’re most likely to see them.  And the fall march can be a sight to behold, depending on the population.  The populations seem to follow a boom and bust cycle, depending on the weather and the food availability.  The number of males may be greatly diminished if the rains have been sparse.

Here in southern Nevada, the march goes from September to October.  Visitors to the Valley of Fire State Park reported seeing some of the spiders on the move in September.  As of this writing, in October, folks in southern Nevada are seeing a lot of them.  They may have been somewhat delayed this year due to the lingering hot temperatures.  Gabbs, Nevada is home of the world’s largest tarantula migration.  The “migration” can start as early as August in Texas, and in other areas such as the Four Corners region, it begins in October. I witnessed my first tarantula migration in Zion National Park around Labor Day.  By the time the cold weather approaches in November, the march is over.  If there are any males left wandering about at this time, they are doomed to perish from the near freezing temperatures. 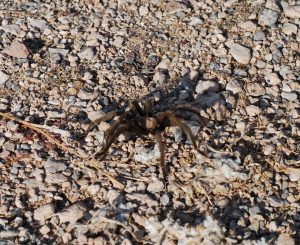 The females have it much easier.  They just stay in and about their burrows and wait for suitors to appear.  Do they have to accept the first one that they see?  Definitely not – a female will kill and eat males that do not suit her.  Well, actually, she may kill and eat the successful one as well.  All in all, it’s not a good outcome for the males.  They only live a few years, then have to trek up to 50 miles just for a chance at procreating, and are doomed to die afterwards, whether from cannibalism or sheer exhaustion.  The female tarantulas, on the other hand, live this selective lifestyle, in a home of their choice, selecting mates of their choice, for up to 20 years.  Needless to say, females grow bigger than the males.

Now a little on the natural history of the tarantula:

There are over 50 species of tarantulas native to the southwestern and central portions of the United States.  The common desert tarantula is Aphonopelma chalcodes.  Its preferred habitat is dry, well-drained soils in open areas throughout the desert and grassland areas, including  Joshua tree forest and creosote bush scrub.

Tarantulas are a member of the Arachnid, or spider family.  That means they are animals with an exoskeleton – their skeleton is on the outside of their body.  Spiders and tarantulas are not insects, but more closely related to Crustaceans, like crayfish.  Tarantulas are about two inches long with black or brown hairs all over them.  The body has two parts, with the head and thorax fused into a cephalothorax, and the abdomen.  They have eight legs and eight eyes.  Legs can be four inches long.  There are also two pedipalps that look like short legs, used for touching and moving prey. Prey can be sensed by vibrations picked up by the sensitive hairs.  Rather than waiting for it to fall into a web, tarantulas do chase down their prey.  They then subdue it using two large fangs, which inject a venom that liquefies the inside of the prey’s body.  Like other spiders, the tarantula utilizes a sucking technique for ingesting its meal.

Each tarantula lives in a burrow, or hole, which it digs itself.  The webbing in the burrows actually serves to reinforce the structure and keeps it from collapsing.  Tarantulas are nocturnal and come out at night to search for insects, lizards and other small animals to eat.  During the day, they keep to their burrows or other sheltered sites to avoid the heat (in the summer).  In winter, they will enter torpor, similar to hibernation, but it allows them to come out and hunt when it’s warm.

They do have predators, too – there is an insect that preys on the tarantula – a wasp called the tarantula hawk. The female of this large Pepsis wasp seeks out tarantulas in their burrows, then lays its eggs on the spider’s body.  When the eggs hatch, the wasp larvae have a ready-made meal.  Other predators on the tarantula include lizards, snakes, birds, foxes, and coyotes. 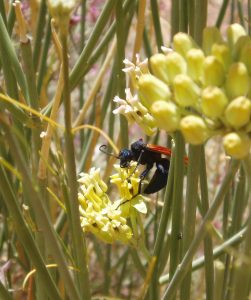 Tarantulas got their name from Taranto, Italy.  People used to do a dance called the Tarantella to cure them from tarantula bites.  But the bite from a tarantula is really not very harmful, just painful.  And you would have to provoke the tarantula to experience its bite.  When it feels threatened, the spider can also flick its urticating (barbed) hairs onto your skin, which can be irritating.  This is done by rubbing its abdomen with its legs.  You may see a bare spot on a tarantula’s abdomen where it lost its hair.  This is often seen on captive tarantulas. 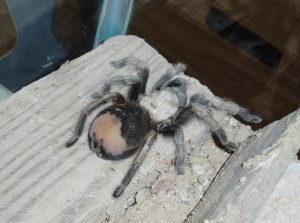 In the fall you can see male tarantulas crossing roads – they are looking for a mate. Immature males spend most of their time in their burrows, but at about three years of age, they mature and molt for perhaps the final time, becoming darker in color.  If they escape being eaten by their mate, as well as predators and the cold, the males may go on for a few more years.  The longest they have been known to live is 10 to 12 years.  Females can live 20 years or more, and produce 500 to 1000 young at each mating.

So if you get to witness this phenomenon, grab a camera.  It’s ok to park the car safely and get out to take a look, but it’s not a good idea to trap the animal under a jar.  The glass magnifies the heat and can kill the tarantula.  If you get to see one of these creatures, it’s best to let it go on its way – remember it is beneficial!  You may also be tempted to take one of the tarantulas home with you, but please don’t do it.  These guys won’t make good pets because they are on their way out anyway, so let them have a last hurrah.  If you do want a tarantula as a pet, you can get more information from the American Tarantula Society, at https://www.atshq.org.

For more information on the tarantula and other southern Nevada wildlife, check out Dr. Jim Boone’s Bird and Hike Las Vegas, https://www.birdandhike.com.