Photos and Text by Gordon Burhop 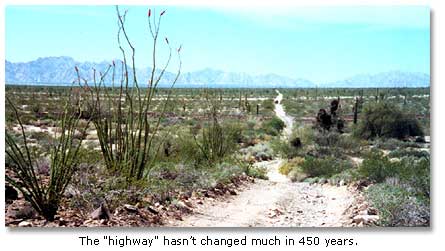 El Camino del Diablo – the Highway of the Devil – once a 250-mile link between the northwestern frontier of Mexico and the colonies of California, began at Caborca, in Mexico’s state of Sonora. It extended north northwest across the desert to what is today the United States/Mexican border. It turned west northwest and followed the border through a phantasmagoric landscape of organ pipe cactus, desert flats, drifting sand dunes, ancient lava flows and searing summer heat, passing through the southern edges of Organ Pipe Cactus National Monument, Cabeza Prieta National Wildlife Refuge, and the Barry M. Goldwater Air Force Range. Marked by graves and headstones, it reached a merciful end at Yuma, Arizona.

The landscape has changed little since the coming of the early Spanish explorers, who chronicled their own passage across the region but gave us few insights into the local tribes they encountered—the Sand People or Sand Papagos, Yuhas and others.

El Camino del Diablo entered history when Francisco Vasquez de Coronado arrived in 1540, having led his famed expedition from Mexico City to begin exploring the Southwest in search of the mythical seven cities of Cibola with their streets of gold. At an Indian village near where Caborca now stands, Coronado heard of a juncture of two major rivers some three to four weeks travel to the west. He dispatched one of his captains, Melchoir Diaz, to lead a side expedition to investigate the report.

Diaz assembled his party and supplies and set out across the desert, the first Spanish “entrada,” or excursion, into the region. The hardships they encountered prompted them to name the route “El Camino del Diablo.” Padre Eusibio Kino, a Jesuit priest, undertook the next major exploration of the area late in the 17th century. He mapped the area and located most of the water stops. Juan Bautista de Anza led 200 colonists from Tubac, Arizona, across part of the trail in 1775 on his way to found the city of San Francisco. 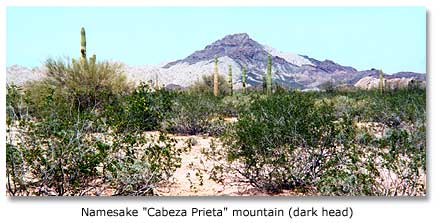 Conquistadores seemed to manage relatively well in the harsh, desert climate, perhaps because many of them had come from Extremadura, an arid region in western Spain, where hardship and poverty forged endurance.

U. S. pioneers from the east, especially the gold hungry 49er’s, seemed to fare less well. With water holes three to four days apart, they struggled to carry enough water for people and animals. (In the 120 degree Fahrenheit heat of summer, a person requires two gallons of water a day just to survive.) A breakdown, injury or sickness that cost a delay of a day or two on the trail could mean calamity. The gold seekers most often crossed during the summer, when temperatures climbed to fearsome levels, but also when marauding Indians retreated to the cooler high country and when monsoon season rains filled at least some of the few tinajas, or water holes. 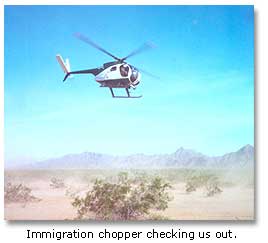 Various friends and I have traveled El Camino del Diablo by four-wheel drive vehicle on four occasions since 1993, most recently in March of 2001, when we started the trip at Caborca, the original beginning of the trail. We traveled north northwest up Mexican Highway 2, crossed into Organ Pipe Cactus National Monument at Lukeville. We followed the border west to Quitobaquito.

Even today, the area encompasses some of the most remote and undeveloped desert in the United States. There are no amenities of any kind. The traveler must be self sufficient. The trail does have about half a dozen more or less “reliable” water sources, but the water would require purification before drinking. If the area is harsh, it does have some special attractions. It is home, not only to desert bighorn sheep, but also to the very rare Sonoran antelope.

From Quitobaquito, we continued west, still following the border, headed for Papago Well, an abandoned cattle station converted to a wildlife water hole. Campers at Papago Well should set their tents and sleeping bags at least a quarter of a mile away from the water hole so the wildlife will feel free to come in to drink at night. The reward will be the sounds of coyotes yelping during the early morning hours.

West of Papago Well, we crossed a large playa—a natural shallow, usually powder dry desert basin which can impound runoff from an infrequent heavy rain and turn into a lake. Five miles out of Papago Well, we came to a grave with a dubious distinction. It belongs to one Dave O’Neil, a late nineteenth century cowboy who got drunk one night and fell into a stock tank and drowned, probably the only person to ever meet such a fate in this land where annual rainfall averages two inches. Travelers, today leave coins and trinkets at his grave.

We crossed the pink Pinta Sands, which provide a stark contrast to the black lava which flowed north across the border from Sonora’s Pinnacate volcanic region. We came next to the pass between the Cabeza Prieta and Tule mountain ranges, passing a number of pioneer graves on the way to the sites called Tule Well and Tule Tank. 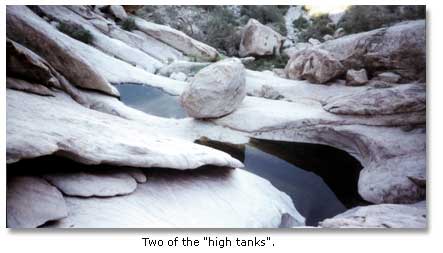 At Tule Tank Canyon, we hiked half a mile hike to reach a tinaja. Here we found morteros (bed rock mortars, which the prehistoric people used for pounding seeds into flour), the very rare elephant tree, a 10,000 gallon water catchment, a steep rock-filled canyon, and…mountain lion tracks in the sand. Because of the accessibility, this is the most visited area of the Cabeza Prieta Wildlife Refuge.

We continued westerly, closely paralleling the international border for twenty miles. We crossed the sandy Lechuguilla Valley to the Tinajas Altas Mountains, the site of the last watering holes before Yuma and the juncture of the Gila and Colorado Rivers. The tinajas consist of nine major catchments, some containing up to 20,000 gallons of water. We found more morteros, and on a large rock below the first tank, we discovered petroglyphs (rock art images which are scribed or pecked into the surface of the stone).

It’s a hard and difficult climb to reach some of the tinajas.

At one time, some 40 graves of pioneers lay at the base of the canyon, the markers of men who found the lower tanks dry and lacked the strength and endurance to reach the upper tanks.

Here we came to a fork in the road, where there are two ways out. The shortest route would have taken us north, on the east side of the mountains, through the bombing range (permits required) to Interstate 8 and the Gila River at Wellton. Naturally, we never do things the easy way. We chose the road that took us northwest, up the west side of the mountains, through Fortuna, now a ghost town and abandoned mine. From there, we followed the road north northwest to Interstate 8, about 18 miles east of Yuma. 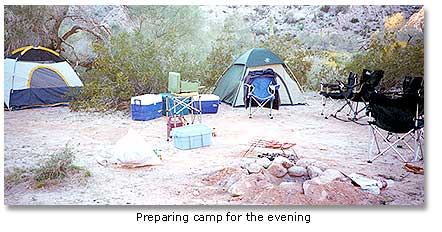 Trip Information
Starting from the U. S. side of the border, travelers can reach the trail by traveling south from the community of Ajo across the Organ Pipe National Monument to Cabeza Prieta Wildlife Refuge. Or they can intersect the trail at about mid-point by traveling south from Tacna and crossing the refuge to the pass between the Cabeza Prieta and Tule mountain ranges.

If you want to travel El Camino del Diablo, I recommend that you take two 4X4 vehicles and spend at least three days. Permits (as well as historical sources) are available at no cost at the Cabeza Prieta Refuge office in Ajo. Goldwater range permits are available at the Marine Air Base in Yuma. (Note: Do not remove or handle any ordinance that you might find on the range. Note the location and report it to the authorities.) Be entirely self sufficient. Water sources are not reliable. If you come well prepared, you’ll discover a wonderful and safe way to re-live some of the pioneers’ experiences.

Note – This is not a trip to take in the summer.