The first post of The Mojo on the Mojave will pay tribute to the people of Haiti.  Haiti and the Mojave Desert seem a world apart but we both share the history of large earthquakes.  At 04:57 local time on June 28, 1992, a large temblor awoke much of Southern California, this was a magnitude 7.3 earthquake that occurred near the town of Landers, California.  The quake was the largest earthquake to have occurred in the contiguous United States in 40 years at that time.  Even though the Landers earthquake was a little larger than the Haiti earthquake we were fortunate that the Landers earthquake did not harm more people.  It was in a rural area and as most of us know California building standards are among the most strict in the world, thus our damage and the loss of life in this earthquake was minimal when compared with Haiti.  Still most people don’t know that two people died as the result of heart attacks and a three-year-old boy died when the home’s chimney collapsed into his living room and more than 400 people sustained injuries as a result of the earthquake. As far as Haiti, donations are a great way that we can send some of our Mojo to these people who must endure such a horrible tragedy.  I will now share with you a few personal pictures of that tragic day in the Mojave Desert in hopes that it might help a few of us connect with the people of Haiti.

I hope you enjoy this blog today and in the future.

The Yucca Bowl on the morning of the earthquake 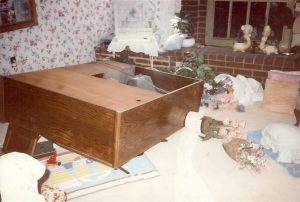 My mother’s living room 2 miles from the epicenter 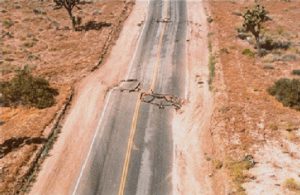 A chain link fence in Landers