When I first started shooting seriously back in the darkroom ages, my goal was to be a photographer whose work made a difference. By exposing injustices or social ills, the work would be a key to understanding those issues and lead to solutions to tough problems.

It was a rather grandiose idea. But I was young and had great ambitions. 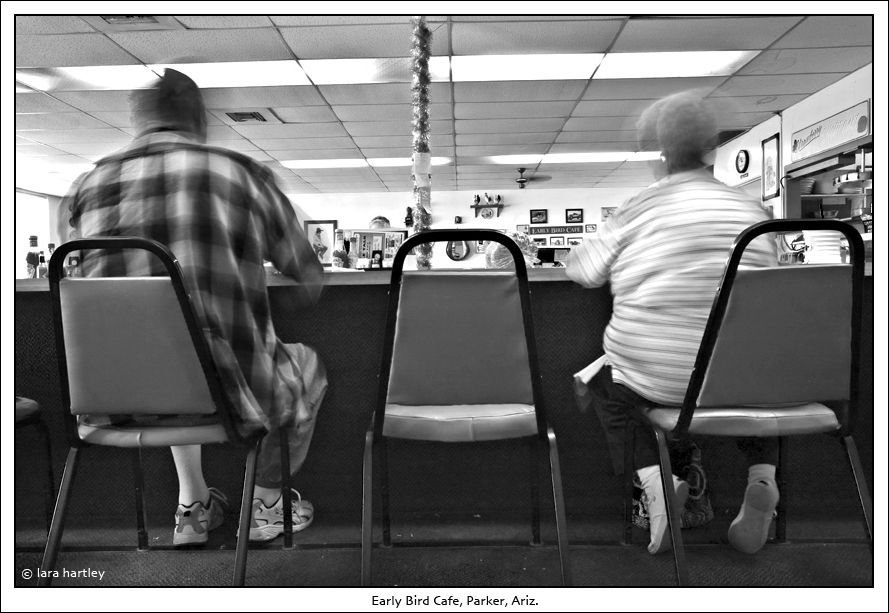 Now I am older, but with somewhat the same ambitions. Hopefully my “serious” work would lead to a greater understanding of whatever the subject might be; perhaps not leading to social change, but definitely creating an historical, photographic record of the time, place and people. Each photo may not be a work of art standing on its own, but placed in a larger context, it has something to say.

“The term photo-essay implies something extended, structured, and multifaceted: the exploration by one (usually) or more photographers of an issue, place, or social situation in a more or less leisurely manner that reveals its character and dynamics.”*

Wow, that’s a lot of serious words, but they accurately define the term “Photo Essay.”

We talked before about what to do with a box load of prints, or a computer full of images, and creating a photo essay of sorts was one of the suggestions.

In this column I am talking about the social-documentary exploration where you decide on a subject and work from that premise as explained above.

The photo essay was popularized by Dorothea Lange and other photographers during the 1930s. Photography lends itself particularly well to the essay. It allows you to investigate how you feel about something in particular, using images instead of words. 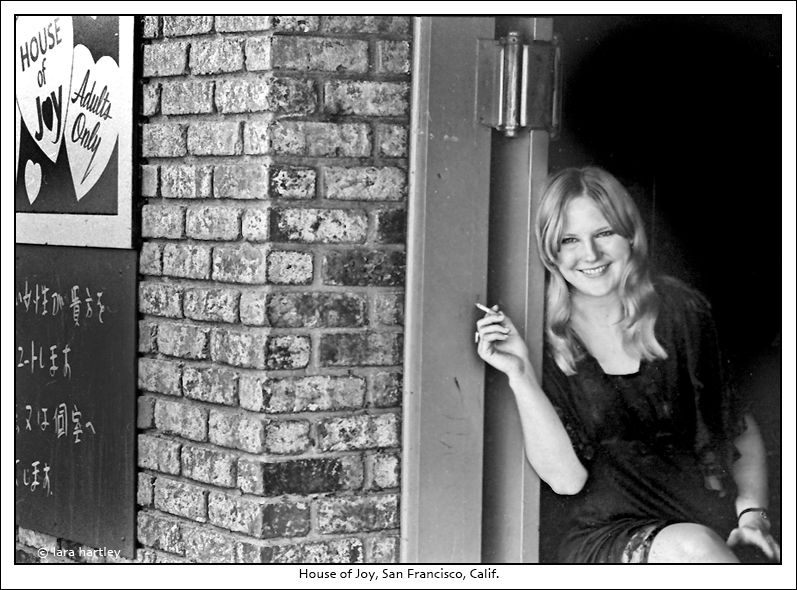 My first documentary started with a series of images shot in San Francisco which were to be part of a large exhibition for the 1976 U.S. Bicentennial Celebration. There was a documentary photo class at San Francisco City College taught by a well-known former Life Magazine shooter. I had the privilege to be chosen to take part in that class. For the exhibition we were to cover all parts of the City and document what we saw.

My partner and I chose downtown San Francisco and the Tenderloin District. Not the best neighborhood for raising a family, but so full of great photographic possibilities. Exotic dancers, shoeshine guys and prostitutes provided grist for the photographic mill painted with a black & white palette. 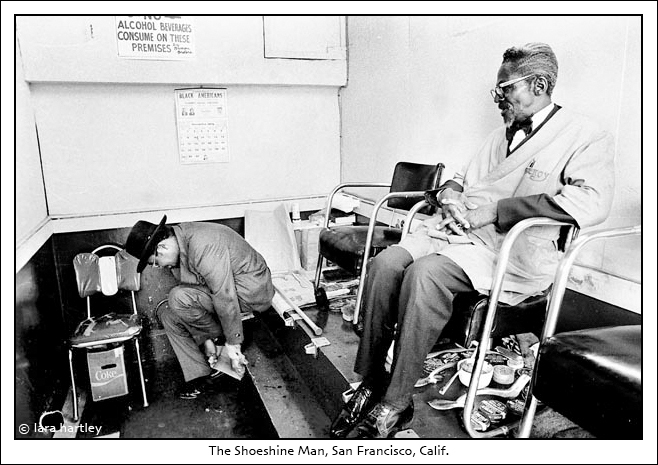 Add a few hotels for senior citizens, a Columbus Day parade, and an antiwar demonstration, and a photo story was born.

Even today beneath the sordid Tenderloin exterior, there exists an exciting and diverse culture. Corner sandwich stands, obscure diners with great food, and markets with roasting chickens and ducks hanging in a window.

Before I even stepped foot on the streets of the District, I had a meeting with a shady character in a barely lit room. I explained to him what my plan was and he said he could make it easier for me by putting the word out I wasn’t to be hassled.

Now, I do not know if this gent had that kind of power or not, but I wasn’t really bothered by anyone. This was before folks were used to seeing photographers wandering about in less-than-desirable areas so my presence was unusual.

I walked miles in the City, sometimes with my photographic partner but usually without. We had a large area to cover, just the two of us, so we split up to find our documentary.

One day I saw a group of “workin’ girls” and started to photograph them. The leader marched up to me and said “Honey, you take our picture and I slap you down.”

That was the clue to vacate my street corner. She was a lot bigger than I and believe me, honey, I was not going to argue.

So I went around the block; hid in a doorway and with my heart pounding, surreptitiously took their picture.

Many images from this time have mysteriously disappeared, and I am afraid this is one of the missing bunch. But I can still see the image in my mind. 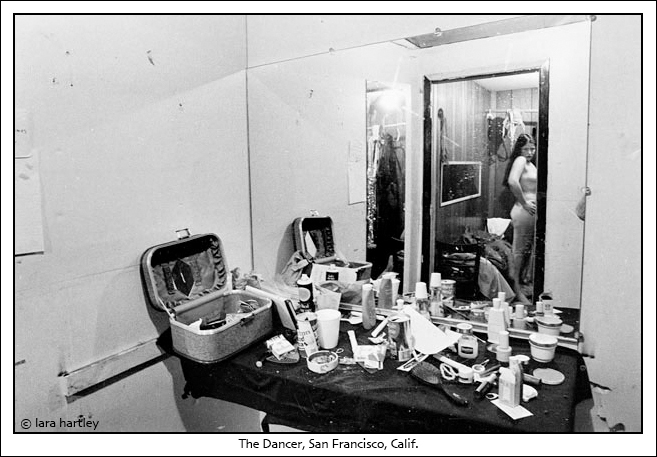 Another day found me outside a theater where exotic dancers were performing. I asked the manager if I could take pictures and talk to a dancer. He said “Sure,” and introduced me to a lovely girl from Austria, who was more than kind enough to allow me into her dressing room, and to photograph her getting ready.

There was not much to getting ready.

To her innocent-looking scrubbed face, she added layers of heavy make-up, took off all her clothes, pasted on some pasties, picked up a feather boa and was ready to go.

I sat down in the audience of a very dark theater and watched her perform. I clicked off only a couple of shots until a guy in a raincoat a few seats down, started making me uncomfortable. (I am not joking.)

Besides, those old film cameras made a lot of noise as the mirror flipped up and down. A loud KaClack could be heard over the canned music.

As I was leaving, the manager suggested I might like to take up “dancing” myself — with my camera even.

I politely “No thanks-ed” him and went on my merry way.

I think this was my first indication that photography was a way to escape my shyness and find adventure, becoming an adrenaline junkie in the process.

FINDING YOUR OWN STORY

Not all photo essays have to be in dirty downtown areas, especially now when the streets are full of mentally unstable people and junkies who would just as soon hit you over the head and take your camera gear to pay for another fix. It just isn’t worth it.

A simple place can be the impetus of a new photo essay: a local bar, a familiar laundromat or a small town nearby that intrigues you.

The best approach is not to walk in and just start shooting. It’s easier if you go in slowly. Sit awhile, have a cup of coffee, take notes. After a few visits and conversations with the regulars, explain what you are doing, and the next time bring in the camera. 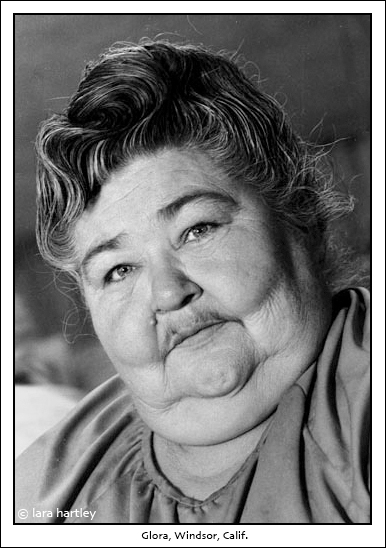 You don’t have to take pictures that first time, or even the second. Big black cameras in front of your face can be rather intimidating. Remember, this is a place you want to visit more than once. You don’t want to scare people off.

If you have the option of a small and excellent point & shoot camera, that could be a good choice to ease the tension the big, black, photograph-making tool creates. Make sure it can do all you want it to do and it allows you to capture your vision. No point in having a great idea in a super location if your camera is not up to snuff.

Most people are flattered when you explain what you are doing. Tell them they have a great face — because they will have, otherwise why are you photographing them?

If you plan on using captions, get the basic journalism questions out of the way first: Who, What, When, Why and Where. Once you know something about your subject and your location, the actual photography becomes more meaningful.

There are photo collections centered around objects, architecture, hood ornaments, classic cars, green peppers, etc. I find I prefer stories with people. That’s not to say I am not intrigued by abandoned structures like hospitals and old homesteads. But those are more like collections of interesting pictures than a group of story-related images.

Elements such as empty rooms, stairways, billiard balls and other static things can be part of the tale — the supporting cast to the stars of your show — people. What details surround people are clues to their story, as are their facial characteristics and expressions. 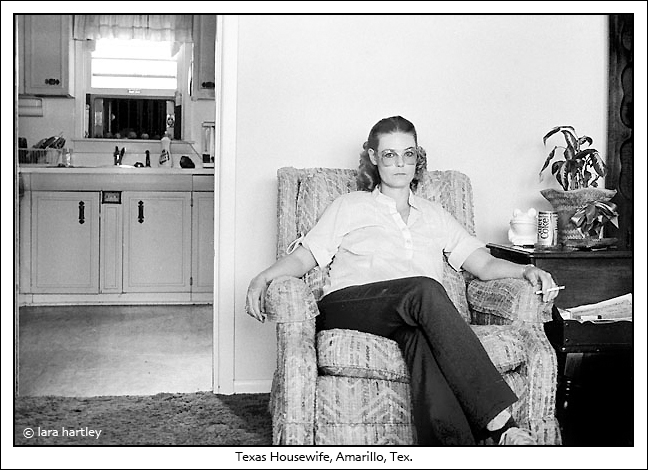 For your first photo essay, take a walk. Yes, a walk. Walk through your neighborhood. Your church. The diner on the corner. Again, take notes. Writers do best when writing about something they know. Even fantasy fiction has elements of the writer’s experiences. In order to shoot a meaningful photo essay, you must start with something you understand, as well as something that interests you enough to want to get closer. So get out there. Have experiences. Meet people. Stop being shy. If you can say all you want about a subject with a limited number of  photos, your essay can be a few as nine or ten images. Or you can use as many as you want.  Just don’t become redundant or bore the viewer.

If you can, go to galleries and museums with photographic exhibits. Study what other photographers have created in their photo stories. Check out what the library has to offer. The more you know about what makes a good documentary, the easier it will be for you to create your own. Learn to edit your story to show only the most telling and emotional moments.

Your stories can go in more than one informational direction. One would be including captions. If you reveal a lot of information, you are telling the viewer/reader what you want them to see. If you don’t provide anything more than just a title — and I like titles — you are inviting the viewer to imagine their own story based on your initial assertion. If you don’t use either captions or titles or accompanying text, then the story is up to the viewer. 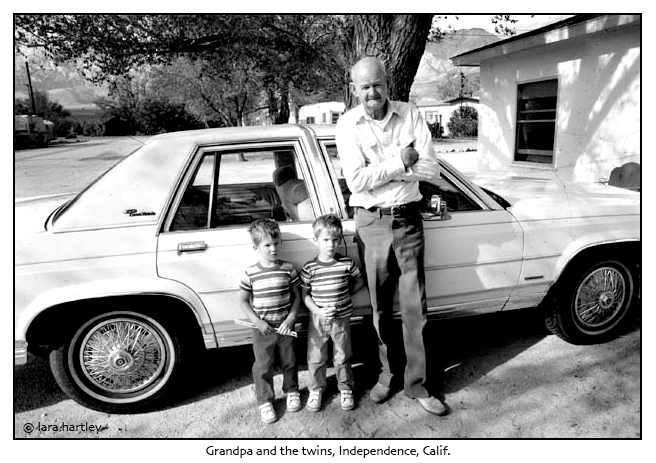 Each of those choices is valid; it all depends on how you want the story told. Don’t be surprised if what the viewer sees is not what you saw nor what you were trying to portray.

I have always said, there are no ugly people. Everyone has some characteristic that is beautiful. The only thing I find ugly is evilness. It is hard to find beauty in the truly evil. But evil can be photographically interesting. But I digress.

The more I worked on a variety of different photo projects, the more I realized there was a common, unifying theme. And it does sound grandiose. I call it “The American Landscape.” Images of just plain folks doing what just plain folks do. That includes almost everyone that is not a celebrity. Like I said, a grandiose notion.

In the long run it has made my documentary shooting easier as most all of the images go under that one large umbrella. There may be separate categories the photos can fit in, but the overall goal is to to create an image record, my vision of the American Landscape.

Environmental portraits are part of that record, so not every photograph is a haphazard moment. Oftentimes, I will stop on the street when I see someone with a great face in a great place and ask if I can take their picture. They usually say yes, but I can tell they are thinking, “What, is this lady nuts?” That’s ok, as long as I get the shot. 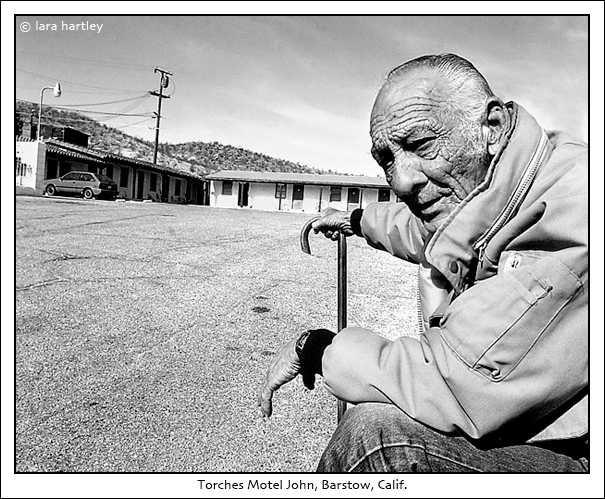 Then there are the moments when you see something that is absolutely perfect, but you have no camera, or the perfect moment is so ephemeral there is no opportunity to take a shot. That’s ok. Tell your mind’s eye, “click.” Now the image is there forever. You never have to see a negative or a print.

This is also a good way to practice your photo essay skills. Always keep looking, making those mental images. Who knows, you may see something similar again and at that time, you may be able to make the camera go “click.”

You may not end up with some grand prize for your Photo Essay, but I guarantee you, you will have a grand time.

6 responses to “The Photo Essay”