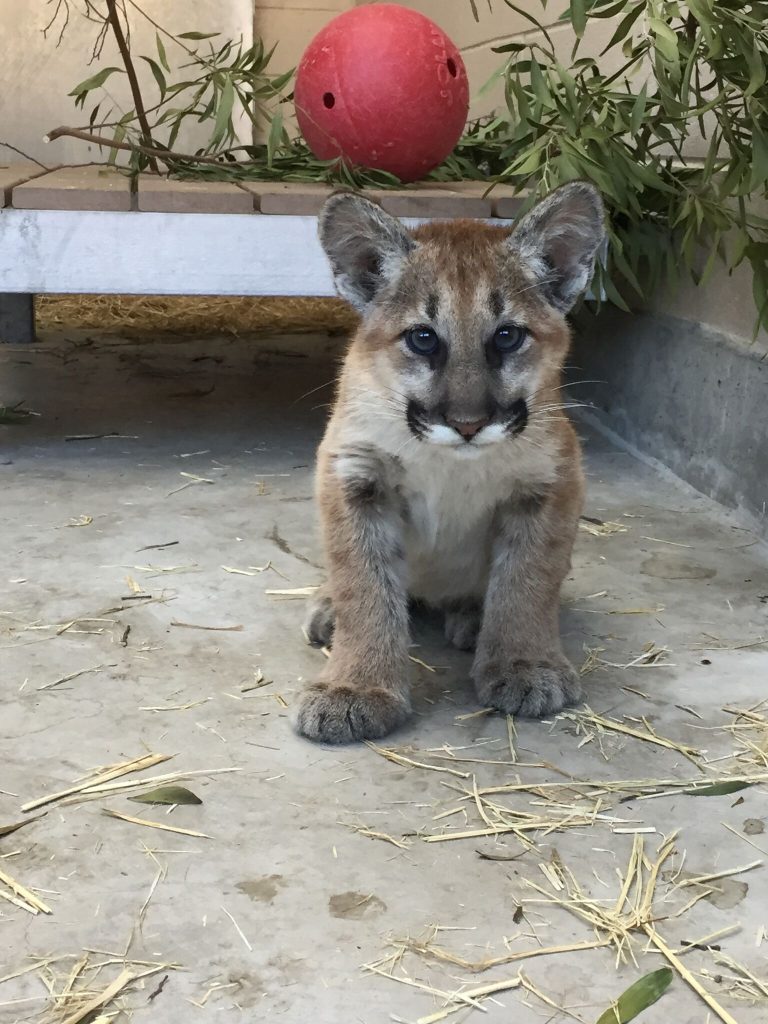 OAKLAND, CA – October 22, 2018 — Two non-related mountain lion cubs are being cared for at Oakland Zoo’s veterinary hospital after each was rescued by California Department of Fish and Wildlife (CDFW) in recent weeks.

The cubs, one male and one female, both approximately 9-10 weeks of age, are doing well and are being attended by Zoo vet staff around the clock. Because the cubs were orphaned too young to have the survival skills necessary for release, they will ultimately be permanently placed at an appropriate permanent facility when they are strong enough.

“We are so pleased that the Oakland Zoo was willing and able to play a role in saving the life of these cubs,” said Nicole Carion, CDFW’s Wildlife Rehabilitation Coordinator. “Returning injured or orphaned wildlife to the wild is always the ideal outcome, but in situations like this — where an animal is too young to have the necessary survival skills — placing it back in the wild would be a death sentence. In those cases, we rely on zoos with experienced wildlife specialists and resources to step in and provide critical care. These cubs are small and in need of a temperature-controlled environment where they can stay warm. The Oakland Zoo’s veterinary facility was exactly what these animals needed, at exactly the right time.”

The male, first to arrive in late September, is from Modoc County. The cub was orphaned after its mother, which was reportedly killing sheep in the area, was shot and killed under a legal depredation permit. In the state of California, a person who suffers property damage by mountain lions is entitled to obtain a depredation permit to protect their property.

The second cub, a female, was discovered in Lake County after a property owner heard ‘chirps’ from what he believed to be a bird over a period of seven days. Mountain lion cubs make a high-pitched ‘chirping’ sound when calling for their mother. The property owner did not disturb the animal until he observed the cub’s health was in serious decline. 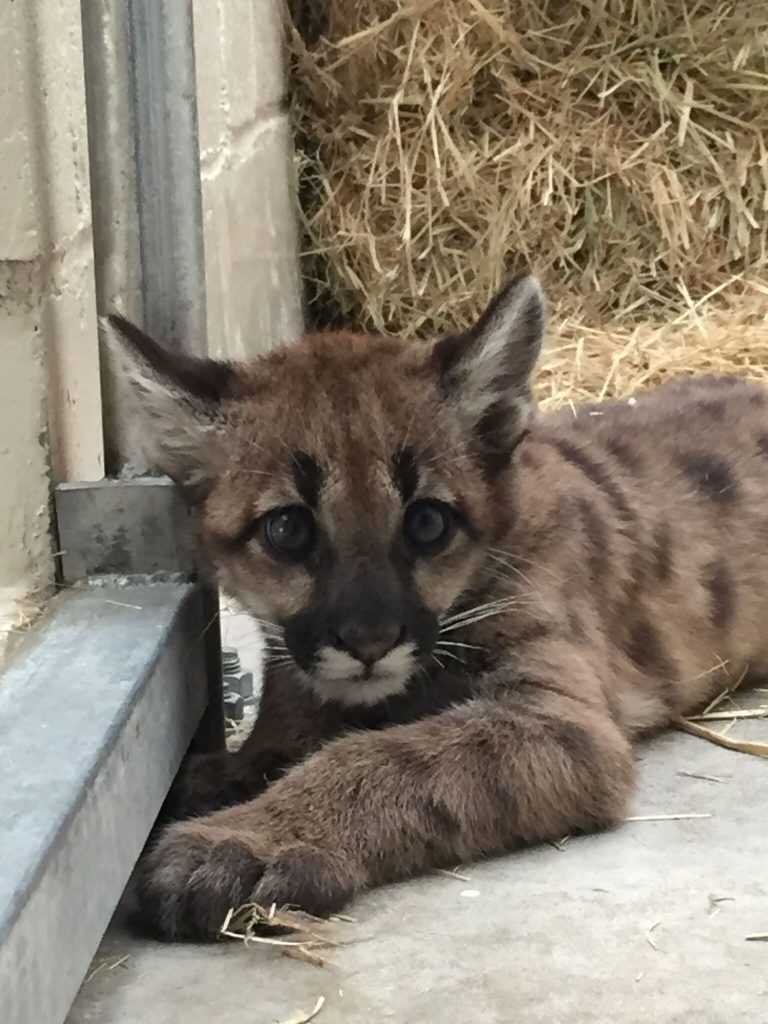 According to Katie Woolery, Assistant Director at Sonoma Wildlife Rescue, an adult mountain lion, struck and killed by a car, was discovered five miles away around the same time but it’s not confirmed that this was the cub’s mother.

CDFW placed the female cub with Sonoma Wildlife Rescue on September 12, where it was examined and treated. The cub was severely dehydrated, emaciated, covered in parasites and burrs.

“While we don’t know for sure what caused this female cub to become orphaned, we do know that one of the biggest threat to mountain lions in California is traffic, with 107 animals killed by automobiles in 2016 alone,” said Amy Gotliffe, Director of Conservation at Oakland Zoo.

On October 11, the female cub was transferred to Oakland Zoo to join the male cub already there.

Dr. Karen Emanuelson, Director of Veterinary Services at Oakland Zoo, reports that both cubs appear to be in good health. They are eating well, gaining weight (the male is now at 20 lbs. and the female is at 8.4 lbs) and playful. Once they were determined to be in good health, they were carefully introduced to each other and are bonding very well/ Mountain lions are social animals and find comfort in being together. Zoo staff recently tried a similar introduction between three unrelated mountain lion cubs rescued earlier this year. Those three are now living as a closely-bonded ‘blended family’ at the zoo’s recently unveiled California Trail expansion.

“We’re happy that these two cubs are doing very well, although it’s heartbreaking they were orphaned. We saw first-hand how much our now older mountain lions enjoyed, needed and bonded with each other as orphaned cubs themselves, so we are very glad these two cubs are providing companionship to each other as well. They are amazing animals, I feel so privileged and fortunate that we live with these amazing lions here in California,” said Dr. Karen Emanuelson.

Mountain lions are facing numerous threats in California, often struck by cars or at odds with humans in encroaching urban areas and developments. Oakland Zoo partners with the conservation organizations like the Mountain Lion Foundation and the Bay Area Puma Project to try and help conserve the species in the wild.

ABOUT OAKLAND ZOO’S MOUNTAIN LION HABITAT:
The mountain lion habitat in the Zoo’s expansion site is intended to mimic California habitat, educate visitors about wildlife in California and inspire people to take action for the future of the state’s wildlife and resources. It is one of the largest Mountain lion habitats in the world. The massive, covered habitat is boomerang-shaped with netting reaching 50 feet in the air, covering mature oak trees in which the mountain lions can
perch, rest, and climb. Rocky outcroppings that create caves allow them the choice to rest and hide if they prefer.

In addition to their night house in the evenings, they will have access to the expansion area, which will include some trees and platforms for climbing and resting. This new habitat one of the largest mountain lion exhibits in the world, and all the features focus on attributes of their lions’ natural environment.

ABOUT OAKLAND ZOO AND THE CONSERVATION SOCIETY OF CALIFORNIA:
Oakland Zoo, home to more than 700 native and exotic animals, is managed by the Conservation Society of California (CSC); a non-profit organization leading an informed and inspired community to take action for wildlife locally and globally. With over 25 conservation partners and projects worldwide, the CSC is committed to conservation-based education and saving species and their habitats in the wild. Oakland Zoo is dedicated to the humane treatment of animals and is accredited by the Association of Zoos and Aquariums (AZA), the national organization that sets the highest standards for animal welfare for zoos and aquariums.

ABOUT CALIFORNIA DEPT OF FISH & WILDLIFE:
The Mission of the California Department of Fish and Wildlife is to manage California’s diverse fish, wildlife, and plant resources, and the habitats upon which they depend, for their ecological values and for their use and enjoyment by the public.