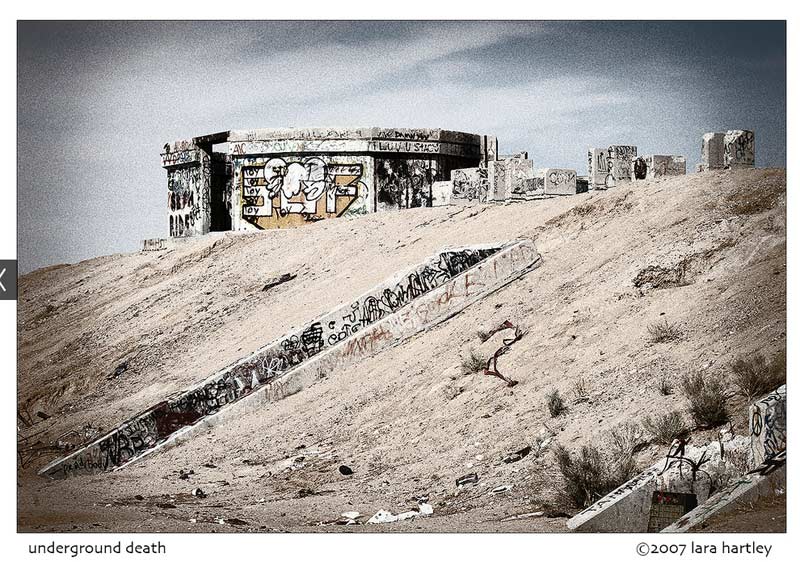 you can drive interstate 15 between los angeles and las vegas and never suspect just a short distance from the winding asphalt, bodies have been found.

“If there were to be a cross everywhere someone dumped a body, the desert would look like forest lawn [cemetery],” said a former san bernardino county sheriff’s deputy chief.

mine shafts open to nowhere, soft sands offer a quick burial; just ask the gangbangers from los angeles. or the gangsters before them. even a serial killer made the california and arizona deserts his killing grounds.

then there were the particularly heinous murders at the abandoned hawes radio tower facility near Highway 58 — as close to the middle of nowhere you could get and still be home by morning.

known as “the bunker” it was a party spot for local teens, somewhere vagrants could shelter and shoot up, a place you could go plinking at targets.

left over from world war II, hawes auxiliary field was repurposed as a low frequency communication system capable of relaying orders before, during and after a nuclear attack. it was permanently deactivated in 1986 as the cold war came to a close.

i first saw the ruins from a distance and thought “what’s that?” what that was turned out to be a solid mound covering a maze of hardened underground bunkers hiding disassembled generators, blast doors and odd machinery. broken whiskey and beer bottles partially submerged in ugly, oily water made walking treacherous.

a concrete tunnel led below and it was as dark as anywhere i have ever been. i turned off the flashlight and the darkness was smothering. i didn’t leave it off for very long.

it was also eery in some undefinable way. like a spider crawling on your pillow. the murders hadn’t yet happened but creepy graffiti etched into fire-blackened walls spoke of previous visitors; motorcycle thugs, vandals and those just trying to keep warm.

if people who interact with a space leave some of their molecular energy behind, bound with the inanimate objects that surrounded them, the bunkers at hawes were crawling with zappy little electrical charges. not ghosts. not from dead people. just hissing echos of the living.

there was nobody around when i was exploring. i could see the stark horizon in an unending blue sky from the top of the mound and no dust announced that a car was headed my way down the dirt track. but that scritchy feeling at the back of my neck was telling me to not linger long. if i was not paying attention, it would have been easy for someone to sneak up behind me in one of the dark narrow halls while i was prowling about.

a year or so later i brought a new reporter who was from back east, out to show her one of the oddities of the mojave. she agreed it was indeed creepy but interesting. i felt safer with someone else along.

it wasn’t until January 2008 when most parents and adults became aware of the hawes bunker — when Collin Lee McGlaughlin and two others executed teenagers Bodhi Sherzer-Potter and her boyfriend, Christopher Cody Thompson. a night of innocent partying had turned deadly for two regular kids hanging out with friends — and three strangers.

a quote from McGlaughlin’s mySpace blog showed how disturbed, even evil, he was. “i feel that if a person really needs it they should be able to walk down the street with a .357 killing people at random.”

under his dec. 2, 2013 plea agreement, McGlaughlin will spend the rest of his life in prison with no chance of parole.

the bureau of land management and the air force razed the bunker in April-May 2008.

all that is left are the eroding remains of the auxiliary airfield’s aged runways.