In her post about Whitewater Canyon and River, Lynn Bremner mentions how her frequent passing of the “Whitewater” exit sign on I-10 drew her to explore the Canyon.  I understand being drawn to a location; I felt compelled, as are many, to explore the Zzyzx Road area outside Baker, California, solely due to the enigmatic “Zzyzx” name (to be described in a future post).  Something else, however, brought me to Whitewater Canyon (Note: on USGS maps, “Whitewater” is shown as one word and two).

In January, 2010, we took relatives visiting from the east coast out to the desert to geocache, visiting such strangely named locations as “The Great Wall of DHS (Desert Hot Spring)”.  One geocache was high in the hills along the dirt service roads for the windmills in the area (either the “Wind Power” or “Whitewater View” geocaches).  The drive towards the top of the hills provided close-up views of the windmills that you do not get by driving on the valley floor on I-10.  The hills on which this group of windmills are located are shown on USGS maps as Whitewater Hill (elev. 1734 ft) and Painted Hill (elev. 2385 ft). 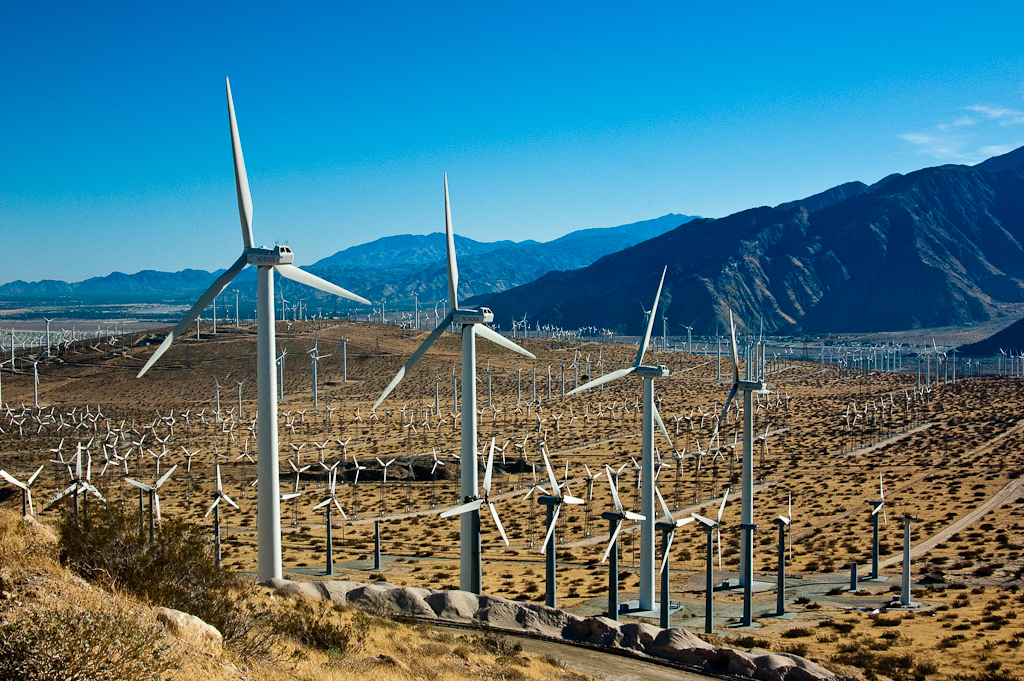 View of Windmills from Whitewater Hill above the Coachella Valley

Near the geocaches, the road ends.  Everyone else searched for the geocache while I took pictures.  It was then that I overlooked the high dirt wall not really knowing what to expect.  The dirt walls are pretty high and hard to see over.  I pushed myself up the dirt wall by climbing up the nearby rocks while hearing the typical “be careful” from my wife.  When I reached the ridge, what I saw below was the Whitewater Valley discussed by Lynn and some distant peaks as high as 5000+ ft. 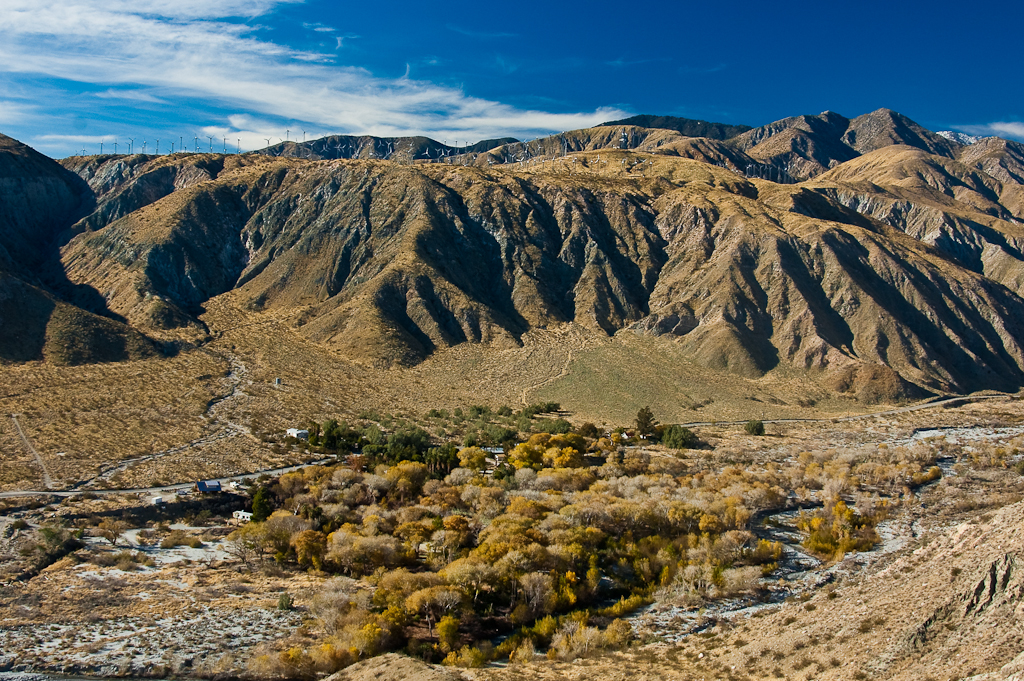 In February, 2010, I found the time to make it back to the area to explore the actual valley.  I was alone.  The park at the end of the road was pretty empty and a cross of the Whitewater River wash was required.  Depending on seasonal snow and rain, a small waterfall may be visible in a shadow on the east side of the road after crossing the wash (inbound). 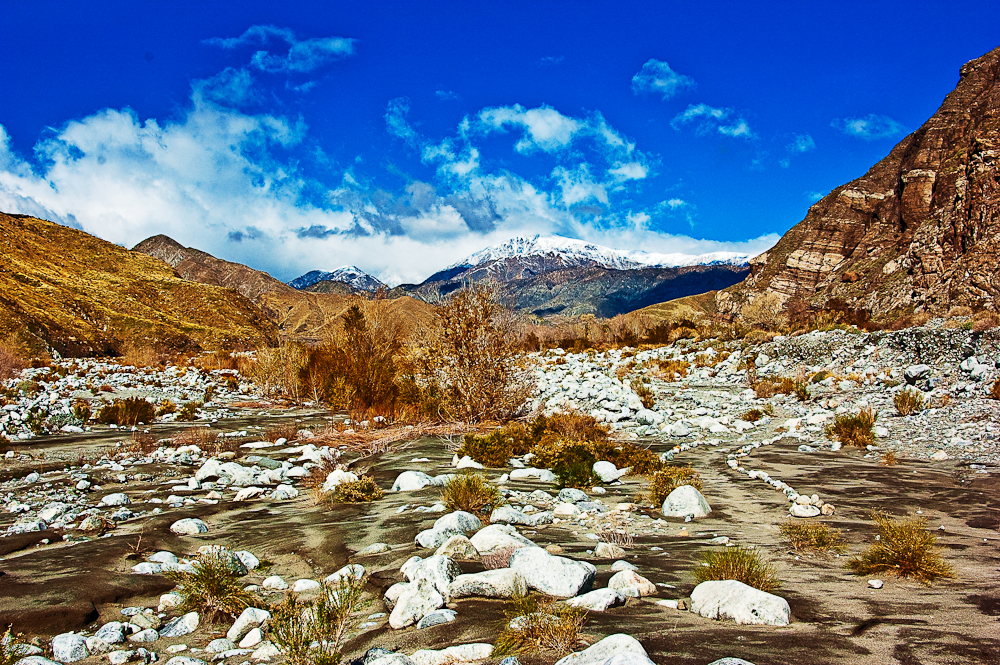 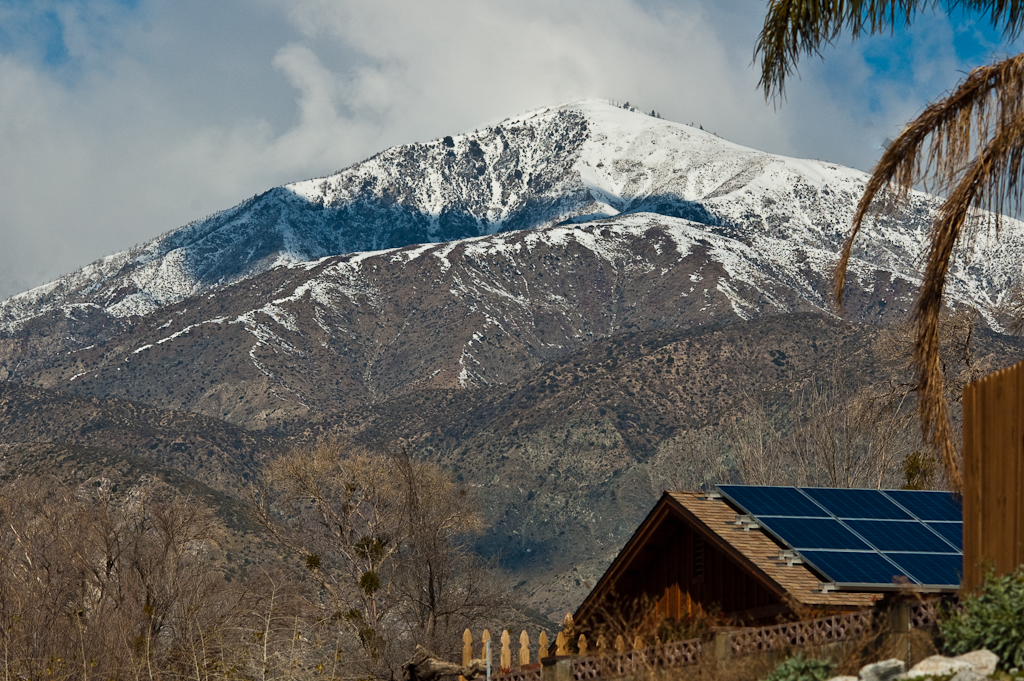 With a well-shaded picnic area next to the once-trout pond (what is now the Whitewater Preserve is shown on the 1996 USGS 1:24000 White Water Quadrangle Map as the Whitewater Trout Farm) and the partial shadow of the mountains across the road, I realized that this was a place to come with the wife and dog and a picnic basket.  That is what we did in early April.

On the north side of the parking lot, is the trail head leading towards the mountains and the merger with the Pacific Crest Trail, the hiking trail extending from the Mexican border to the Canadian border, through California, Oregon, and Washington.  From an easily accessible spot on the trail, we saw the bighorn sheep roaming the top of the mountains to the west about 500 feet above us. 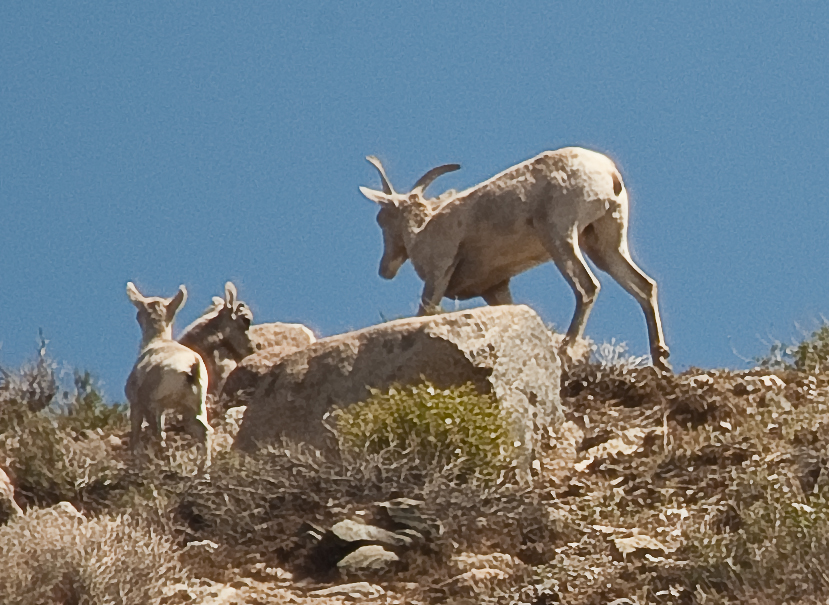 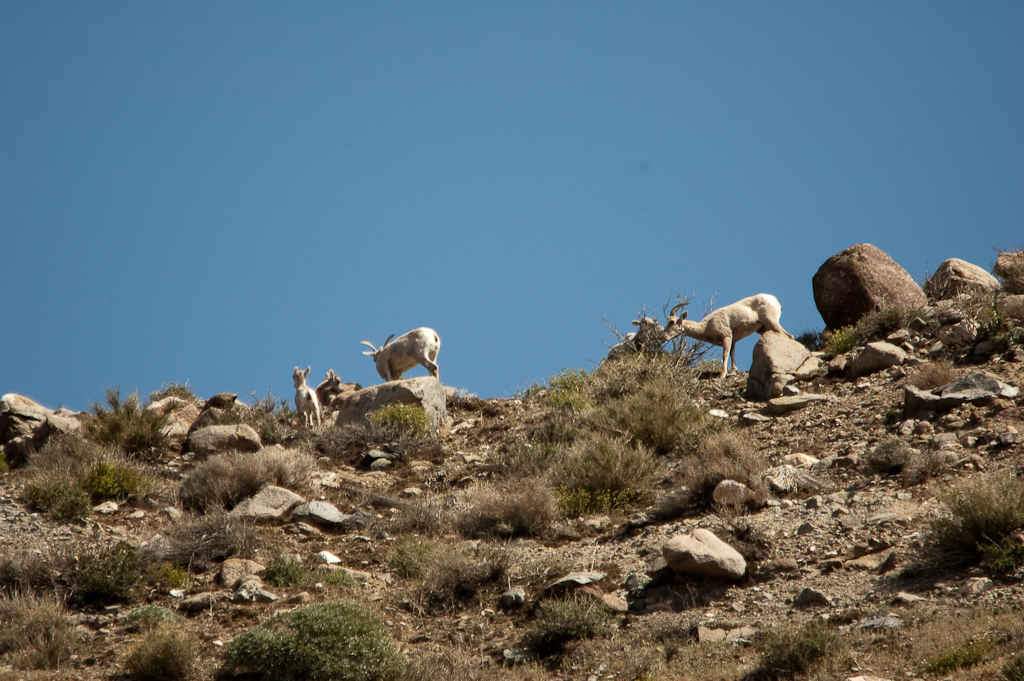 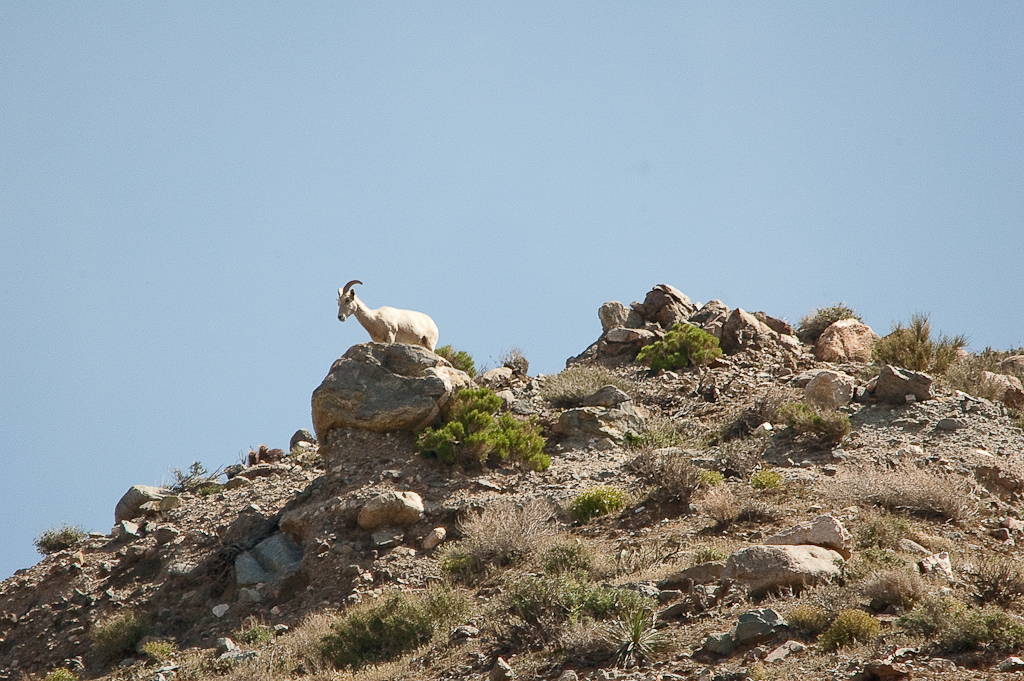 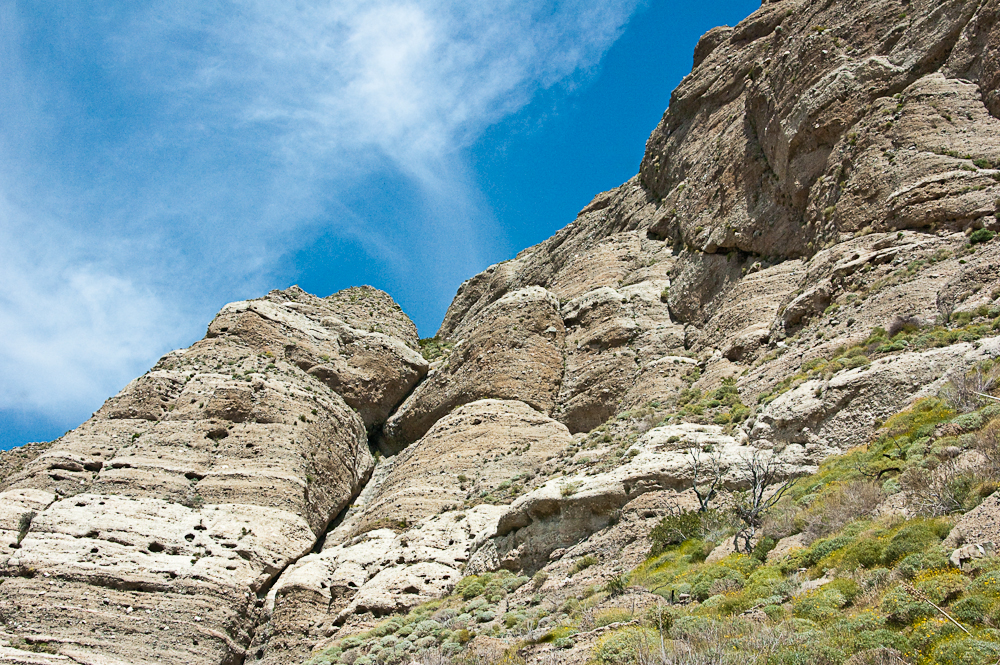 Mountains east of Whitewater Preserve where the Bighorn Roam

On the south side of the parking lot, is the picnic area and walking meadows. 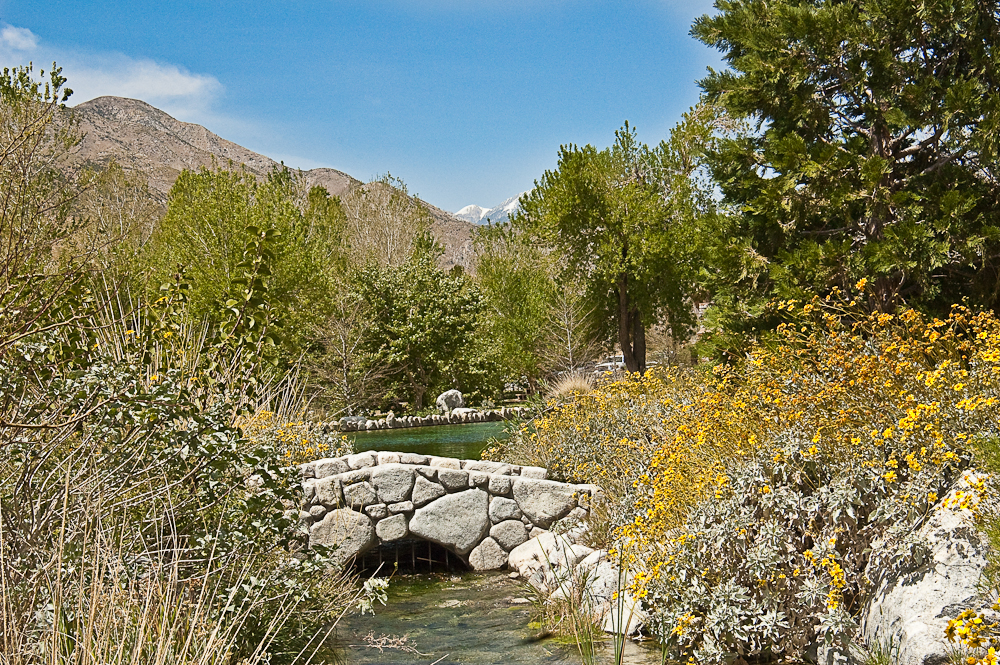 Pathway over a flowing portion of the Whitewater River 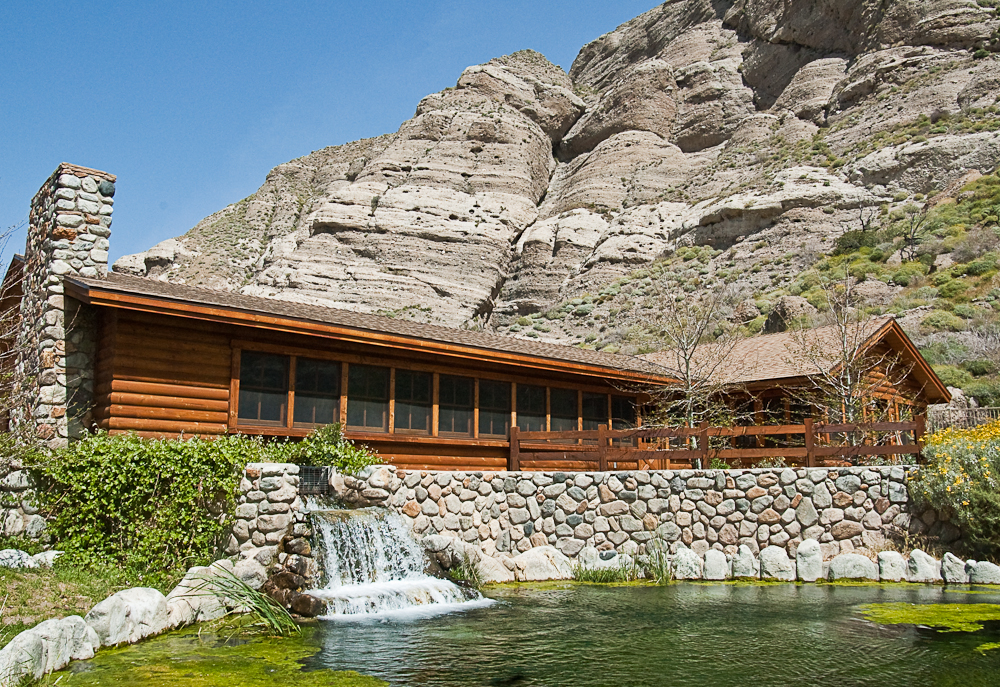 If you have some time to kill while in the Palm Springs area, take my and Lynn’s advice and head towards Whitewater and tell us about your trip.