Sorry to have not posted here at DUSA for a while.  However, this post could not be more timely.  This post discusses the pitfalls of wildflower hunting and it is currently wildflower season.

I have been to Anza-Borrego Desert State Park quite a number of times since I discovered it, back in 2008.  OK…not “discovered” as in the Juan Bautista de Anza sense.

On Saturday, April 6, 2013, I went to ABDSP with the primary goal of spotting wildflowers.  Its still a little early to see Bighorns roaming around.

Reports are 2013 has not been a good year for wildflower sightings.  What flowers there are, are not visible directly from any of the park’s roads; you had to get out and walk a bit.  One place where flowers were reported to be, was Grapevine Canyon.  I had never been in the Grapevine Canyon.  The ABDSP Travel Guide (Lindsay 2006) says that Grapevine Canyon has the “largest, densest, and most varied displays of succulents.” 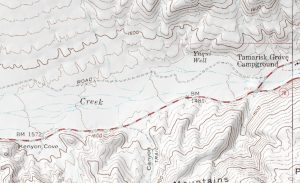 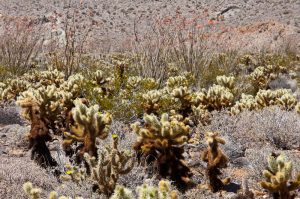 Ocotillo in the background; teddy-bear cholla in middle; silver cholla in foreground

Grapevine Canyon Road (GCR) is not as much road a a dirt and rock trail.  It begins behind the Tamarisk Grove Campground off of Yaqui Pass Road and passes between the diverging (or converging, depending on whether you are traveling east or west) CA78 and the Pinyon Ridge. Grapevine Canyon Road partially coincides with the dry wash of San Felipe Creek.

So, I turned west off of YPR, traveled through the Tamarisk Grove Campground, and then between the think brown plastic markers that identified the beginning of the GCR.  Bumping, rocking, shaking, and twisting my way down the road, I saw campers (vehicles) parked along the road-side campgrounds.  However, no actual campers were seen.

Though GCR is rugged and remote; remarkably, you are never out of sight or sound of Highway 78.  Indeed, there was some kind of law enforcement action going on over the 78.

In most spots, the trail is one narrow lane.  At one point, an SUV was coming eastward, towards me, and the road wasn’t wide enough for the both of us.  I started to back up to find a camping spot where I could back in.  Fortunately, the driver of the other SUV, pulled into a side space before I could and he allowed me to pass.  We gave each other that friendly wave that says had we been anywhere else, we would have ignored each other.

At some point the blooming cactus colors began and I decided to take some shots.  No, not do shots, but take some (i.e., pictures!).  Interestingly, doing shots would have reduced the pain I was about to be inflicted (afflicted?) with.

There was plenty of space between the plants, mainly: teddy bear cholla, ocotillos, prickly pear cactus, barrel cactus, and assorted others.  For about 10 minutes I was snapping away.  The sun was strong (I was wearing my hat), but there was a nice wind.  This area was far cooler than the area of the park’s Visitors Center, which is at about 1000 feet lower in elevation than the Grapevine Canyon.

I was looking through the camera; straight down, at a cholla flower, and I could see through the viewfinder that my camera strap was blowing from the wind into the frame.  So, I tried to flick the strap out of the way.

The strap hit a portion of the cholla and the cholla, as cholla are prone to do, it stuck to the webbing of the strap.  No biggy, I just tried flicking the strap so the cholla would land on the ground somewhere. 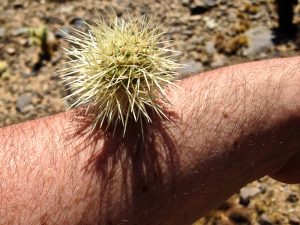 BUSTED!  As great plans often go to @#$!, so did this one (though maybe it was not such a great plan).  Next thing I knew I felt the pains on this unfortunate cholla landing zone…

As stupid as it seems after the fact, the first idea I had was to just try to grab the cholla ball with the other hand to remove it.  The instant pain…now in the right hand as well as the left arm, reminded me just how stupid the plan of grabbing the cholla ball actually was.

Standing there alone in the sandy wash and surrounded by hundreds of these cacti, I did feel a sense of dread.  I was not exactly sure what to do next and I was not going to take this ball of pain into the car.  So, even though less than two months ago I had posted in an article about chollas on my own blog including videos of people removing cholla needles from their skin (as comic relief), I don’t think I actually watched the videos so I did not know what they did, other than say use tweezers to remove individual spines.

Though I usually don’t carry a knife with me when I am out, I did today.  I opened it up and began trying “Scrape” the ball off.  This did hurt and you could see the skin being pulled upward as the knife tried to separate the spines from my arm.

The cholla ball finally came free only to get stuck on my boot.  But, that was a pretty painless removal. 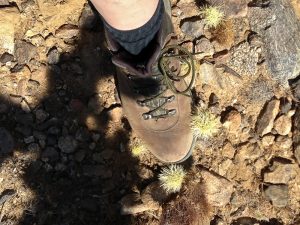 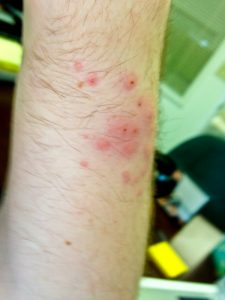 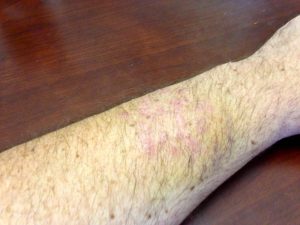 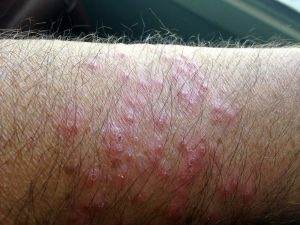 And now for the wildflower pics… 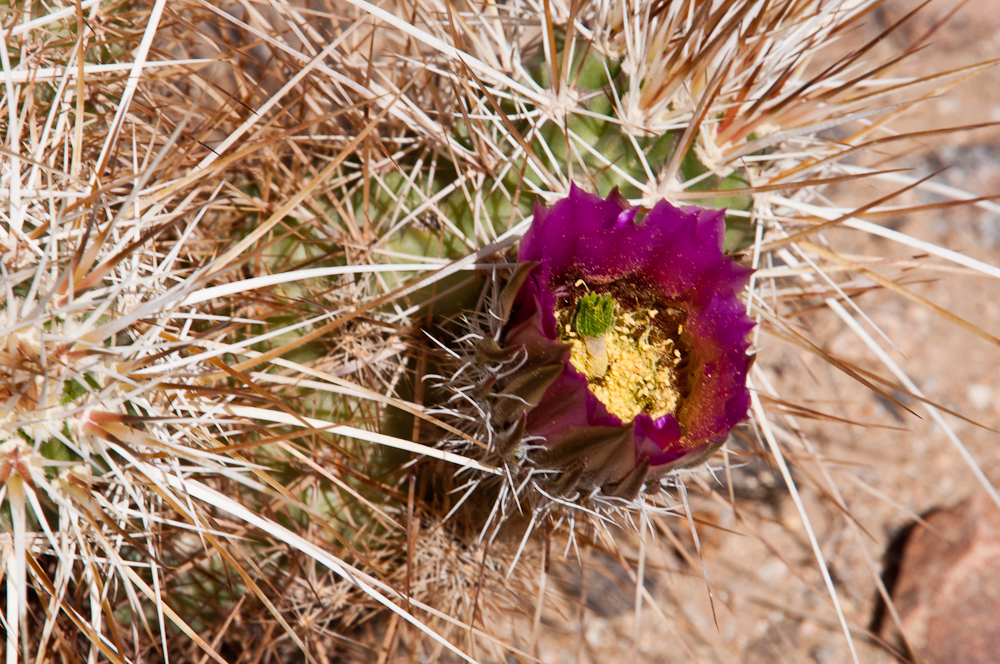 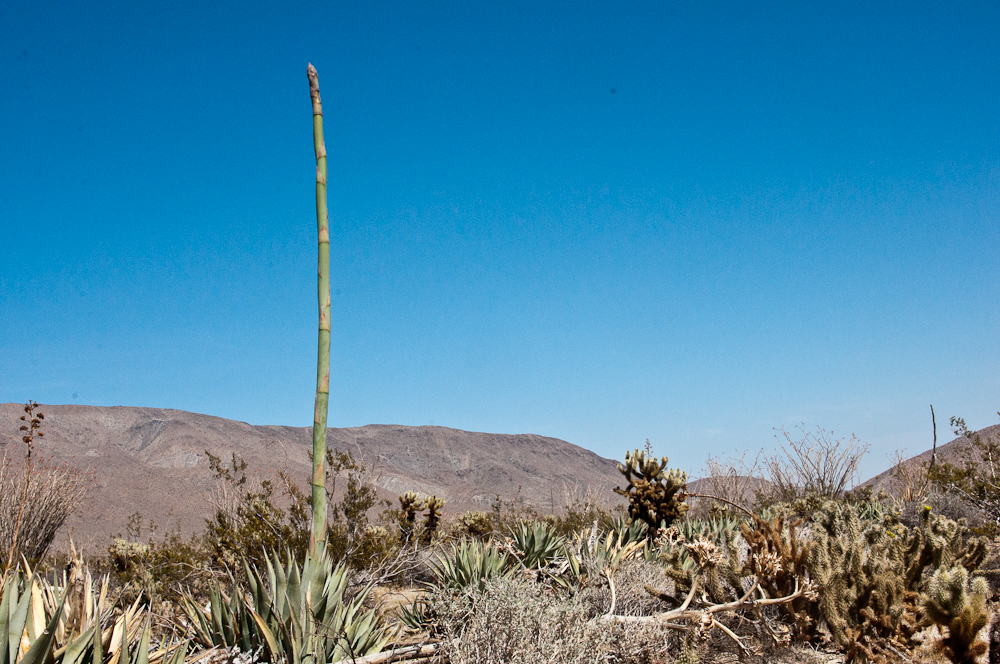 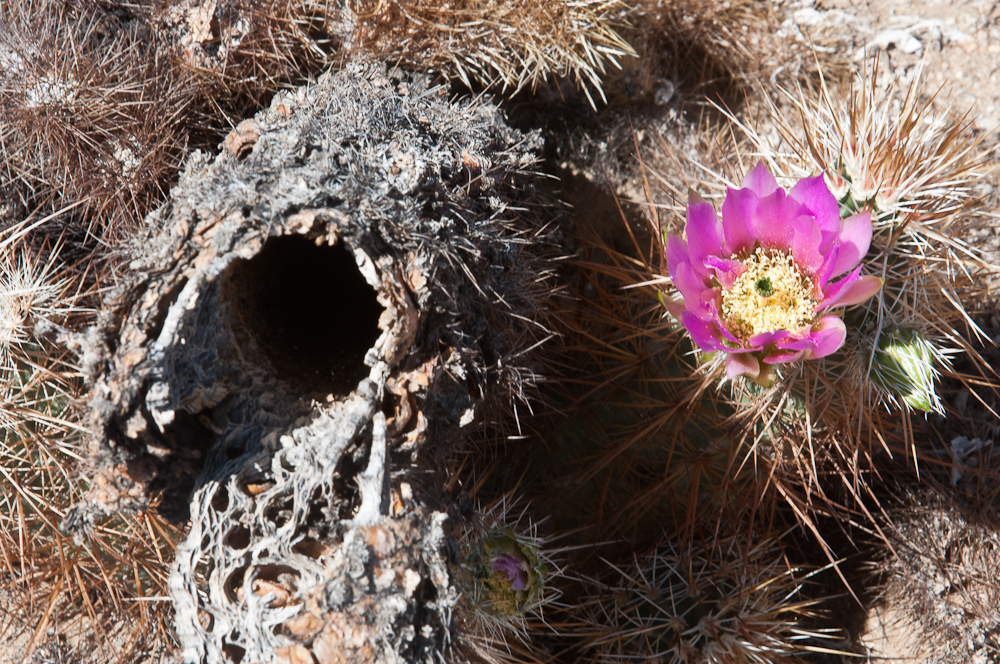 Dead and Budding Hedge-Hog Cactus Not Sure – Can anyone help? 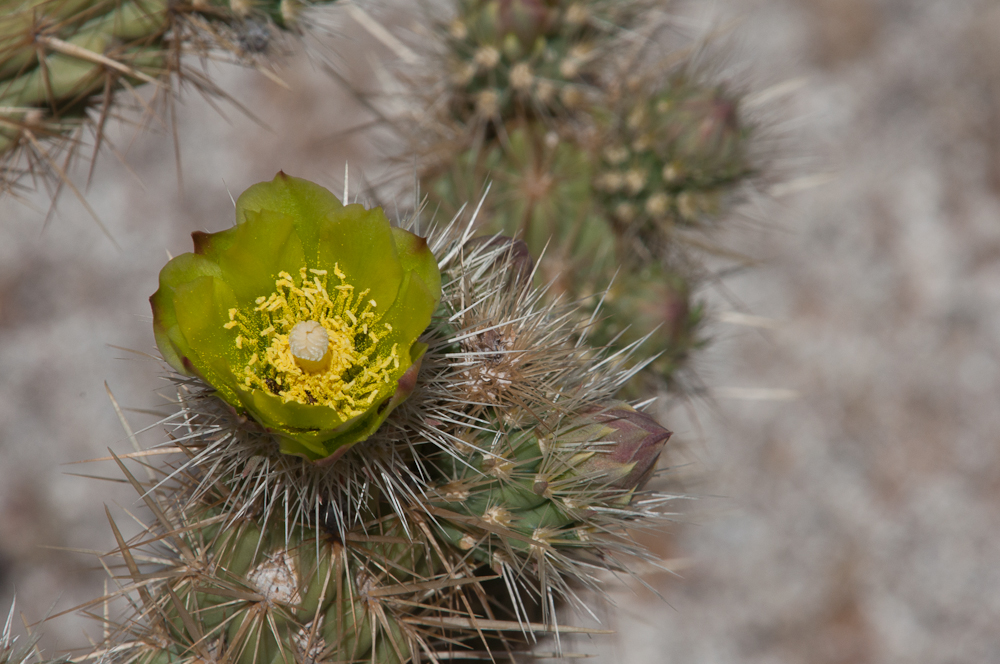