Click here to view a VIDEO of our day trip to Anza-Borrego. 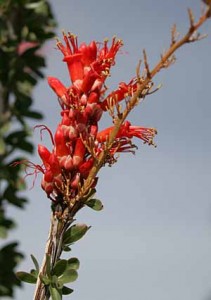 A red bloom on an Ocotillo along the S22.

After the recent rain we’ve had here in the California desert, naturalists are predicting an excellent wildflower season.  The Anza-Borrego Park Rangers report that the peak bloom will occur between the last week in February and the second week in March.  This three-week window will be the best time to visit the desert parks to view and photograph the wildflowers.

Today the DesertUSA Staff took a quick day trip into Anza-Borrego Desert State Park.  We were able to see signs of the pending blooms.  There were a handful of desert lilies that had started to crop up in the sand dune areas.  The desert lilies didn’t have any flowers yet, but a couple had buds starting to sprout up.   The ocotillos were very green and starting to show some blooms along the S22.  There was a snow-capped mountain in the distance that added to the scenery of the desert landscape. It made a nice backdrop in the photos I took of the ocotillos.    We saw a few purple sand verbena in a of couple spots, with a lot of green all around.  On my way in on the 86S I saw a few yellow brittle bushes in bloom, but not much else along the roadways.  The purple carpets of past seasons will start to show color in a few weeks.  It is still too early to see much yet.

One of our fans on Facebook suggested we check out the Clark Dry Lake as it was not dry this week.  The recent rains filled the lake with water and we received reports that the Rockhouse Canyon Rd. was impassable after the quarry.  I guess it was under water.   We were able to drive far enough to get a few shots of the lake from a distance with the mountains in the background.  There were a number of RVs parked near Clark Dry Lake in random spots.  We saw several people sitting in lawn chairs next to their RVs enjoying the views around them.  It was a beautiful day today in the park and it is expected to be around 76 F this weekend.

Click here to view a VIDEO of our day trip to Anza-Borrego.

A red bloom on an Ocotillo along the S22.

Ocotillo with scenic hills in the background.