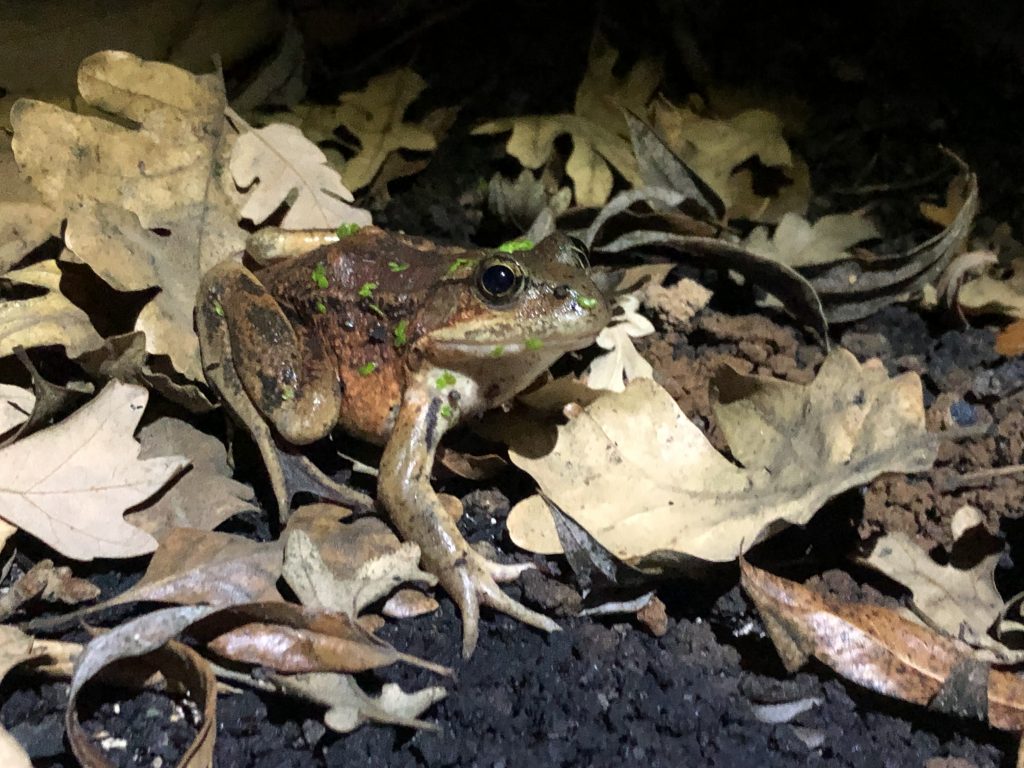 THOUSAND OAKS, Calif – Seven months after the Woolsey Fire, an initiative that began in 2014 to reintroduce the threatened California red-legged frog (Rana draytonii) into the Santa Monica Mountains is struggling to regain its footing after perhaps hundreds of frogs perished. Photos here.

In the weeks prior to the fire, the rare amphibians were flourishing, happily eating insects, and reproducing on their own in two of the four streams spread throughout the mountains. Then the fire struck and burned up much of their habitat. This was immediately followed by a season of heavy rainfall, which caused debris flows that filled the streams with silt and mud.

It ended up being a double whammy for the long-time project which sought to bring back frogs that had not been living in the Santa Monica Mountains since the 1970s. It would be an understatement to say the fire made their habitat less hospitable. This species is both federally threatened and a state species of special concern.

Three of the four reintroduction streams were “annihilated,” according to Katy Delaney, a National Park Service ecologist who has been leading the project for more than five years and is now contending with essentially starting over with her study.

“With three of the four sites, there is no aquatic habitat left and not much vegetation,” she said. “I don’t even know if they are alive. They were doing great before the fire.”

There were frogs living in each of these streams – from tadpoles to grown adults. After the fire, she saw one lone frog straggling in one of the reintroduction streams. Another biologist witnessed another single frog post fire and post debris flow from the rains at another site.

“If there is a frog here and there, that’s great but there are no breeding pools left,” Delaney said. “They are all filled in with debris.”

The amphibians are listed as threatened under the Endangered Species Act. A population discovered north of the 101 Freeway in the nearby Simi Hills in 1999 has been used to replenish the species in four spots in the mountains for the past five years. The idea was that translocated populations would eventually mature, mate, and reproduce on their own.

A pivotal moment for the project came in March of 2017 when the first egg masses were found in one of the reintroduction streams. This was the first known evidence of the species breeding in the Santa Monica Mountains without the help of humans.

The first translocations of egg masses were collected from the source population and put into two streams in 2014. Two additional reestablishment sites on California State Parks land were later added.

The silver lining to the otherwise doomed project seems to be the source population in the Simi Hills. Although that location was also burned in the fire, it’s located at a lower gradient, which means the canyon is not as steep and the debris flow is minimal in comparison to the sites in the Santa Monica Mountains. The frogs there seem to have survived relatively unscathed.

During a night survey that was done in December of that particular area, biologists found 90 frogs in the charred landscape. Delaney even danced a jig as she and another biologist kept counting the frogs as they walked beneath blackened trees and brushed past sooty branches. This proved to be a happy surprise during what was otherwise a generally gloomy period for Santa Monica Mountains National Recreation Area, of which 88% of the National Park Service land burned in the fire.

In February of this year, after the federal government reopened after a month-long shutdown, the team of biologists discovered six egg masses in the source population – an astounding discovery. But Delaney did not want to take the frogs or egg masses in the source population for granted. She thought the frogs looked skinny and that they weren’t going to breed.

Also, there were many more storms still left in the forecast and egg masses typically don’t do well in severe weather conditions where they could be easily washed away.

She enlisted the help of the Santa Barbara Zoo, a partner in the study, and a plan was made to transport 1,000 eggs and let them hatch into tadpoles in quarantined tanks at the zoo.

They took the tadpoles that had been hatched at the zoo and split them up between two of the reintroduction sites – the one that remained relatively unscathed and another one that suffered a lot of damage.

California red-legged frogs require deep pools of year-round water, which are not easy to find in the arid climate of the Santa Monica Mountains. Many of the streams in the Santa Monica Mountains are infested with non-native species like crayfish, which can prey on frog eggs and tadpoles. Biologists looked for other pools of water to replace the previous ones burned in the fire but could not find any that matched the description of what they were looking for.

Since the tadpoles were deposited in those sites a couple of months ago, there have been no signs of them. But that is not unusual, Delaney says.

Santa Monica Mountains National Recreation Area (SMMNRA) is the largest urban national park in the country, encompassing more than 150,000 acres of mountains and coastline in Ventura and Los Angeles counties. A unit of the National Park Service, it comprises a seamless network of local, state and federal parks interwoven with private lands and communities. As one of only five Mediterranean ecosystems in the world, SMMNRA preserves the rich biological diversity of more than 450 animal species and 26 distinct plant communities. For more information, visit www.nps.gov/samo.