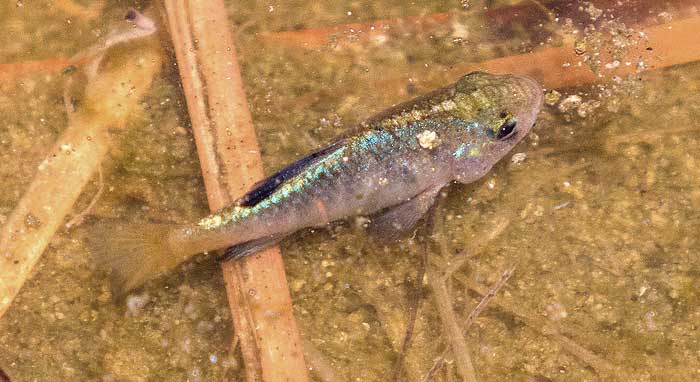 The desert pupfish is a small, silvery-colored fish with 6 to 9 dark bands on its sides. This tiny fish grows to a full average length of only 2.5 inches. Pupfish develop quickly, sometimes reaching full maturity within 2 to 3 months. Although their average life span is 6 to 9 months, some survive more than one year.

Pupfish feed on brown and green algae. During winter months, when the water is cold, they become dormant, burrowing in the muddy bottom of their habitat.

As spring approaches and the water warms, pupfish become very active and begin their mating ritual. The breeding males become iridescent blue in color and defend their territory, chasing away all other fish except females that are ready to spawn. Spawning starts towards the end of February and continues through summer.

As temperatures become extreme toward summer, evaporation dries up most pools and streams, resulting in the deaths of most of the pupfish. A few survive in the small number of pools, streams and springs that do not dry up completely.

The various species of pupfish serve as evidence that a series of prehistoric desert lakes were once interconnected. This genus speciated when the Pleistocene lakes evaporated around 10,000 years ago, isolating different groups from each other. Among the 13 know species of pupfish, C. macularius and C. diabolis (the desert hole pupfish) are the most well known.

Several species of pupfish are endangered by desert development and the introduction of exotic fish species into their habitat. Pupfish are protected at various locations in Death Valley National Park, including Saratoga Springs, Salt Creek and a totally distinct portion of the park located in Nevada's Ash Meadows NWR in the Devil's Hole. Pupfish can also be seen at California's Anza-Borrego Desert State Park.

Watch video on the pupfish