In 1985 some friends and I went on a desert camping trip to the old mining site of Borate which is located about 3.6 miles east of Calico Ghost Town, California.

Our camp site was located on top of a high mound of greenish colored mine tailings. In these tailings I found a number of interesting and unusual rocks which appeared to be sedimentary in nature and symmetrical in shape.

Abrading these rocks resulted in a petroleum-like odor. 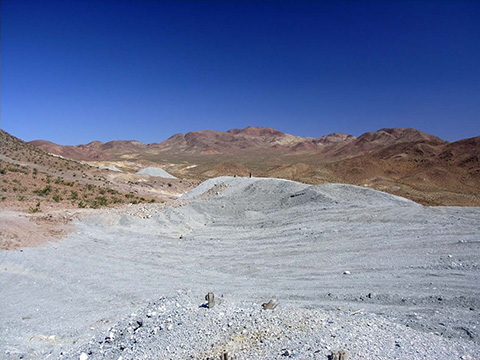 Nodule collection area on tailings pile. Calico Peak is in the background.

Some years later, while going through some old issues of Desert Magazine, I came across an article titled "Fossil Insects from the Mojave" by Ruth A. Kirkby in the January 1959 issue. The article indicated that these odd rocks were nodules from the "Barstow Formation" and were formed in the Miocene Epoch some 10 to 50 million years ago. The major significance of these rock nodules is the fact that they contain a very rare form of insect fossil. These fossilized insects are in the form of silica and are in a three dimensional state, often retaining wings, legs, antennae and colored markings. This type of insect fossil is found nowhere else in the world! 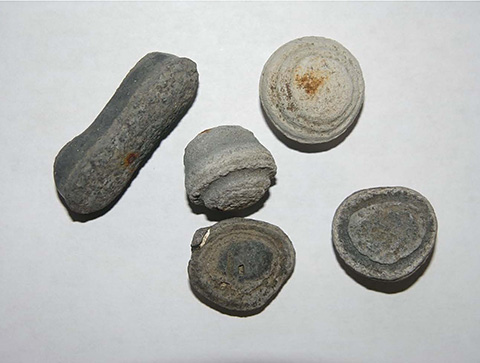 Typical nodules which are 1 to 2 inches in size.

Having found this article quite fascinating and ready to investigate the possibility of finding some of these fossilized insects, I purchased a low power, stereo microscope and a digital microscope camera.

The fossils are obtained from the nodules by dissolving the largely calcium carbonate nodules in swimming pool grade muriatic acid (hydrochloric acid). Nodule dissolution takes about 20 minutes and is accompanied by vigorous out gassing and the strong odor of petroleum due to the petroliferous nature of the nodules. Once the nodules have dissolved, the remaining insoluble residue is washed with water and examined with a microscope for fossilized insects or insect parts. The majority of the insects found will be aquatic larval forms of the water beetle, Schistomerus. Interestingly, besides finding fossilized insects and insect parts, I have found a few insects and insect parts that were not fossilized but were soft and pliable. These appeared to have been preserved by small blobs of petroleum-like material with which they were associated. A few fossilized flying insects with wings were found as well as some very tiny spiders and some yet smaller mites. The size of these insect fossils was about 1/10 inch or less.

The following photo is what appears to be some type of leaf hopper. This is one of those unusual findings in which the insect, rather than being fossilized, appeared to be preserved by a petroleum-like substance. 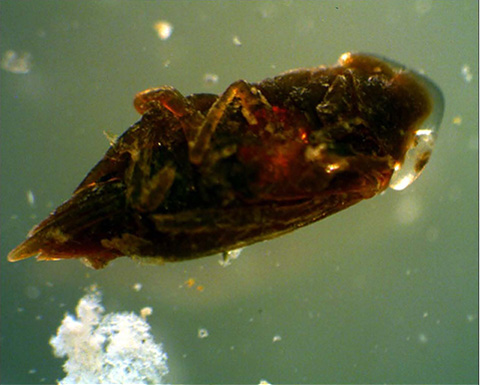 The following is a photo of a typical fossilized Schistomerus beetle larva.

At this point, the best specimen that I have found is that of a small, flying insect. It retains its 3 dimensional shape, wings, legs and colored markings. The following two photos, and the one at the top of the page, are of that insect fossil. 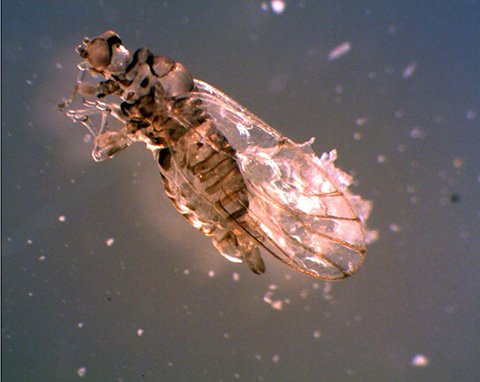 Flying insect fossilized in silica. (above and below, and at top of article) 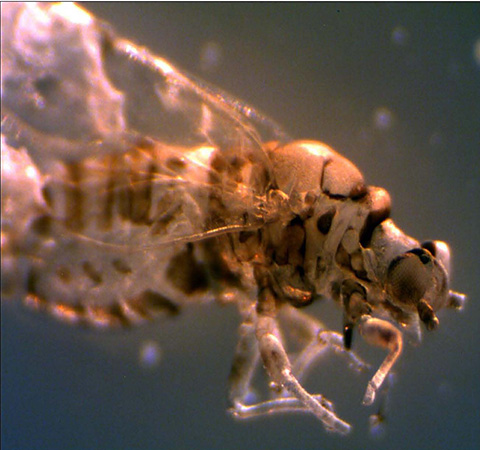 It is odd to think that this insect was flying around some 13 million years ago (estimated), long before human beings had ever evolved. And yet, here it is, nearly perfectly preserved in silica. Quite a remarkable and exquisite specimen!

The last photo is that of a tiny, fossilized spider, looking as though it were made of glass. 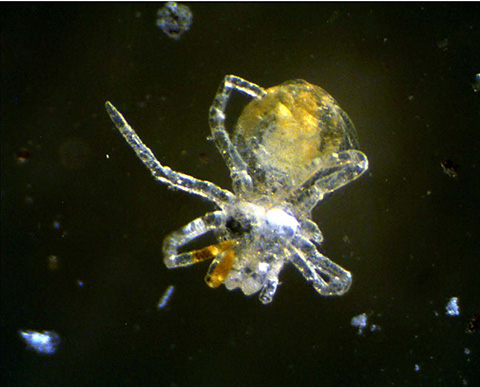 So there are some unusual fossils to be found in unexpected locations in the Mojave.